The Monkey and the bell

The monkey and the bell:

A classical story from Hitopadesha tales which says that nobody should be afraid of every small thing. Intelligence and courage can conquer fear in our life.

Once upon a time there was a robber in a small village. He  used to steal at night in the village. All the villagers were worried because of this robber. Everyone wanted to get rid of these robbers. 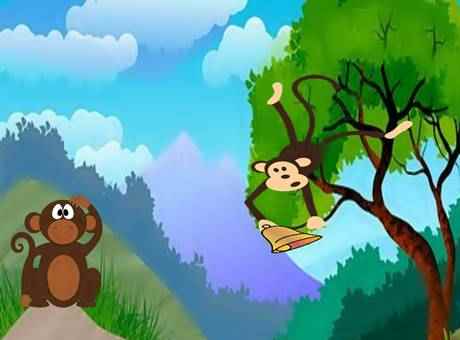 One day he stole a huge bell from the temple and ran towards the forest. The tiger heard the loud bell sound and was curious to know where the sound came from. The robber who was running to keep the bell safe did not notice the tiger standing close to him. The tiger pounced on him and killed him at once. The tiger did not bother to look into the bell as it had good food.

The bell fell on the ground in the forest. After a few days a group of monkeys were passing in the same route. They saw the bell and picked it up to see it. The monkeys were very happy to see a strange thing and so took it to their home.

One day the villagers were worried about the sound. They did not know where the sound was coming and who was making the sound.

Continue reading The monkey and the bell

The villagers found the dead body of the robber and got very scared. The villagers decide, “ There is an evil spirit in our village which kills human beings and later rings the bell as a signal.”

But there was a bold woman in the village who wanted to get rid of this evil spirit. The woman thought that, “ I will find out who is ringing the bell at night.” Later she went deep into the forest and waited for the bell to ring. To her surprise the woman saw a group of monkeys ringing the bell.

The woman was very happy to see the monkeys making the sound. She understood the secret of the sound and realized that there is no evil spirit.

The woman went to the king and informed him that, “ Your Majesty, I saw the evil spirit last night and I am pretty sure we can catch this evil spirit by worshiping the Gods.  But this would cost some money. If your majesty could grant me some money then I will kill the evil spirit and bring back the happiness in the village.”

The king who was concerned for the villagers and who wanted to get rid of this demon granted the money to the lady.  The woman was very clever and on receiving the money she bought some peas, fruits and groundnuts.

To fool all the villagers, the woman made a circle on the ground and kept all the eatables inside the circle and did some rituals. After doing all the rituals the woman took the eatables and went inside the forest.

The woman kept all the eatables under a tree and she hid behind another tree.  The monkeys were very happy to see the eatables and ran to pick the fruits and nuts. When they were running the monkeys dropped the bell to the ground.

All the villagers came back to their village and there was no noise from that day. All villagers lived happily thereafter.

Moral: One must not be afraid of trifles, Intelligence and courage succeed against all troubles.