Engineering in India. After Independence Govt of India tried to promote higher and skilled education.  In this process, some of the following prestigious institutions have in different fields have been set up and nurtured:

1.      Prestigious Institutions in field of Engineering:  Based on the level of proficiency the Engineering colleges can be grouped into three levels.

Under level 1 colleges one can group IITs/ IISc/ IIEST.  First IIT to be set us was IIT Kharagpur in the year 1951.  IIT Bombay was the next to be set up in 1958.  IIT Kanpur and IIIT Madras were set up in 1959 while IIT Delhi was set up in 1961.  IISc - Indian Institute of Science (earlier known as Tata Institute) was founded in the year 1909  by Jamsetji Nusserwanji Tata, the Government of India, and the Maharaja of Mysore and the Institution is located at Bangalore.  Until 2008, when the Government declared 6 more new IITs, there were only 5 IITs (IIT Kharagpur, IIT Bombay, IIT Kanpur, IIT Madras, IIT Delhi and IISc Bangalore) and IISc serving the country for 5 decades.  Today there are 23 IITs all over India and they are located at Bhubaneswar, Bombay, Bhilai, Delhi, Dharwad, Dhanbad  Gandhinagar, Guwahati, Hyderabad, Indore, Jodhpur, Jammu,  Kanpur, Kharagpur, Madras, Mandi, Patna, Phalghat, Panjim,   Roorkee, Ropar, Tirupathi, Varanasi.  IITs offer courses in graduations and post graduations while IISc offers for post graduation.  Both IITs and IISc offer doctorate.

It is an undisputed truth that 21st century belongs to Information and Technology (IT).  Govt of India has been quick to recognise the same and in the process to align the academics with the potential future needs of the industry, Govt of India has tried to carve out specific institutes for higher learning in India in the field of Engineering by creating Indian Institute of Information and Technology (IIIT).  It is interesting to notice that Govt of India has chosen the path of Public Private Partnership (PPP) so that there is continuous involvement of private sector in academics so as to keep the higher leaning closer to the potential needs of industry rather than pure academics.  Currently there are 5 IIITs and 15 PPP in India and 4 more expected launched soon under PPP 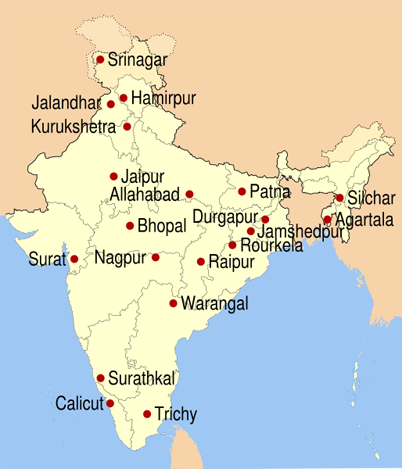 Under level 2, one can group all the National Institution of Technologies (earlier known as Regional Engineering Colleges - REC).  There are 31 NITs all over India - one per state and couple of others are in Union Territories.  NIT offers courses at various levels from bachelors, masters and doctorate.

Admission to IITs, IISc, IIIT and NIT’s is based on JEE (Joint Entrance Examination) conducted by the IIT’s.  The details/ pattern of JEE entrance is given above.  Pattern of JEE

Other than Level 1 and Level 2 institutes, there are many autonomous or affiliated institutes of high repute which offer course in Engineering at the level of bachelor’s, master’s and doctoral levels.  To get into these institutions one has to clear the common entrance test of that particular state or entrance exam conducted by the institute itself.  It is out of bounds to cover all such institutes, however an attempt has been made to cover some of them as below:

Birla Institute of Technology and Science (BITS), Pilani.  The institute was established in the year 1964. It is a deemed university under section 3 of UGC act 1956. It offers higher education. Since 2005, admission to BITS is done on the basis of the percentage a student scores in All India Entrance exam conducted by BITs admission test.

The test is conducted online in the month of May and June all over India. Application needs to be submitted in the month of December. The pattern of exam is basically on reasoning and analytical abilities in English, physics, chemistry, mathematics, and logical reasoning. The eligibility for the exam is minimum 75% in 12th or PUC. The courses offered in master’s degree are in engineering, pharmacy, public health and business administration. The campus is located in Pilani (Rajasthan), Goa, Hyderabad in India and in Dubai outside India.

All engineering colleges which are under the control of Anna University admit students based on their marks in 12th standard board examination or PUC done from the state board in the subjects of Maths, Physics and Chemistry. There is NO separate entrance test in Tamil Nadu for admission to engineering colleges. After the result of 12th or PUC one can fill the online or offline form and submit it to the TNEA. Based on the merit, the TNEA announces the list of the selected candidates. Selected candidates are informed well in advance about the place of counselling.

Vishvesvarya Institute of Technology, Mysore:  Also commonly referred as MVIT was founded in the year 1986.  It is named after Sri M Vishvesvarya, a well known engineer and former diwan of Mysore. To seek admission to this institute one has to clear the 12th or PUC from the state board with good percent.

The state of Karnataka conducts Common entrance test (CET) for Karnataka domicile students. Another exam under management quota which is conducted by state government is Comed-K for Karnataka and non Karnataka students. The fee structure for both the exams is different. The exams are usually conducted in the month of May or June.

VIT has campuses in Vellore and Chennai. VIT conducts its own entrance exam online and offline called as VITEEE. Based on the percentage and cut-off rankings students get admission in different streams that are provided in this university. 12th or PUC passed with minimum 60% are eligible to write the exam.

Admission to postgraduate is done based on the percent obtained in GATE or CAT for MBA. Admissions to other courses like MSc, Mtech, and PHd is obtained through the entrance exam conducted by the institution. The primary object of the institution is to provide world class education in the field of petroleum and energy sector. Other than Rae Bareli institute also has a centre in Noida.

Nirma University, Gujarat: Another prestigious university started in the year 1995 is the University of Nirma. Mr Karsanbhai K Patel who is the founder of Nirma Group founded the Nirma University to provide quality education in all the fields. The institute of technology offers courses in graduate, postgraduate and at PhD level. The institute is located in Ahmadabad Gujarat.

A candidate must have cleared the 12th with PCM as main subjects.  Also candidate must have appeared for JEE exam. The admission takes place in 3 stages  50% 0f the seats are filled by admission committee for professional courses( ACPC) category based on the JEE exam. Candidates has to apply for ACPC separately.  35% is filled by Nirma University for candidates who have completed 12th and written JEE exam and the remaining 15% are filled by NRI and NRI sponsored candidates