India is a land with many hill stations. Hill stations are the land of high altitude with pleasant  and cold climate throughout the year unlike plains. Thus Hill stations become an excellent place to relax from the stressful life and also from high temperatures especially during summer season. The fresh air and greenery all around relishes our mind and body.

India has seven mountain ranges and the largest is the Himalayas. Here is a list of some of the picturesque and pristine hill stations which is a perfect place to relax and to make a memorable vacation. 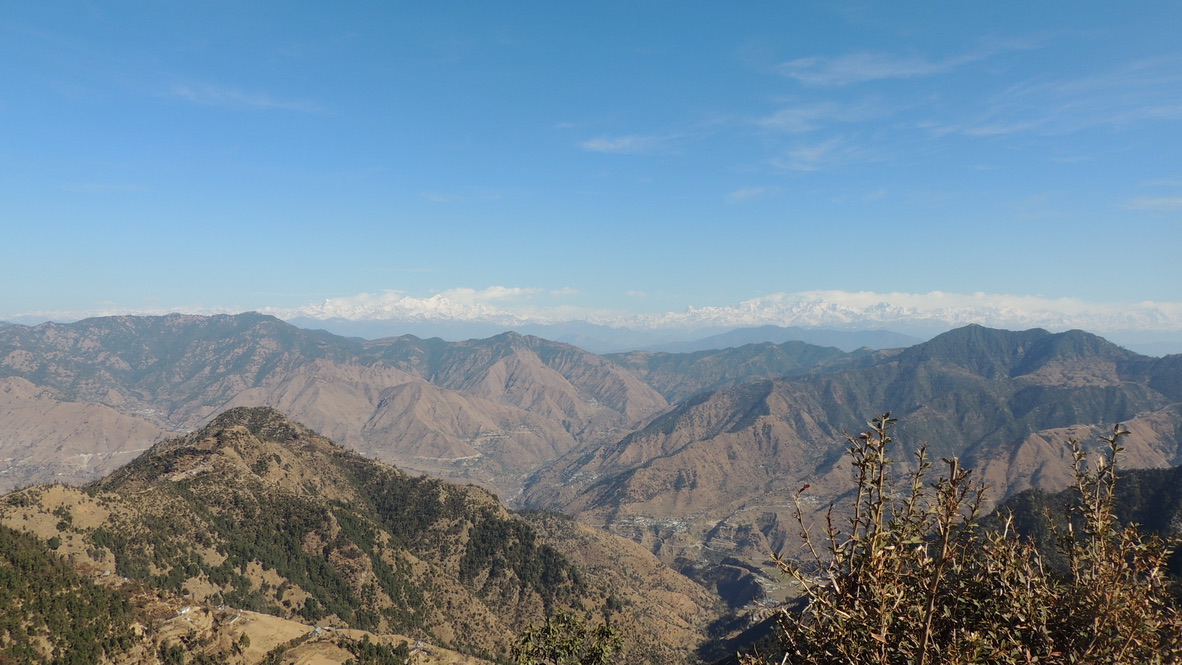 Mount Abu is the beautiful serene hill station in the Aravali Range in Sirohi District Rajasthan, India. It can be visited throughout the year and is one of the most important and beautiful Hill stations in India.

It is located at an elevation of 1220 meters above sea level. Guru Shikhar  is the highest peak in the Aravali Range at 1722 m above sea level.  The mountains form a rocky plateau 22 kms long by 9 km wide. 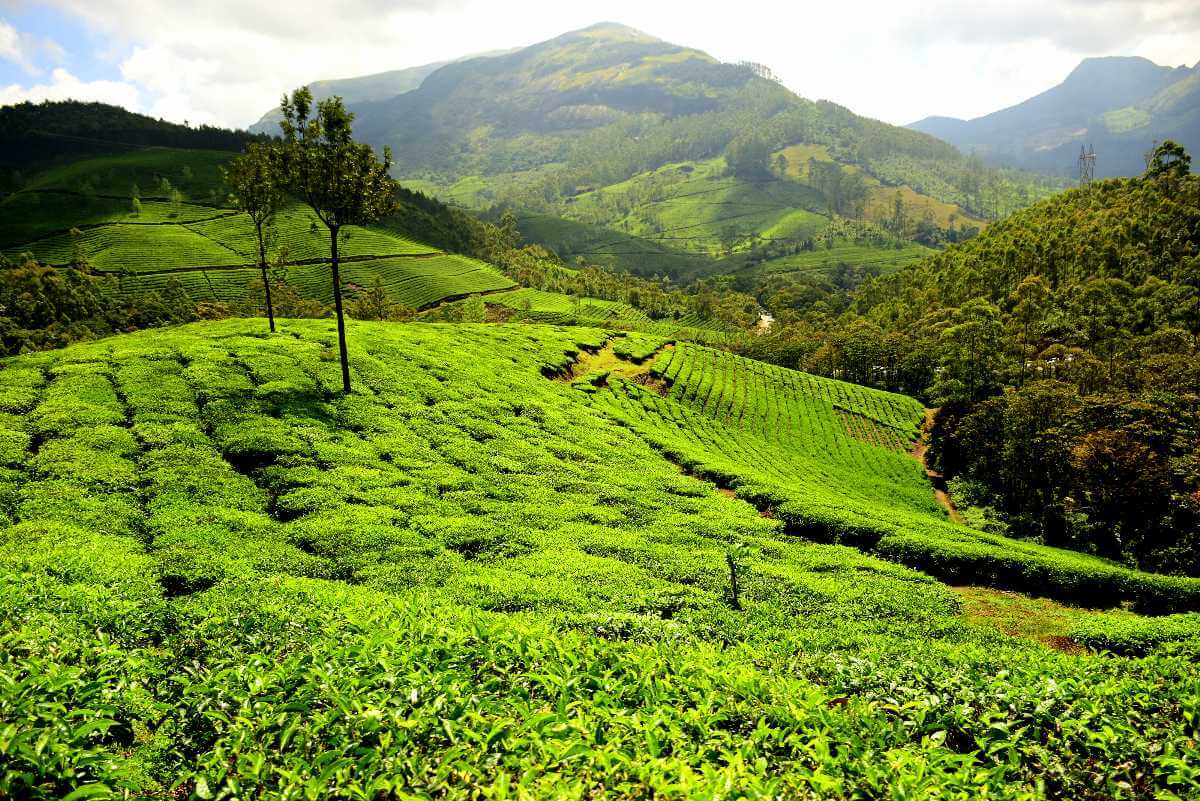 Munnar is one of the famous and beautiful Hill stations located in Idukki district in  the state of Kerala, India. It is at an elevation of around 1,532 m. Munnar is located in the Western Ghats mountain range and hence is filled with beautiful flora and fauna all around. Munnar is so beautiful that it is called Kashmir of South India.

During British rule in India they had made Munnar as their summer resort. The region is in the confluence of three rivers namely Mattupetti, Nallathanni and Kundaly flown through the town and gets joined at some distance after Munnar. It is pronounced as Moon aar or moonu aar which means three rivers.

Munnar is easily accessible and has many places to visit.

Ooty also known as Udhagamandalam is located in the Nilgiris District of Tamil Nadu, India. Popularly known as Queen of Hill stations and Western Ghats, Ooty is one of the most important tourist places in Tamil Nadu. It was the summer capital for Madras Presidency during British rule in India.

Kodaikanal is a prominent hill station located in Tamil Nadu, India. It is in the Dindigul district of Tamil Nadu.  In Tamil Kodaikanal means, “ The Gift of Forest.”   Kodaikanal is an amalgamation of two words- Kodai and Kanal. Standing at an elevation of 2,133 m

Kodaikanal  is known as the “ Princess of the Hill Station.” Kodaikanal has many local names. Recently the tourists and the locals have called Kodaikanal as “ Switzerland of the East” and “Summer heaven.”  The place is known for its rich flora. Kodaikanal is at the tip of the Palani Hills which is covered with thick forests. 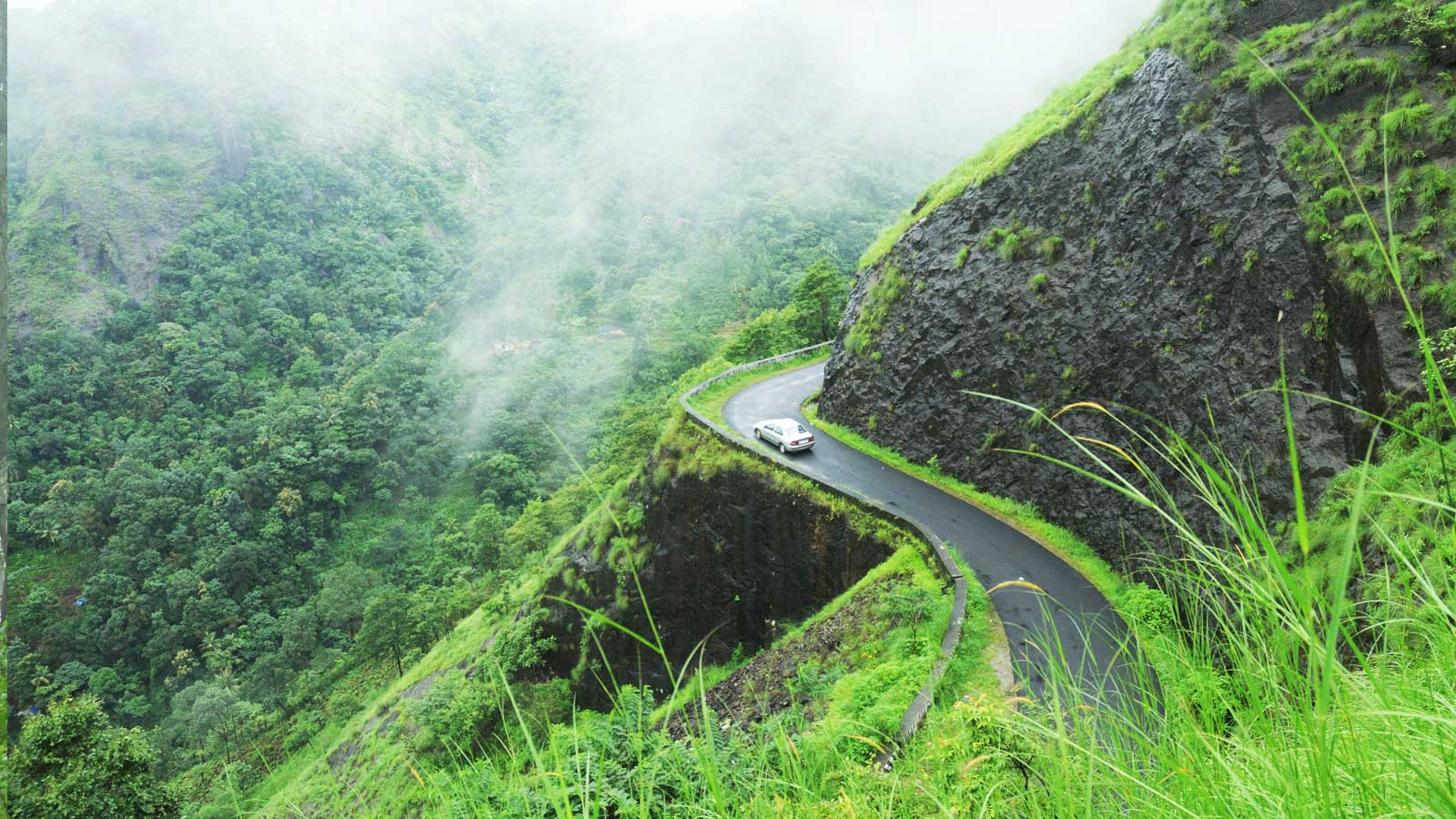 Vagamon or Wagamon is a hill station located in the Idukki district of Kerala, India. It is in the Idukki- Kottayam border with an elevation of 1,200 m.

The place enjoys pleasant climate throughout the year and is now considered as the major tourist place in Kerala. Vagamon does not have much history as it was not explored until 1926. Walter Duncan and Company started tea plantations here and by the 1930's more tea plantations were started.

Ponmudi is a calm and beautiful hill station located in  Trivandrum District of Kerala, India. It is known as Kashmir of Kerala with fresh air and lush flora all around.

Peermade, also known as Peerumedu, is one of the important hill stations in Kerala, India. The fragrance of spices welcomes the tourists from different parts of the world.  It is at a height of 950m above sea level in the Western Ghats.

Peermade is towards the east of Kottayam on the way to Thekkady. It is a wonderful experience to feel the slopes of the hills covered with tea, coffee, rubber and cardamom plantations under blue sky and greenery all around. Periyar Wildlife Sanctuary is around 30 Kms from the place. 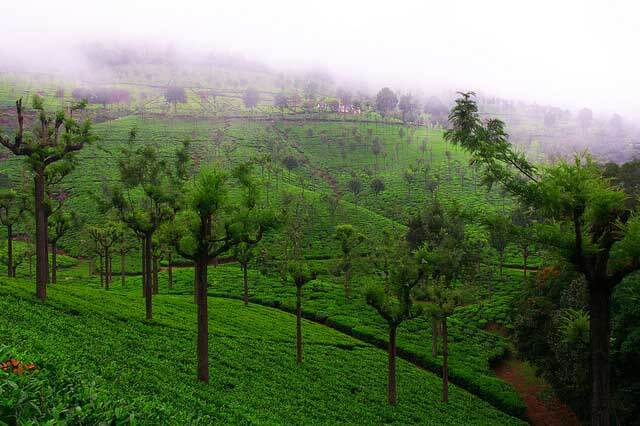 Coonoor is a popular hill station located in the Nilgiris District of Tamil Nadu, India.  It is at an elevation of 1,850 m above sea level and just around 20 kms from Ooty.  It is probably  the second most popular hill station in Nilgiris. Coonoor is famous for tea gardens and tea factories. The British made Coonoor as the summer retreat in the 19th century as it is very closely located to Ooty.

Coonoor  gives a beautiful panoramic view of the lush green Nilgiris hills, waterfalls, valleys along with chirping of different birds from the hills. Coonoor and the Nilgiri Hills have been the home for Toda tribes for centuries.

Muktheshwar is a village which sits high on the Kumaon Hills in Nainital district of Uttarakhand, India. It is at an elevation of 2,171 m which makes it one of the most beautiful villages in Uttarakhand.  The beauty of the place is that one can get a magnificent view of the Himalayas including the second highest peak of India, Nanda Devi. The place is rich in flora and fauna.

The village got its name from the sacred Hindu temple called as Mukteshwar Dham located at the highest point in the village which is dedicated to Lord Shiva.

Mukteshwar has many tourists in and around the hill station. 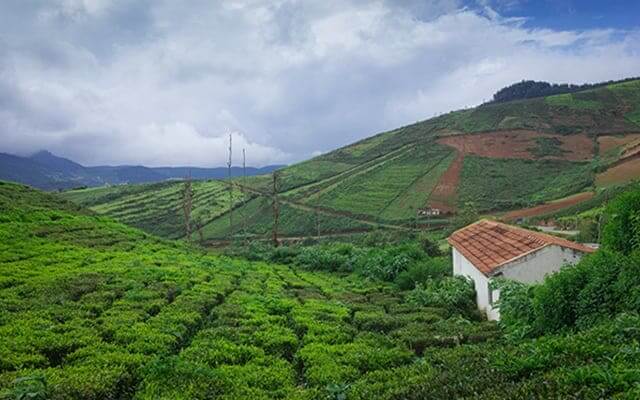 Karnataka is a land that is blessed with everything. It has forts, Hill stations, wild life sanctuaries, historical places, Palaces, temples and pilgrimage places. Being the eighth largest state of India, Karnataka offers everyone something to cherish and enjoy. The climate also differs from North Karnataka to South Karnataka and East to West Karnataka.

Nainital is  a popular hill station in North India situated in Kumaon region of Himalayas and is located in the state of Uttarakhand India. Nainital is at a height of 2,084m above sea level and is one of the important tourist destinations in India. It is also called the lake district of India.

It can be said that Nainital is a paradise for nature lovers. The hills surrounding the lake give a mesmerizing view to the visitors. Nainital is separated into two parts by the lake. The southern side is called Tallital and the northern part is called Mallital. 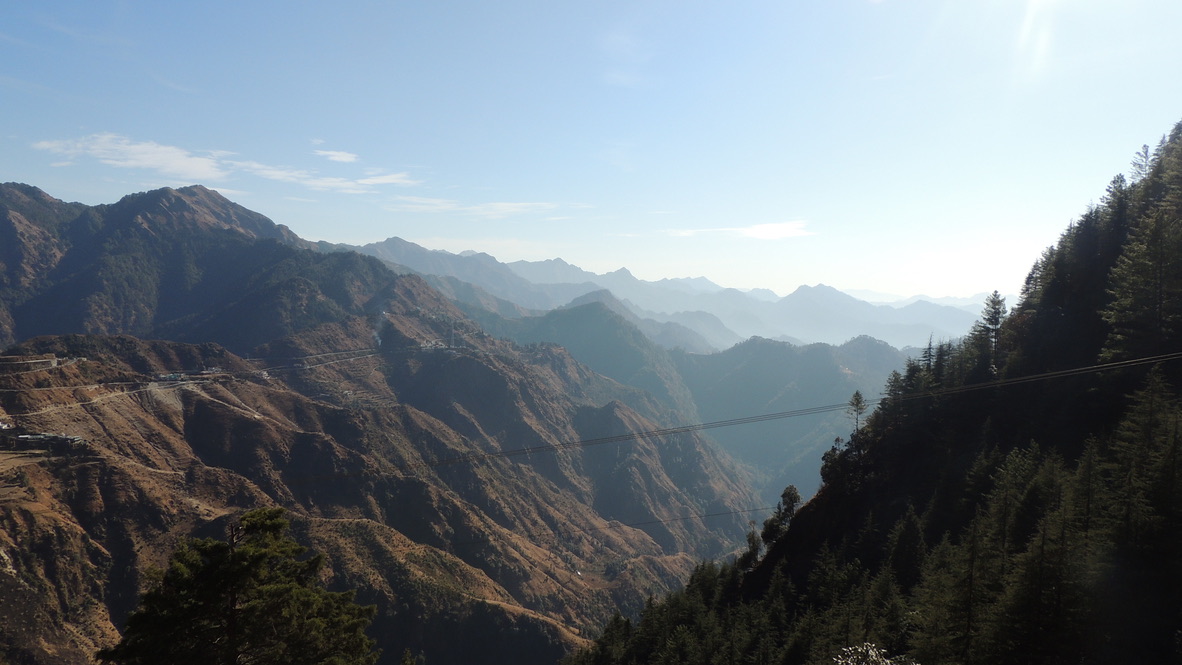 Mussoorie is a very important hill station in Uttarakhand, India. It is about 35 kms from Dehradun and 290 kms from New Delhi. Many people staying in North India rush to hill stations to get away from the scorching heat.

Popularly known as the “ Queen of the Hills,” Mussoorie is at an elevation of 2005 m above sea level. To the northeast of Mussoorie is the beautiful Himalayan ranges and towards south is the Doon Valley and Shiwalik ranges.

Mussoorie also serves as a gateway to Hindu pilgrimage places like Gangotri and Yamunotri. Another major highlight is that Mussoorie has a ropeway to Gun Hill, which is the second highest point of Mussoorie after Lal Tibba.

Chail is a popular hill station located in Himachal Pradesh, India. It is at an altitude of 2,250 m and gives a beautiful view of the lower Himalayas. Chail is surrounded by the forests of chir pine and gigantic deodars. The weather remains pleasant even during summer and cold in winter. Some of the important tourist attractions here are the military school, Chail Sanctuary, Kali ka Tibba, Sadhupul and many more. 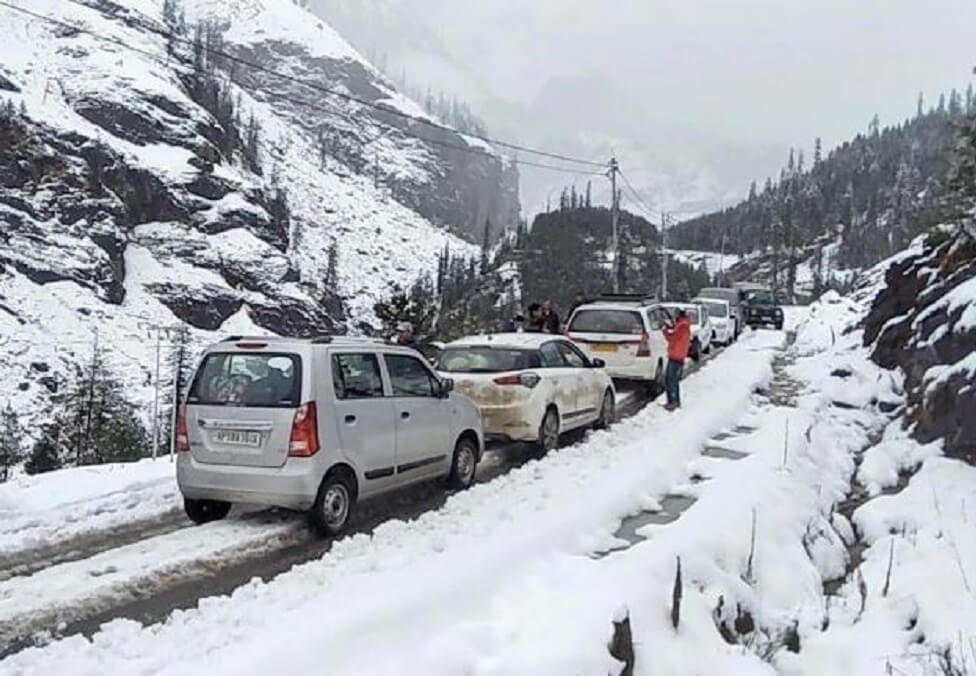 Manali is one of the most popular hill stations in Himachal Pradesh, India. Sitting at an altitude of 2,050 m, Manali is situated towards the northern end of Kullu Valley formed by the Beas River. Some of the important tourist places here are Hidimba temple, Rohtang Pass, Solang Valley, Tibeatean Monasteries, Manali Wildlife Sanctuaries, Nehru Kund, Bhrigu lake and many more. Manali- Rohtang Pass remains closed during winters.

Manali has everything to offer for the visitors with breathtaking views of the snow laden mountains to the beautiful valleys. One can also indulge in some adventurous activities like river rafting, paragliding, trekking and skiing in Solang Valley.

It is one of the most popular hill stations and the capital city of Himachal Pradesh in India. It was also the summer capital during British rule in India. Shimla is easily accessible by rail, air and road. Tourists can even drive down from Delhi. Shimla has many tourist attractions and the major being the Kalka- Shimla Railway line built during the British rule. It is the UNESCO World Heritage Site. This railway route has around 806 bridges and 103 tunnels.

Darjeeling is a beautiful hill station in West Bengal, India. It is famous for tea production and is still hugely exported worldwide. It is at an altitude of 2,045 m and is famous for its tea industry and the beautiful scenic view of Kanchenjunga. Tourists can also visit the Botanical garden, Rock garden, Dhirdham temple, Himalayan zoo and many more.

Dalhousie is a hill station in the Chamba district of Himachal Pradesh. It is at an elevation of 1,970 m and has a humid subtropical climate. The place is named after Lord Dalhousie who was a governor general of India during British rule. He established this place as a summer retreat. Some of the important places to visit here are Bakrota Hills, Gandhi Chowk, Kalatop, Panchpula, Subhash Baoli and many more.

Auli is the Chamoli District of Uttarakhand. It is at an elevation of 2,800 m above sea level. The place is famous for Skiing and other winter sports competitions. Due to climatic conditions coniferous trees are more common in Hill stations. Auli is surrounded by both coniferous and Oak forests.  One can get  to see a panoramic view of the Himalayas from here.  The nearest airport is the Jolly Grant Airport at Dehradun. 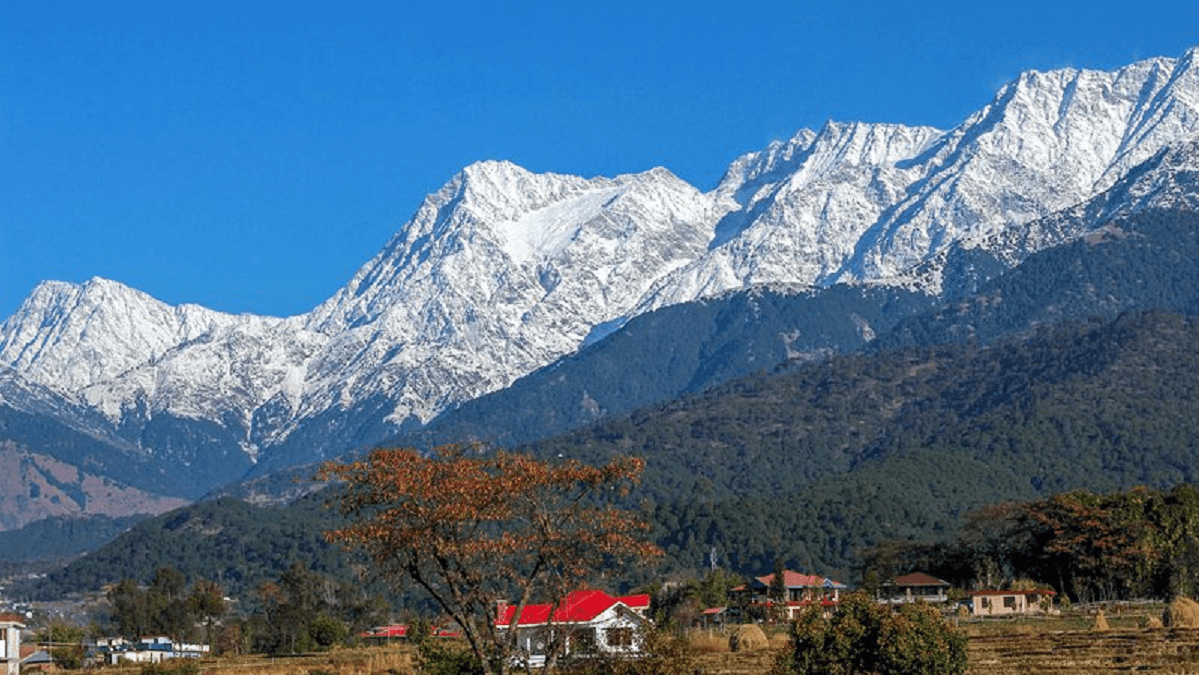 Palampur is a beautiful quiet hill station located in Himachal Pradesh India. It is also called the Tea Capital of Northwestern India. Situated in Kangra District, Palampur is surrounded by pine forest and bounded by Dhauladhar ranges. The hill station is a visual treat with  gushing streams,  Dhauladhar ranges and greenery all around . It  has many touristic places like Dharamshala, Saurabh Van Vihar, Baijnath Shiva temple, Palampur tea gardens, Gopalpur zoo and many more.

It is a beautiful hill station in Himachal Pradesh, India. This colonial era hill station is a hiker’s paradise and natural serene beauty all around the place. Kasauli has many tourist attractions. Some of them are Gilbert Trail, Baptist Church, Hanuman Mandir, Mahlog state and many more.

Gangtok is a beautiful hill station and capital of Sikkim State in India. It is at an elevation of 1,650 m situated towards the eastern Himalayas range. The place has subtropical highland climate which helps the place to have moderate climate throughout the year.

Gangtok has many places to visit. There are many viewpoints to see the Kanchenjunga ranges. Gangtok and its surrounding places are filled with natural beauty. Some must visit places include Lake Tsomgo, Echey Monastery, Rumtek Monastery,  Reshi Hot Springs, Nathula Pass and Himalayan zoological park.

Kasol is a small village in the Kullu district of Himachal Pradesh India. It is at an elevation of 1,580 m and is situated on the banks of Parvati River. Kasol is rapidly gaining popularity  for trekkers, backpackers and nature lovers. Some of the important places to visit in Kasol are Malana,  Parvati River, Chalal, Tosh, Parvati pass trek and many more.

Hill stations are one of the best places to visit and relax and rejuvenate ourselves . There are still many more hill stations other than that in the list.