Thar desert also known as the Great Indian desert is located in the Indian subcontinent. It is a dry arid region which is located to the northwest of Aravali hills. It covers the western Rajasthan and is the natural boundary between India and Pakistan.

It is the 17th largest and 9th largest hot subtropical desert in the world and also heavily populated among all deserts. It is one of the best tourist destinations to experience the Rajasthani culture, tradition and cuisine. Thar Desert is an important geographical feature of India.

The desert has a smooth surface with elevation at some places with high and low sand dunes seen everywhere. These dunes take different shape and size as they keep moving and even can raise to a height of 500 feet. Many dhands also known as saline lake beds are scattered all around the region. 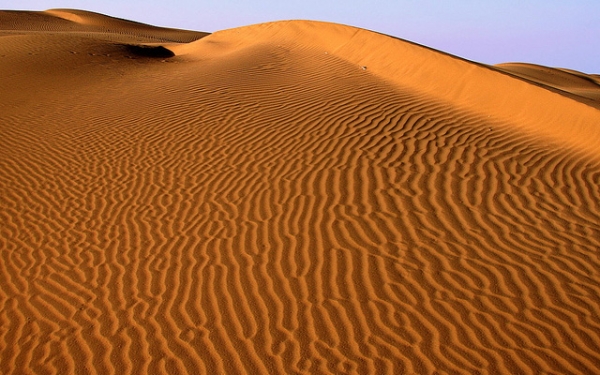 Geography and Water of the Thar Desert

Covering an area of 77,000 square miles the thar desert is bordered by Indus River to the west, Aravalli Hills to the northeast, Great Rann of Kutch towards the south and Punjab Plain towards the North.

For most part of the year the soil of the desert remains dry due to lack of rainfall.  The desert on the whole comprises a very dry region, marusthali region in the west.  The Luni River is the largest river in the thar desert. It originates in the Pushkar Valley of the Aravalli Range passes through the southwest of the Thar Desert and reaches the land of Rann of Kutch in Gujarat.

There are three main types of that are desert soil, red desertic soil and brownish grey soil. Also, one can see soft loose soils in the hills. The soil is usually coarse and very fine powder like. the soil is generally not fertile due to severe soil erosion.

The Thar Desert has few lakes which get dried up during the summer season. Since water is scarce resource in Thar Desert. It is very important to store the water in tanks and reservoirs for drinking and domestic purposes.

The groundwater being salty cannot be utilized for any purposes. The Indira Gandhi Canal which is the largest canal which carries water from Beas and Sutlej River provides water for the irrigation purpose in the thar desert.

Crops like mustard seeds, cotton, wheat are now grown in the semi-arid region of Rajasthan. Besides providing water for irrigation it provides drinking water to thousands of people in remote areas.

Land and soil of Thar Desert

The soil of the Thar desert remains dry for most part of the year due to repeated wind erosion in the desert. The Desert has high and low sand dunes which are separated by sandy plains and low barren hills. High velocity winds blow and shift the sand dunes in the desert. Sand dunes are usually formed by the movement of sand by the wind. The sand dunes are in different size and shape and are  continuous.

We can say that the Thar Desert is one of the important to maintain the ecosystem of India due to lack of rainfall, high temperatures, high wind speed and moving of sand due to wind. The desert has small stretches of alluvial soil with very less vegetation. One can see both red and yellow soil at the foothills. The soil is usually very infertile due to repeated soil erosion

Tecomella undulata is a very important desert tree to protect the ecosystem in the desert. It is an important source of timber. It helps in soil binding with the help of its lateral roots. It also helps as wind breaks thus stabilising the sand dunes. Above all it give good shade to animals and birds in the desert.

Thar Desert is the most populous desert areas in the world. the main occupation of people living in desert is the agriculture and animal husbandry. Bajra is the main Kharif crop which is usually grown in summer season and sown in June and July. then get harvested by September. Some of the main agriculture includes Bajra, jowar, seasame, groundnuts and maize.

Due to the harsh climatic conditions the thar desert has a different kind of plants and animals. The plants in the desert don't need much water to survive as they have thick stems and thorns on it. These plants are known as cactus plants. The desert also has regular trees like shrubs, trees and herb species.

Other than the camels, some other animals that are found in the Thar desert are reptiles, lizards, Chinkara, Indian wild ass and black bucks. There are around 150 migratory birds and resident birds in the desert. If tourists are lucky one can see birds like eagle, falcons, vultures and many other birds. 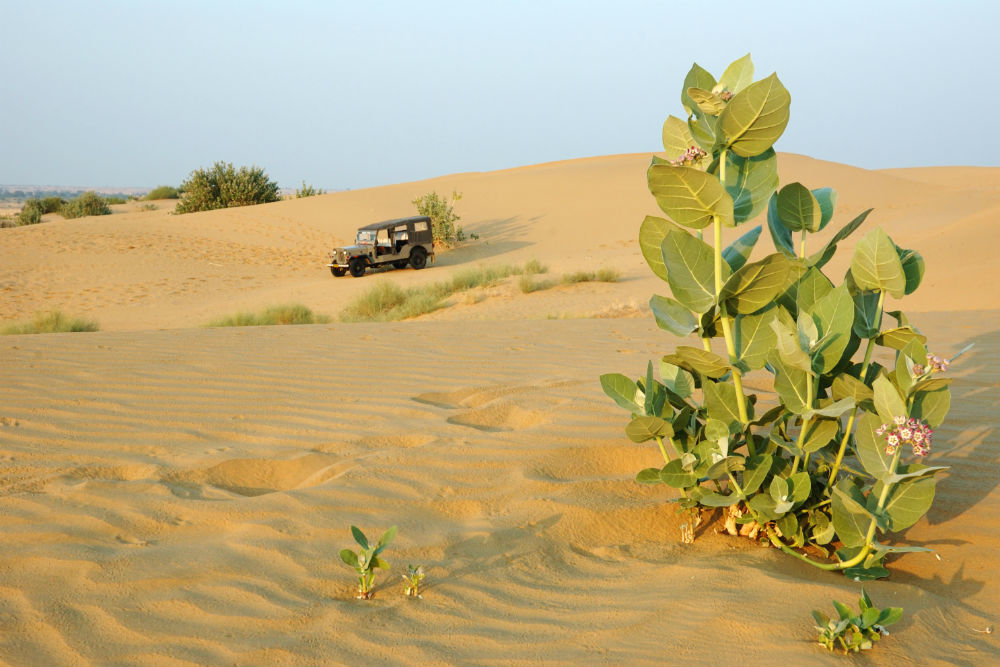 The Climate in the Thar desert is very extreme during summer and winter seasons. Hot in the day and cool at night.

From the heat there are many dried up rivers. Sometimes it doesn't rain for years, and they have droughts. The Thar Desert gets most of its rain in December and January. This desert has no rain in June, July and August. The hottest months are June and July.

The best time to visit thar desert is from October to February.

Jaisalmer is famous for the sand dunes and the fort which is the second oldest fort in Rajasthan built in 1156 AD. The desert festival of Jaisalmer is the most important cultural and colorful event of Rajasthan. It is held in the month of February every year. The main attraction of the festival is the camel race, folk dance, music and most important is the Rajasthani cuisine. Jaisalmer is well connected by rail,road and air.

Another important city is the Bikaner. Some of the important tourist places are Junagarh Fort, Lakshmi Nivas Palace, Laxmikanth temple and the international Camel Festival held in the month of January every year. One should experience the beautiful sunset, the sand dunes and the Rajasthani cuisine. Known as Gateway to Thar, Jodhpur is another important place in Rajasthan to visit and enjoy the palaces and forts. One must enjoy the Camel and Jeep safari on the dunes.

It is home to some of the most exotic animals and birds like the Great Indian Bustard, desert fox, Bengal fox, Chinkara, Falcons, Short toed eagles, migratory birds. With a fragile ecosystem and rough sand dunes, rocks and compact salt lakes bottom, the Desert National Park is a must visit place in the thar desert. The best time to visit is November to January. The endangered Indian bustard is the major attraction in the park.

Most of the people of thar desert live in rural areas. They belong to different religions like Hindus, Muslims, Buddhism and Jainism. The main occupation of people living in rural areas is agriculture and animal husbandry.

With the cool breeze in the evening from the desert the local residents enjoy the evening with folk music and dance. Some of the nomads are also engaged in crafts, trade and business. Most of the local people speak Rajasthani languages like Marwari. Jodhpur, Jaisalmer and Bikaner are the important places of the thar desert.