Here is the quick links within the page

Western Ghats of India is the longest mountain range that runs parallel to the western coast of India.  It is one of the most important geographical features of India. The Ghats covers the state of Kerala, Karnataka, Tamil Nadu, Goa, Maharashtra and Gujarat. The mountains of Western Ghats are considered as older than Himalayas and the geologists believe that the Western Ghats were formed during the break up of Gondwana.

It covers a range of 1600 Km starting from Songodh town in Gujarat and ending at Marunthavazh Malai near Kanyakumari. Western Ghats is a world Heritage UNESCO site and is one of the hottest biodiversity spots in the world.

The Western Ghats is famous for its beautiful landscapes, hill stations, National parks, wildlife sanctuaries and flora and fauna. There are a lot of rare species of birds present in the Western Ghats. Some of the flora and fauna are present only in India and not in any place in the world.

The northern part of the western Ghats is drier as compared to the southern part. The transformation from northern to southern ecological regions of the Western Ghats starts from the evergreen forests in Waynand. The mountain range separates the Deccan Plateau from the narrow coastal plain of Konkan.

Western Ghats is also known as Sahyadri in Maharashtra, Nilgiri Malai in Tamil Nadu and Sahian in Kerala.  The mountains act as a barrier for the rain bearing westerly monsoon. Hence receives high rainfall during the monsoon season.

The dense forest also helps in bringing rain in the Western Ghats. Some of the important rocks that are found in Western Ghats are Basalt, Khondalities, metamorphic gnessis, limestone, bauxite, charnockites and many more.

The Western and Eastern Ghats meet at Nilgiri mountains of Tamil Nadu. Anamudi is the highest peak in the Western Ghats and Ooty is known as Queen of Western Ghats because of the natural beauty in the Hill station

The western ghats receive heavy rainfall and some of the rivers that originate in Western Ghats are  Krishna,Godavari, Tungabahdra and Kaveri. These rivers flow to the east and drain into the Bay of Bengal.

Some of the tributaries are Bhima, Malaprabha, Ghataprabha, Hemavati and Kabini. The rivers like the  Periyar, Pambha, Netravati, Sharavathi and Mandovi flow towards the west and drain into the Arabian sea. These rivers are fast moving due to the short distance and steep gradient. Major dams have been built across the rivers for the production of hydroelectricity and for irrigation purposes.

Some of the major dams include Lingamakki , Krishnarajasagar dam, Mettur and Pykara dam. Linganamakki dam is built across Sharavathi river in Kargal village of Karnataka. This dam is very close to Jog falls.

Flora and Fauna in Western Ghats

The Western Ghats is famous for its flora and fauna. The flora and fauna are breathtaking to see. It is considered as the world's eight hottest biodiversity hotspots.

The Western Ghats also has around 390 threatened species that are vulnerable for endangerment. There are no words to express the floral beauty of Western Ghats. It is home to 7400 varieties of flowering plants.

Other than the flora and fauna Western Ghats has many famous hills stations and waterfalls some of the famous places one must plan to visit are --- Lonavala, Panchagani, Mahabhaleshwar, Coorg, kudremukh, Munnar, Coonor, Ooty, Kodaikanal, Idduki, Biligirirangan hills.

Anamudi is the highest peak in Western Ghats.  Phalghat near the south of Nilgiri Hills is the low mountain pass in the Western Ghats. The Jog falls is a world famous waterfall in Western Ghats. During monsoon season it is a major tourist attraction. Many dams have been built across the rivers for hydroelectric purpose and irrigation.

Some of the major rivers that originate in Western Ghats include Kaveri, Godavari, Krishna and Tungabhadra. These rivers are the lifeline for the people living along the Western Ghats.

The rivers are mainly dependent on the monsoon every year. Some of the important and famous waterfalls include- Jog, Shivanasamudra,Hogenikkal, Athirappilly waterfall and Talakaveri is the source of River Kaveri and Kudremukh range is source of Tungabhadra.

Due to the availability of plenty of fresh water, Western Ghats is also famous for many man made lakes like Pookode lake, Vagamon lake,Berijam lake in Palani Hills and many more.

The average mean temperature ranges from 20 degree C in the south and 24 degree C in the North. Winters are pretty cold. Monsoon season is from June to September. During this period the places in Western Ghats receive heavy rainfall.

Due to this contrast there is also huge difference in the vegetation. The vegetation found in the high hills is different from the vegetation grown in the lower hills. The northern range is drier as compared to the southern region of the western

The North Western Ghats moist deciduous forest extends from Gujarat to Karnataka covering Maharashtra and  Goa. The Wayanad forest at the Southern end of the eco region is the transition zone from the north and the southern region of the Western Ghats. 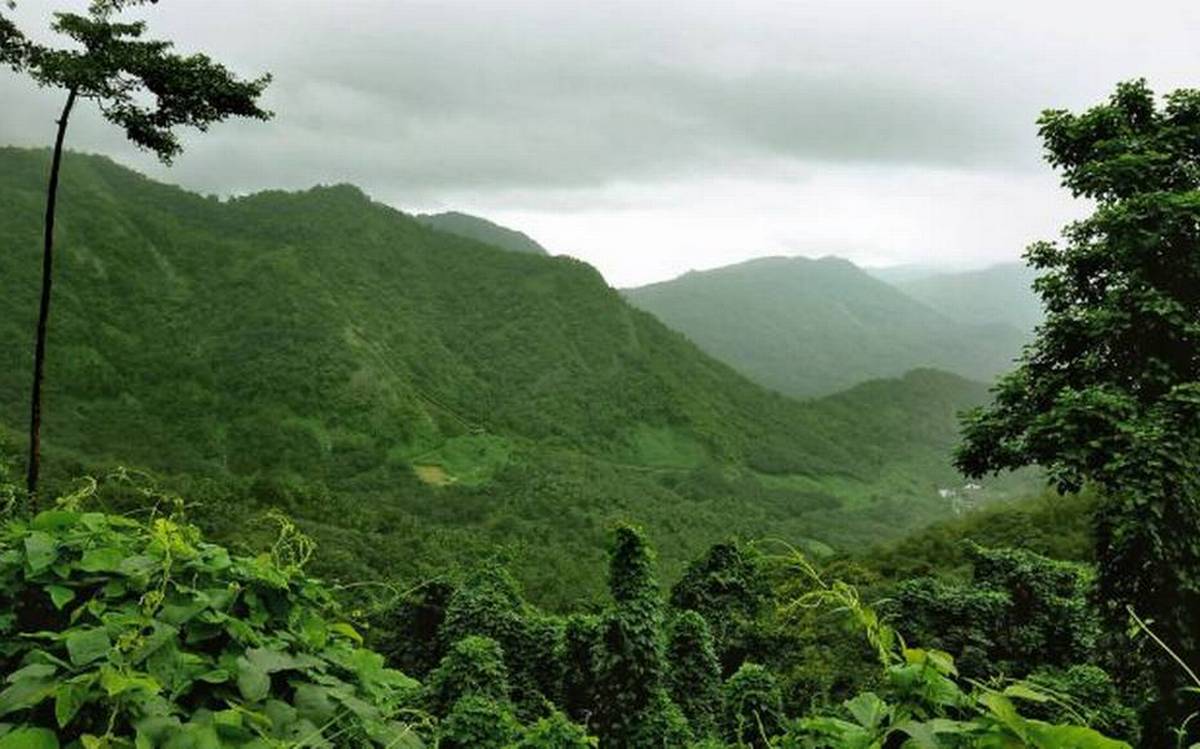 The North Western Ghats Montane forests are mostly evergreen and have trees like Cinnamon, Litsea, Phoebe. The South Western Ghats moist deciduous forest is a tropical moist broad leaf forest which covers the southern region of the Western Ghats and the Nilgiri Hills.

Some of the important ranges include Anamalai, Agsthyamalai, Nilgiri Hills and Palani Hills. This forest has some of the beautiful flora and fauna like tiger, Asian Elephant, Nilgiri Langur, Malabar grey hornbill, Indian giant squirrel and many more.

The South Western Ghats Montane are cooler and wetter as compared to South Western moist deciduous forest. This supports a great variety of species like the Vernonia, Calophyllum, Litsea, Mesua Ferrea and many more. Around 80% of the flowering plants are found in this region. This region supports a large family of elephants, Panter, Sloth bear and many more.

There is a clear difference in the vegetation grown in the northern and southern part of Western Ghats. The western slopes are green throughout the year and some of the important trees found are Rosewood, Mahagony, Cedar etc and the eastern part of the slope predominantly have dry and moist weather and the trees found here are Teak, Sal, Shisham etc. However the Western Ghats is severely getting affected by human interference. 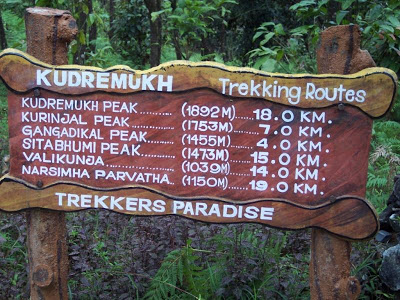 Read more about the National Parks in India

Western Ghats is a very important tourist destination in India. One can think of travelling to Hill stations like Ooty, Kodaikanal, Munnar, Coorg, Kudremukh, Lonavala, Mahabaleshwar or adventure tourism.

There are around 13 national parks including 3 biosphere reserves and many wildlife sanctuaries in Western Ghats. To protect the nature and wildlife in Western Ghats it has been declared as an ecologically sensitive area and ecological hot spot in 1988. 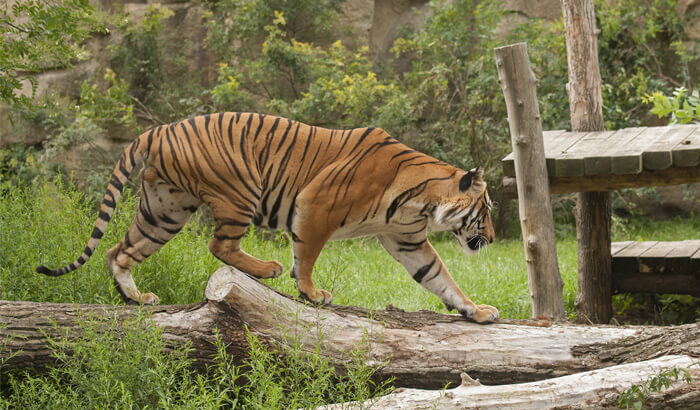 Tourists can also plan to do some trekking in Western Ghats. Some of the popular trek routes include Kodachadri trek, Chembra trek,Trekking in kudremukh, Ratangad fort trek, Meesapulimala, Idukki, Bhimashankar, Maharashtra,, Kunti Betta Mysore, Mullayanagiri Chikmagalur and many more.

Here are some of the details of these trek routes:

Base for the trek is Sarpadhari. The entire trek is around 5 Km which should roughly take around 4 hours. It is relatively steep and the trekkers are advised to carry food and water bottles along with warm clothing. 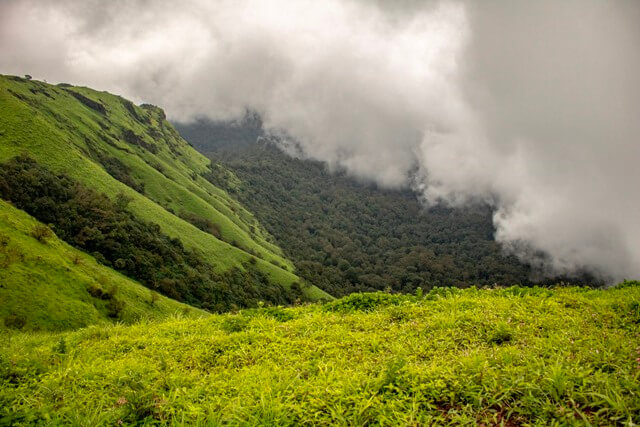 Kodachadri is the mountain peak located in Shimoga district of Karnataka. It is the 10th highest peak in Karnataka with an elevation of 1,300 ft. The trek is situated in the heart of Mookambika Wildlife sanctuary.

The sunrise and sunset point is a famous place in the trek. There are few homestays available at the Nagodi village which is at the base of the mountain. The full trek route is around 15 Kms. One can mix both jeep rides and do a trek to reach the peak.

The Hidlumane waterfall, lush green forest, water streams, temple of Mookambika and a wide range of flora and fauna makes Kodachadri trek a perfect place to do trekking. There are two trekking routes to kodachadri peak. One is from Kattinahole through Hidlumane waterfalls and another is through Santhosh Hotel Valur. The third trail can be a jeep route which is the longest as compared to the other two.

Meesapulimala is the second highest peak in the Idukki district of Western Ghats. Trek is usually organised through Kerala forest  development Corporation in  Munnar. The seats are limited and the trekking path from Kolukkumalai to Meesapulimala is highly restricted.

It is an 8 Km trek and roughly takes around 8 hrs to complete the trek. This mountain is between Anamalai Hills and the Palani Hills. One can enjoy the beautiful grasslands, rainforest, and watching some of the wild animals like Sambar Deer, Sloth Bear,Nilgiri Thar and Wild Gaur.

The trek begins at Ratanwadi village in Maharashtra. The altitude is around 4,200 ft and trekking could take close to 5 hours. After reaching Amrutheshwara temple one can see the huge Ratangad fort from the temple.

At the beginning of the trek the trail  is quite flat till we reach the base of the hill. While reaching the tip of the hill one can enjoy the lush green forest and valleys. After reaching the fort spend some quality time to see the fort and start back your trek.

Do share your experience with us by clicking the link here