Hitopadesha is a masterpiece of short stories. It is an Indian text written in Sanskrit language which consists of fables with both animal and human character. It is believed that the test belongs to the 12th century and probably written by Narayana Pandit between 800- 950 CE. Later Hitopadesha is translated into many languages to help the readers to read and understand.

The Hitopadesha is quite similar to Panchatantra tales where both have some good morals to understand. The Hitopadesha is divided into four books with a preface section  known as Prasthavika.  The books are known as 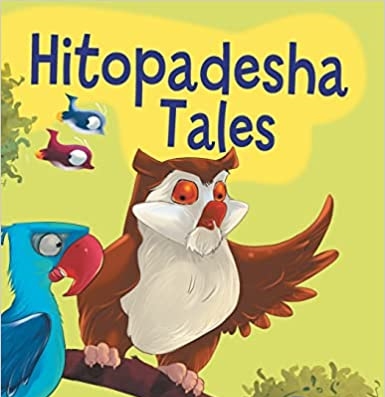 Elephant and the Jackal

Once upon a time there lived an old tiger in a dense forest. The tiger was feeling hungry and as he grew old the tiger was finding it difficult to hunt.

While roaming around the forest in search of food the tiger came across a gold bangle lying on the banks of a lake in the forest.

Once upon a time in a thick forest there lived many birds on a big tree. Next to this tree there was a hollow and dry tree. One day a half blind old vulture came and made the dry tree his home. The vulture had no friends or relatives. He was all alone in the forest and on the tree.

The monkey and the bell:

Once upon a time there was a robber in a small village. He  used to steal at night in the village. All the villagers were worried because of this robber. Everyone wanted to get rid of these robbers.

One day he stole a huge bell from the temple and ran towards the forest. The tiger heard the loud bell sound and was curious to know where the sound came from.

Once upon a time there was a big tree next to a river. The tree had many branches. Many birds had made their nests and were living on the tree with their families. The tree was giving shelter from scorching sun and also during monsoon season.

One day as the sage was closing his eyes and doing meditation. At that time a kite dropped a baby girl mouse in the lap of the sage.

Once upon a time in a thick forest there lived a lion. Some of the animals and birds like crow, jackal and wolf had made the lion as their best friend. All three were very selfish and made a lion as their friend only to protect themselves from getting attacked by any fierce animals.

Jackal and the arrow story

It is a very interesting story from Hitopadesha Tales which teaches us that we should never be greedy and be satisfied with whatever we get. Once upon a time in a small village there lived a hunter along with his family. He was a happy man as he had good support from his family for all the work he did.

Once upon a time there lived a ferocious and cruel lion in the forest. He was very rude and used to kill all the animals in the forest.

All other animals in the forest were very upset with his behaviour. One day  the lion was walking in the forest in search of food. Unknowingly the lion fell into the trap of the hunter and thus the lion was caged. The lion tried his best to free himself from the cage but he could not.