Jaisalmer Fort:  Jailsalmer fort is one of the most important fort in Rajasthan India. The oldest fort built by Raja Jaisal in the year 1156 AD from whom the fort got its name. It is a famous historical monument which is adjudged as the world heritage site by UNESCO. Built in yellow stand stone, the fort stands tall and look marevellous. The fort is also known as Sonar Quila because of the yellow sandstone walls which get faded to honey gold after sun sets. Raja Jaisal chose trikutta hills to built this huge fort as his earlier fort Luderwal was vulnerable to war.

The Jaisalmer fort was under the control of Ala ud din Khiliji for almost 9 years and survived many Mughals attack. The fort is 250 foot tall and is surrounded by 30 feet long walls all around. The basement of the fort is also has 15 ft wall giving double protection. The fort consists of 99 bastions.  The fort is a blend of Mughal and Rajput architecture. The fort consists of four gates namely Hawa Pol, Ganesh Pol, Jawahar Pol, Rang pol. 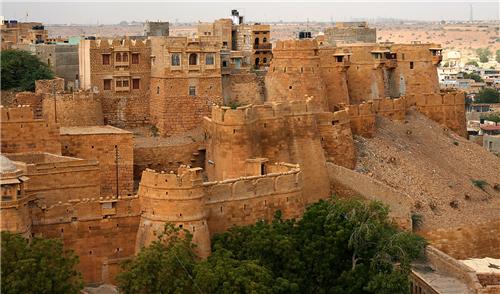 The massive fort was built by Raja Rawal Jaisal around 1156 AD. Standing tall on the Trikuta Hills in sandy expanse of the great thar desert, the Fort has witnessed many battles. The fort is also known as Sonar Qila or olden fort symbolises the dominance of Rajputs.

There are many Haveli’s inside the fort which were built by wealthy persons some hundreds of years ago. These Haveli’s are beautifully carved on yellow sand stone. The fort consists of five stories with balconies, countless rooms, decorated windows, doors. The fort consists of five interconnected palaces with jails or jarokhas. The fort has a very good drainage system called as ghut nali which takes away the rain water away from the fort. But however the recent renovation activities have reduced the effectiveness of the system.

Around 1293-94 AD, faced nine year seige by Ala-ud-din Khiliji. By the end of nine years when the defeat was certain the Bhati Rajput women committed "Jauhar" ( mass self immolation by women) and male warrior laid their lives in the severe battle with the sultan. However Bhatis took over the fort again from the sultans but was not able to do any repair work or maintain it.

The fort was attacked by the Mughal ruler Humayun in 1341 AD. Due to constant attacks from the Mughals and other rulers the king of Jaislamer signed a treaty with Akbar in 1570 and also offered his daughter in marriage to Akbar.

The fort was under the control of Mughals till 1762 later Maharawal Mulraj took control of the fort. he signed a treaty with East India Company in 1818. He died in 1820 after which his grandson Gaj Singh inherited the property. 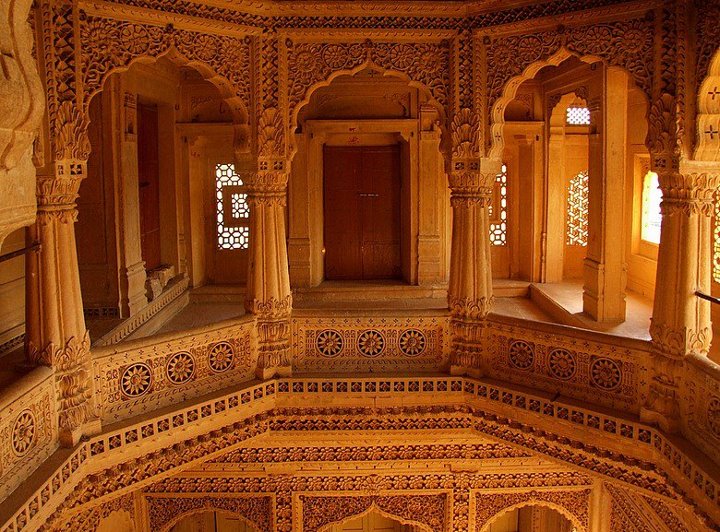 Maharwal palace is the famous structure located in Chauhata Square. The main attraction of this place is the Maharwals throne which is placed on marbles stone. Another important attraction is the Tazia tower which was constructed by a Muslim ruler. Some havelis are converted into museums but however few havelis still having families residing in it. Another important tourist attraction in the fort is the Jawahar pol where the royal families were residing. This place is highy decorated with carved walls, paintings and beautiful construction.

As one moves outside the Jaisalmer fort , one can see lot of eateries, market place called Manek chowk. Some of the must visit place in the fort are Lakshmi temple, the Jain temple, Raj Mahal temple. Due to lot of shops inside the fort it looks very congested and the pathways are very narrow. The narrow lanes inside the fort lead to houses, temples,

The best time to visit the fort is from October to March. The fort is open from 9am-6pm. Jaisalmer is easily accessible through road, rail and air. Summer months are very difficult as temperatures may go up till 45 degree celsius, hence better to avoid summer months. 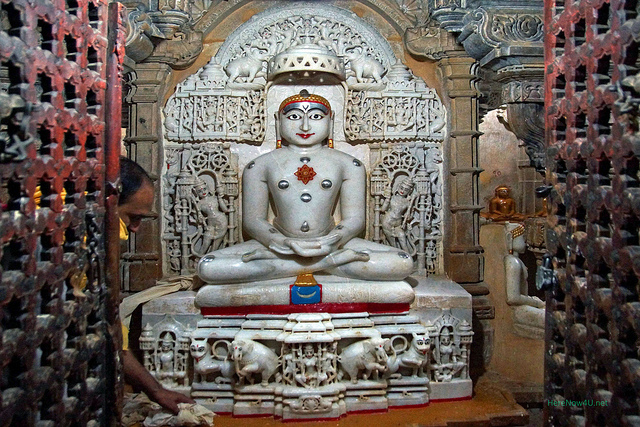 Jain temple: Located inside the Jaisalmer fort, Jain temple is one of the most important tourists visiting place in Jaisalmer. These temples have high archaeological value and dates back to around 12th and 13th centuries. The temple consists idols of various Jain theerthankara’s.

The splendid display of art can be seen in parashvanath temple. Here the walls of the temple have carvings of animals and human figures in Dilwara style. The dome of the temple has beautiful water vase which contains lotus. The opening and closing of the temple keeps changing, so better to check before visiting. Otherwise it is open from early morning till 12 in the noon. 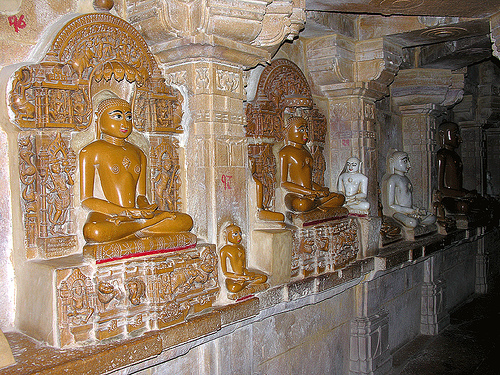 There are in total seven temples inside the fort, the biggest won is the Parshavanath temple and it is the most attractive temple. Other temples are Chandraprabhu temple, Rikhadev temple, Shitalnath temple, Kunthunath temple and Shantinath temple.

These temples are built in yellow sand stone and have marvellous architecture. Chandraprabhu is the first temple which one can visit to the right of this temple is the Rikhadev temple and towards the south is the Shitalnath temple. Behind is the Pashavanath temple. The temple is open on all days. It is a must visit place in Jaisalmer.

Rajasthan is a very warm state due to the thar desert. the best time to visit the fort is from October to March when the weather remains pleasant and cold in winters.

Summers are very difficult to visit as the maximum temperature can go as high as 48 degree celsius and also due to the presence of heat wave.

Jaisalemer is a very important tourists destination in the state of Rajasthan. It is well connected through rail, road and air.

By Air: As Jaisalmer does not have any airport within the city. The nearest airport to Jaislamer is Jodhpur airport which is connected with domestic and international flights from major places and is around 275 kilometers from Jaisalmer.

By Road: Jaisalmer is well connected to the major cities through roadways also. There are many private and state buses or even can take cabs or taxis from the nearby major cities