It was originally composed in the 2nd century BC and is believed to have been written by Vishnu Sharma  and Vishnubhaga along with many other scholars. It has been preserved and published by various authors all through these decades. It can be said as a classical literature in Hindu texts.

Here are some of the most interesting and moral stories. Enjoy reading them and learn the moral of these stories. 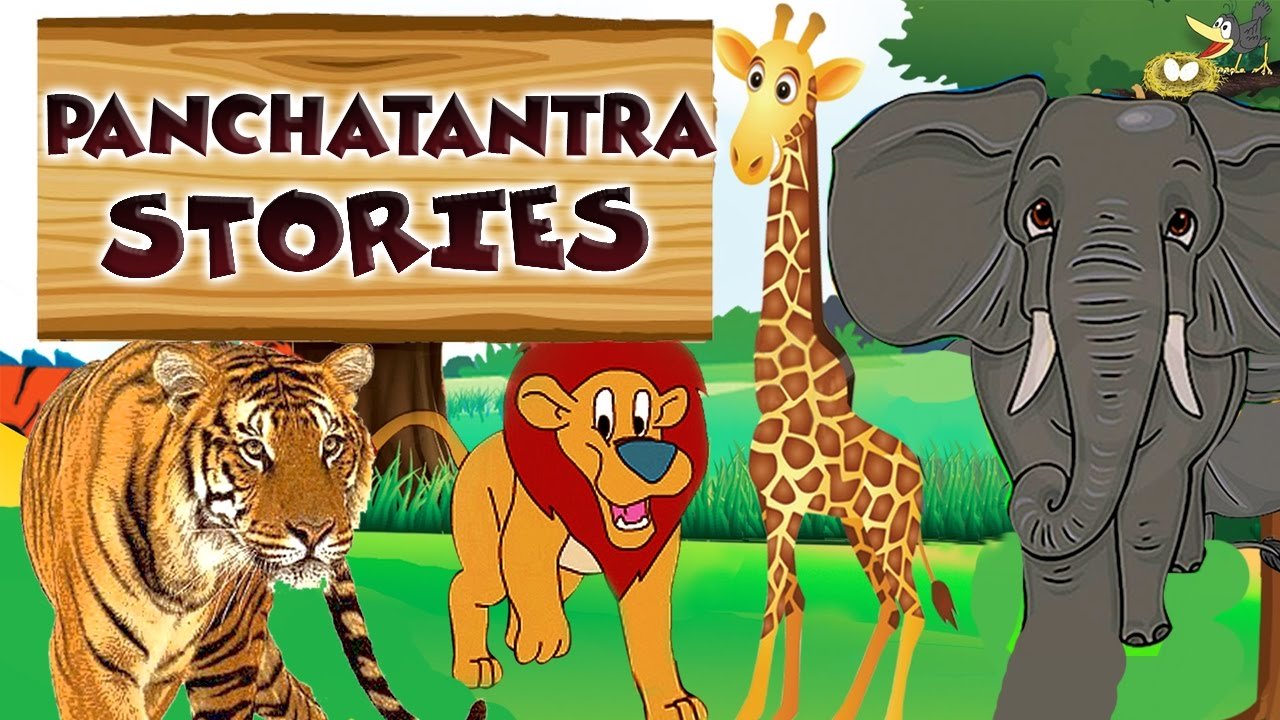 A good story from the Panchatantra collection. Once upon a time there lived a jackal called Chandrao  in the jungle. He was very hungry and searched for food in the whole jungle. But it could not find any food in the forest so the jackal decided to go to the nearby village in search of food.

While going to the village he was attacked by four stray dogs.  The stray dogs surrounded him and attacked him by barking furiously. The Jackal was scared, he did not know what to do. So he ran into a house which belonged to a cloth dyer and accidentally fell into a drum which was filled with blue water. Read further..........

Another classical story from Panchatantra. Once upon a time there lived a strange and peculiar bird with two heads on the banks of a river. It had one pair of legs and one stomach but the neck and the head was divided into two parts.

All the animals in the forest teased and made fun of this bird.  As the bird was walking in the forest the fox looked upon it and teased the bird saying as “ Is it a bird or a monster?  He looks more like an alien or monster than a bird.” For this the Rabbit and other animals replied saying as  “Yes he looks like an alien from another planet. We all should be careful” .

Panchatantra stories have morals and are easy to understand. It can be read by all age groups and just not required only for children. Here is another classical story from Panchatantra tales. Once upon a time there lived a tortoise  called Tom in a lake. He was very talkative and used to talk all day long. Two swans also lived in the same lake. The tortoise used to talk to anyone including from a tiny ant to a huge elephant. The tortoise and the swan became good friends.

The Brahmin and the Mongoose:

This is a popular story  from Panchatantra Tales. Once there lived a Brahmin Devasharma, along with his wife in a village. His wife gave birth to a baby boy and the family was thrilled to welcome the baby home.

The baby used to remain and play alone most of the time as the Brahmin used to go out to perform religious duties and his wife was busy with the household chores. This made both the husband and his wife to think and feel sad for their son. To have a company for their son both parents thought to have a pet animal who can take care of their son and also play with him.

The lion and the hare:

Every Panchatantra tale has its own moral and is very interesting to read. This is another classical panchatantra tale which tells that any crisis can be resolved if we use our intelligence.

It was late afternoon and in the scorching heat all the animals were tired of searching for food. The lion king was very tired as even after searching for the whole day the king could not find any animal for eating. All the animals in the jungle were scared of the lion king as it would kill and eat them. So the animals decided to call for a meeting along with the lion.

Another classical story from Panchatantra tales. Once upon a time there lived a person by name Adithya. One day he was travelling in the forest and felt very thirsty. He went in search of water in the forest.

Then he saw a well filled with water. He went near the well to drink water but to his surprise he saw a man, a snake and a tiger trapped inside the well. The three requested Adhtiya for help and promised not to harm him.

The monkey and crocodile

This is one of the most interesting and commonly heard stories from Panchatantra tales. Let us again read this classical story.

Once upon a time in a jungle there lived a monkey and a crocodile along with other wild animals. The monkey lived on an apple tree next to the river. He was alone but was very happy. In the river there lived the crocodile. The tree was filled with juicy apples which monkeys used to pluck and eat the apples every day.

Long time ago there lived a pair of  crows along with their young ones in a huge banyan tree which was on the outskirts of a small village. Both husband and wife crow were very happy to see their small happy. One day all of a sudden a snake came and started to stay in the same banyan tree which had a small hole at the bottom of the tree.

Monkey and the wedge:

In a large jungle there lived a troop of monkeys. Among all the monkeys one was very naughty and energetic. They lived happily in the forest by eating fruits and swinging on the trees and playing all around.

Once upon a time there lived a sage called Deva Sharma. He lived in a temple on the outskirts of the village. The sage was highly respected and many people visited him very day to take his blessings. They offered gifts, food, money and also garments for the sage.

An interesting story which teaches us not to panic and use our intelligence even during crisis.

Once upon a time there lived a lion and a fox with other animals in the forest. The lion was getting old and was not as strong as he used to during his young age.

One day he went in search of a prey but could not find any animal. The old lion was tired of searching for food. While roaming around in the forest the old lion saw a cave. He was happy that he could find some animal inside the cave to eat.

The frog and the serpent:

Yet another good moral story from the panchatantra tales. Once upon a time  in a small well in the jungle there lived king frog and with his relatives and disciples.

Some of the frogs were not happy with the way king frog ruled over them.  Some of the evil frogs who wanted to become king tried to harm the king frog by misbehaving with him.

The stork and the crab:

Another classical story from Panchatantra tales. We get to learn so much from each story. Here is another one which teaches us that greed is not good.

Once upon a time there lived a number of fish in a tank along with a crab. Next to the tank there lived a stork who used to eat fish from the tank whenever he was hungry.

Days passed and the stork was getting old. Now he was not having the same energy to catch a fish.

Read more about these National Parks 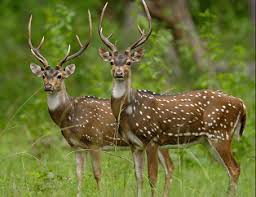 The sparrow and the Elephant:

A good moral story from Panchatantra tales. Once upon a time there was a sparrow living with her husband on a large banyan tree. Both the couple worked very hard to complete their nest on this tall tree. The sparrow couple were living very happily in their nest.

One day the female sparrow laid two eggs.  Both husband and wife were taking turns to sit on the eggs to keep it warm. They were eagerly waiting for the arrival of their babies.

Once upon a time there lived a pious brahmin  by the name Mitra Sharma in a small village. Everyday he used to get up early in the morning and do all his religious rituals.

He was invited by various people in the village to perform the religious ceremonies at their place. One day the brahmin was invited to a house which belonged to a rich man. He performed various religious rituals at his home. The  rich man was very happy with the brahmin and gifted him with a goat. The brahmin happily accepted the goat and placed it on his shoulders.

The Elephant and the Mice

Another classical Panchatantra story to learn and to understand the value of friendship. It is a classical example for “ a friend in need is a friend in deed”

Once upon a time in a small village there  lived a group of mice along with the villagers. Everyone in the village including the mice were living happily.  As  time passed, all the villagers started moving out of the village as there was scarcity of food and water in the village due to many natural calamities.

Panchatantra stories teach us so much. This story tells us that we need to think before doing any act.

Once upon a time in a small village there lived a washerman and his donkey by name Udhata. The washerman used to make the donkey work very hard. He used to make  the donkey carry loads of clothes to the river bank for washing and get them back to his home during the day. It was a lot of hard work.

A classical panchatantra story which teaches us that “never try to  deceive anyone”.

Once upon a time in a small village there lived a rich merchant by name Naduk.  He was very happy as his business was flourishing. The village was on the banks of a river. It was monsoon season and due to heavy rains the river flooded the whole village.

The Hunter and the Doves

Once upon a time  the flock of doves were flying high in the sky in search of food and water. Their king was leading them from the front so that his subjects were not falling into any trouble.

The flock of doves were very tired as they had flown for a long distance. The king encouraged his flocks to fly for a little more distance and then take rest.  One of the young doves moved  ahead of the king and saw some grains scattered under a banyan tree

The girl who married a snake:

Here is another interesting story from the Panchatantra books. Once upon a time there lived a husband and wife in a small village. Both of them lived very happily. The only  concern that was bothering them was to have children. The couple was not blessed with children. Every day the couple prayed to God thinking he would bless them with a child one day.

The lion that Sprang to life: