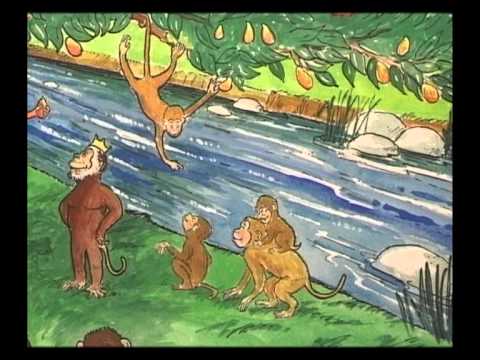 Once upon a time  deep in the forest there lived  a large group of monkeys. The king of the monkeys was very wise and strong. One day he saw a mango tree near the banks of the river. The mangoes of this tree were very sweet and delicious. So the king of monkeys ordered all the monkeys to take care of the mango tree and not a single mango should fall into the river.

The king further explained that if even one mango falls into the river then it goes to different places where all human beings are staying. Then the human beings will come in search of this mango tree and kill all of us.

The king tasted the mango and liked the taste so much that he wanted to eat more such sweet mangoes. Since it was found in the banks of the river the king decided to search the mango tree. He along with some soldiers went in search of the tree.  They went to the other side of the stream where they were able to see the mango tree. The king was very happy to see the mango tree and ordered his soldiers to pluck some mangoes for him.

When all the monkeys reached the other side of the stream ,the king himself got ready to swing and join other monkeys. But the wine branch was too small and weak and could not hold the weight of the monkey king. As he started to swing the branch broke and he fell into the river. All his other monkeys began to cry for help.

The king who was closely watching all this was very pleased to see the responsibility of the monkey King.  He ordered his soldiers to rescue the monkey king and to take him out from the river.

The king said to the Monkey king that “I am very happy and impressed by your responsibility. All your monkeys are safe on the other side of the stream”. Later the king invited the monkey king to visit the palace and take some good rest. But the monkey king did not accept the offer and said that he cannot leave all his monkeys here and come.

Monkey king was very happy to listen to all this and said “ thankyou for sparing my subjects and my kingdom’. Saying so the monkey gifted the king with a basket of mangoes. Every year the monkeys used to send a basket of mangoes to the palace.  Both the kings lived happily with their subjects.

Moral :Be kind to all others in the world