The dancers are accompanied by their teachers or guru and a singer along with the music. The dance includes three forms Nritta, Nritya and Natya. Some of the instruments that are used while performing are Flute, Violin, mridangam, nadaswaram and veena.

The vocalists or the singer is called nattuvanar.  The verses are usually in South Indian languages of Kannada, Tamil Telugu and Sanskrit. Usually a complete performance lasts for two hours without interruption. The performer doesn't leave the stage until the dance is over. 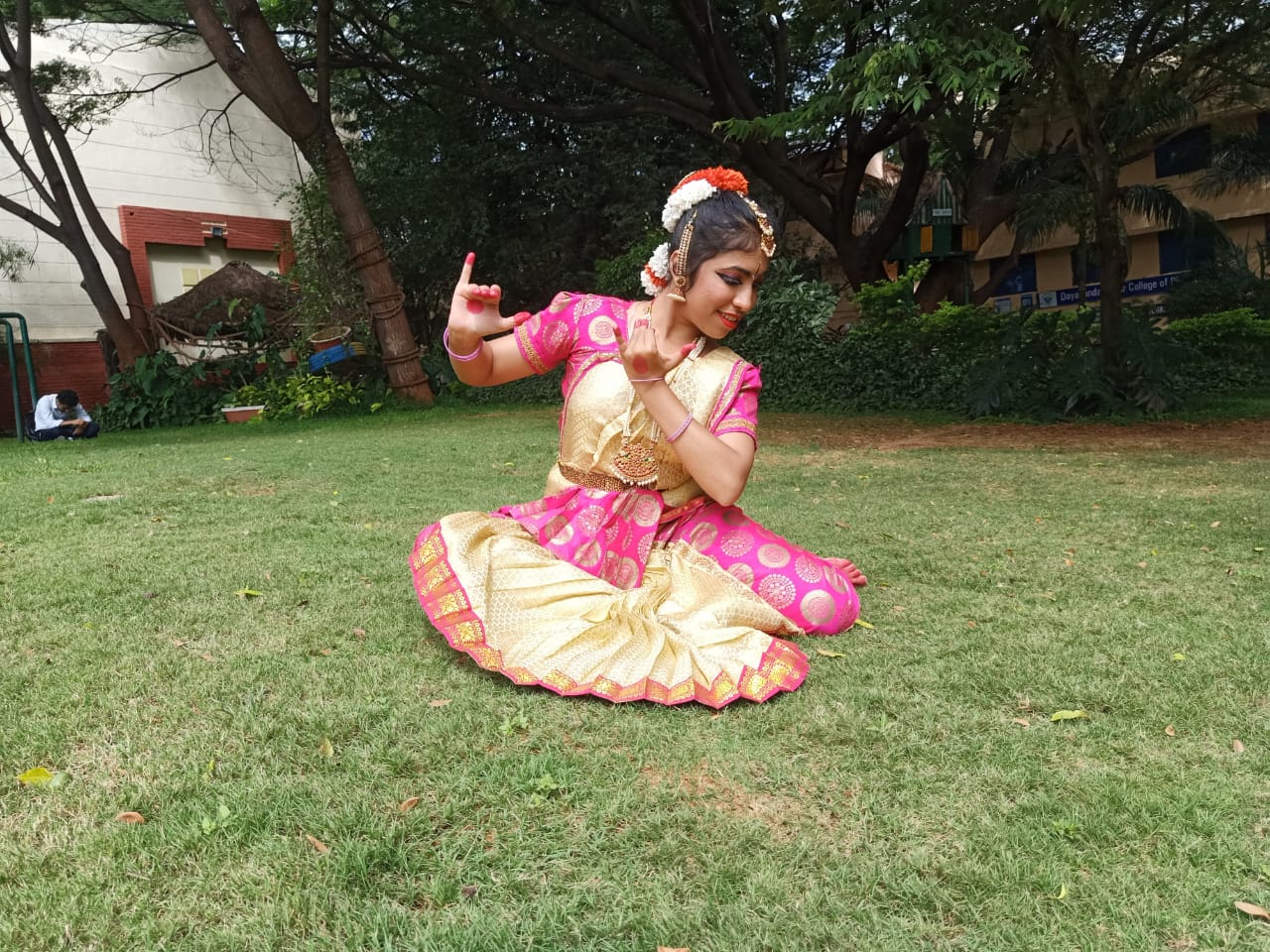 Bharatanatyam is basically derived from two words Bharata and Natyam. Accordingly  Natyam is a  Sanskrit word which  means dance and bharata stands for Bhava, raga and thalam. Historically it is believed that the theoretical part of the dance is found in Natya Shastra.

Natya Shastra is the ancient Hindu text for performing arts. It consists of 6000 verses which include 36 chapters. The text’s first complete version was presumably completed between 200 BCE and 200 CE however it also varies between 500 BCE and 500 CE. 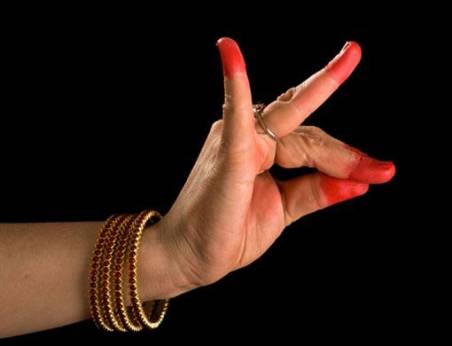 According to the Russian scholar Natalia Lidova, the text Natya Shastra describes many theories of Indian classical dances which includes theory of rasa, bhava, standing postures, gestures and acting techniques.

Some of the other ancient Tamil epics like Silappatikaram (~ 2 century CE) and Manimegalai ( c. 6th century ) mentions Bharatanatyam.  The ancient text Silappatikaram mentions the story of a dancing girl called Madhavi.  Many ancient temples have carvings of different dance poses like the one in Kanchipuram of lord Shiva temple. It dates back to a period between 6th to 9th century.

Check out more about Indian Culture

In Karnataka’s Badami cave temple, cave 1 has a five feet tall sculpture of lord Shiva doing Tandava dance. The 18 arms of lord Shiva express mudras and that are expressed in Bharatanatyam. The cave dates back to the 7th century.

Another classical example is the Chidambaram temple in Tamil Nadu which is dedicated to lord Shiva has 108 poses of Bharatanatyam.

Association with Devadasi and during colonial period

In the early ancient times the temple dancers called as Devdasi became prominent. Devadasi were young girls who were dedicated to the temple to serve the Lord as servants of Lord. According to some reports, Devdasi culture dates back to 300 BCE to 300 CE. Later the Devadasi culture became an integral part of many South Indian temples.

Even though some of the ancient texts and sculptures in the temples do show the existence of dancing girls still there is no concrete evidence to say Devadasis as prostitutes or courtesans as stated by some Indologists.

With the emergence of the East India Company in the 18th century many Indian art and dances saw a decline as it was discouraged and ridiculed by the British. In 1892 many Christian missionaries started an anti dance movement to stop the practice of temple dance. In 1910 the Madras Presidency banned the custom of dancing in Hindu temples thus came to an end of Bharatanatyam.

Check out pages on Indian Music

The Indian community and many performers disapproved of the ban and staged various protests across the country. The Tamil people from whom the Bharatanatyam originated were worried that such ancient, historic and rich dance would come to an end.

Many freedom fighters, artists from different fields and classical artists like E Krishna Iyer questioned the discrimantion for Bharatanatyam. Iyer was later arrested and imprisoned on the charges of nationalism. When serving his jail term, Iyer convinced many political leaders to support the revival of bharatanatyam.

Krishna Iyer founded the Madras Music Academy and teamed up with Rukmini Devi Arundale to save the dance form from dying out. In 1930 an American dancer Esther Sharman came to India and learnt various Indian classical dances. She also changed her name to Rajini Rao and became a part of the ancient dance art revival movement.

The dancer is dressed beautifully with bright saree and heavy jewelry. Bharatanatyam always starts with a prayer to God. The dancers usually bend their legs while performing the dance. The dance has a lot of foot and hand movement with a lot of facial expressions. The emotions of the song are expressed in facial expressions. The basic three elements of Bharatanatyam include are

Nritta: This dance form include fast and rhythmic movements

Natya: it is basically a group performance but can be performed by solo dancers. The dancer uses different body postures for different characters.

The dance begins with a prayer to God, later different sequences of the dance begins like Alarippu, Jatiswaram, Shabdam, Varnam, Padam and Tillana. With the Tillana the performance also ends again with a prayer to God and thanking him. Bharatanatyam includes various postures like Samapadam( where body and legs are straight), Aramandi posture (half sitting till knees) , Muzhumandi

The basic four aspects of performance are Angika ( body movement) Vachika (music recitation) Aharya (costume) and Sattivika (emotional attachment for the story). Bharatanatyam  uses various symbols or mudras. There are approximately 55 mudras to express various emotions and feelings in the performance.

Music is in Carnatic style. The singer or the vocalist is called nattuvanar. The singer may be the guru of the dancer. The song can be in Tamil, Telugu, Kannada and Sanskrit. The instruments used are mridangam,  nadaswaram, flute, violin, veena and cymbals.

Alarippu:  It is combining pure dance with the recitation of sound syllables. It also act as a warm up dance without melody.

Jatiswaram:  It is the next preliminary stage with melody. It is pure in form with any expressed words.

Shabdam: In this words are added in the performance. After Shabdham it is varnam.

Varnam:  After Shabdam the performer starts with varnam. It is one of the important compositions in the repertoire. A varnam is the longest sequence which may last upto one hour along with nritya. It is one of the most complicated sequences with the dancers performing the complicated moves like expressing a verse at two speeds. The movements of hands and body tells us the story of their song.

Padam is the next sequence.  This is the stage of simplicity, of abhinaya (expressing various moods). The bhava is mixed with sahitya and then it is expressed by the dancer. The music is light and the dance is emotional.

The performance sequence ends with Tilana. Nritya comes to an end and returns to Nritta style where a series of pure movement and music are rhythmically performed.

The last and the final item is the sloka or mangalam where the performer calls  for blessings on the people. 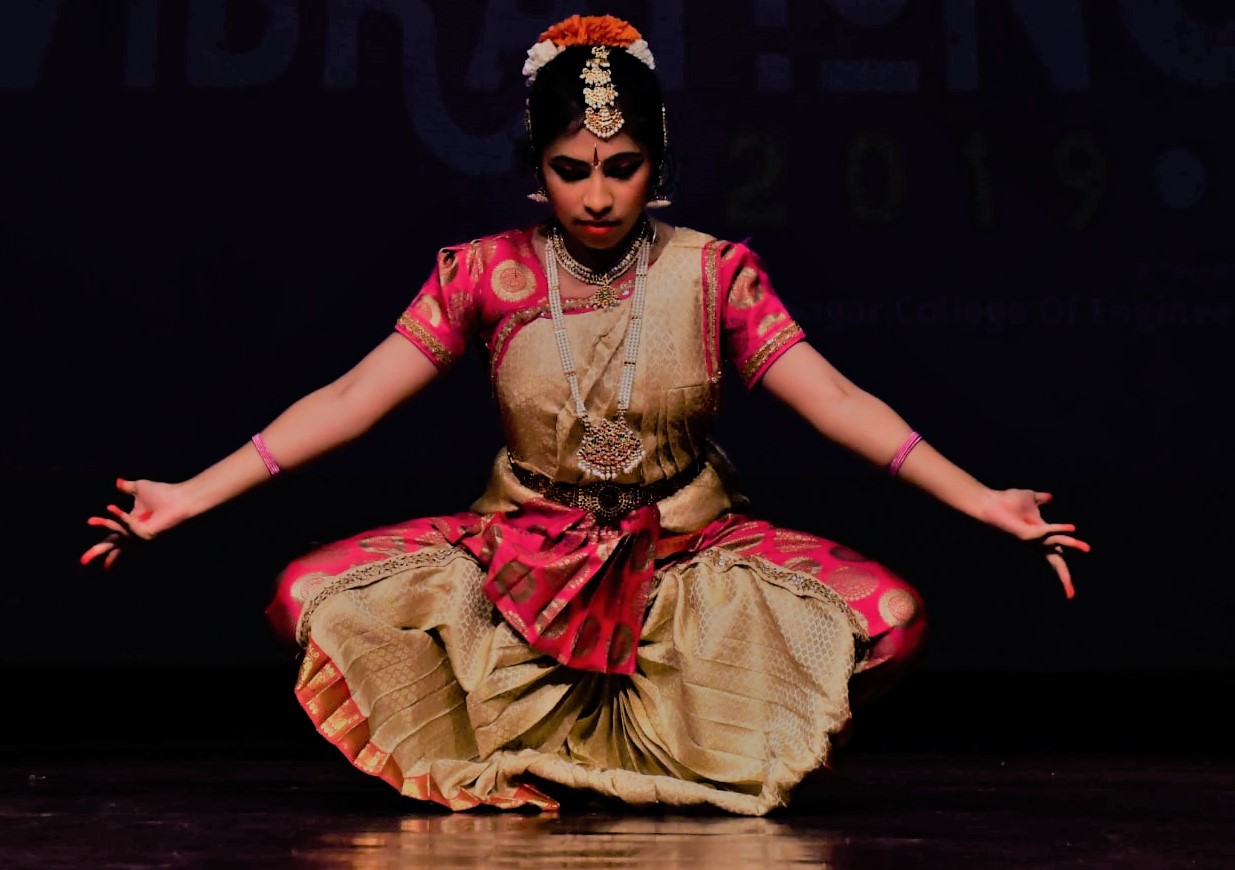 Check out more on Indian Clothing

The dancers wear a heavy saree with a lot of makeup and jewellery. The saree is stitched with pleats which  fall in the front  from the waist. These pleats not only help the dancers to move their feet comfortably but also look beautiful when legs are stretched. The pleats widen and open like a hand fan

The sari is worn in a special manner along with jewellery like anklets, ghungroo, necklace. Hands and feet of the performer are coloured with henna or Kumkum. Her hair is neatly plaited and decorated with a lot of flowers. A jewellery belt adorns her waist. The eyes are highlighted with kajal so that the audience gets to see her expressions properly.

The dance includes extensive foot and hand work along with facial expressions, especially eyes expressions. We can say that it is a combination of four elements: music, expressions, beats and dance.

The verses recited all along the performance are in Tamil, Telugu, Kannada and Sanskrit. Some of the instruments that are used are mridangam, nadhaswaram, nattuvangam, flute, violin and veena

Some of the famous Indian dancers in this form of dance are Uday Shankar, Mrinalini Sarabhai, Mallika Sarabhai, Sonal ManSingh and many more.