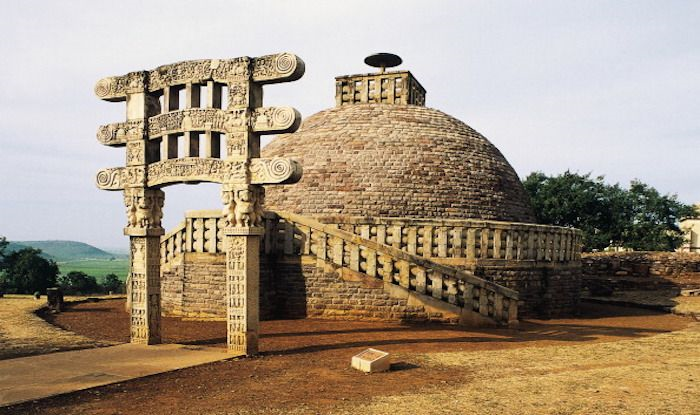 Types of Buddhist Architecture in india

The three important elements of Buddhist architecture include Stupa, Viharas and Chaityas.

Stupa holds a very important place in the Buddhist architecture. Stupa is a hemispherical mound like structure which was used for doing meditation. It is usually surrounded by fence. Stupas usually have a pradakhshina path which is the culture of the Buddhism. It is believed that stupa existed even before Buddha and the Sramana (one who performs acts of austerity) were buried in seated position called as Chaityas.

The early archaeological evidence of the presence of Stupa dates back to 4th century BC. Some of the important and world famous stupas in India include Sanchi, Sarnath, Amaravati, Sonari stupas and many more. 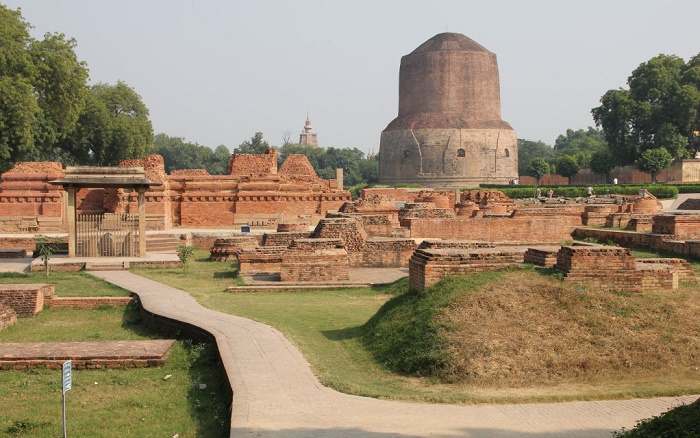 One of the ancient texts of Buddhism known as Mahaparinivara Sutra mentions that the ashes of Buddha were divided into eight portions. Each kingdom where Buddha lived received one portion of the relics and a stupa was erected in each kingdom. The eight stupas where relics of Buddha were spread are Rajagriha, Vaishali, Kapilavastu, Allakappa, Ramagrama, Pava, Kushinagar and Vethapida.

Buddhists source further claim that the great Mauryan Emperor Ashoka took a portion of relics from the earlier stupa and erected around 84,000 stupas across India. Credit goes to King Ashoka of building three different types of monuments like pillars, stupas and rock cut caves. King Ashoka has set up at least 30 pillars which have edicts and carvings on it.  During his period the word stupa first appeared on an inscription in Nigali Sagar Pillar.

The relics of Buddha are considered as living presence of Buddha which still has power and energy of Buddha. It is believed that Buddha has left instructions about how to pay homage in stupas. The stupas were highly decorated with sculptural reliefs and the life history of Buddha.

Stupas were built for various reasons. Based on the reason and function the stupas are classified into five different types.

Relics stupa where the remains of Buddha and his disciple are present.

Object stupa such as the material object like begging bowl, robe of Buddha or his disciple is present.

Commemorative stupa is built to recall the events that took place in the life of Buddha. The other two include the Symbolic stupa and votive stupa.

The railings and the gateways are the most important architecture in Bharhut, Bodh Gaya and Sanchi. In the south it is at Amravati and Nagarjunakonda. Cross bars were provided as support for the pillars and the domes. Above this were the finest carvings of Buddha were kept. Some of the other carvings also included Jataka stories, elephant, Lion, Bull and also the previous births of Buddha.

Importance of stupa in Buddhism:

Stupa became an integral part of Buddhist architecture. It was not only considered as the living presence of Buddha which have the protective powers of Buddha, stupa was also considered as a place for rituals and ceremonies. It also became a pilgrimage centre for the Buddhists.

Sanchi stupa : It was originally commissioned by Ashoka of Mauryan Empire which was demolished by Pushyamitra Sunga and again rebuilt by Agnimitra and later improvised by Saatvahana Kings.

The Bharhut Stupa: It was initially built by Ashoka but later it was improved by Sungas. It is one of the earliest stupas to have survived.

Dhamek Stupa: It is located at Sarnath in the state of Uttar Pradesh India. It is believed to have been built in 500 CE.

Amaravati stupa: Popularly known as great stupa at Amaravati. It is ruined now which was probably built in phases between 3rd century and 250CE.

A Chaitya is a scared place which refers to a prayer hall according to Indian religions. In Buddhism it refers to a prayer Hall with a stupa placed at the centre of the hall. Unlike Viharas Chaityas have high ceilings and are narrow. At the end is the stupa which is the place of devotion and is surrounded by circulambulating or walking path around stupa. Some of the common existing examples for chaityas that have survived are from the Indian rock cut architecture like Bhaja Caves and the great Karla caves.

The Chaitya in Bhaja Caves is one of the oldest surviving caves in India. It was probably constructed in second century CE. It has an apsidal hall along with stupa. The ceiling is constructed with wooden ribs and the walls are polished in the Mauryan style. A large window is usually set up above the chaitya arch. It also had a portico and a balcony gave the impression of ancient large mansion. Even the Bedse Caves have similar architectural work.

Chaityas is also referred in the Vedic literature of Hinduism and in Jain literature. One of the important Jain site such as the Kankali Tila which is near Mathura shows Caita tree, caitya stupa and arches along with meditating Tirthankaras.

Earlier the Chaityas followed the apsidal (is a semi circular recess covered with semi dome) plan and were usually rock cut or free standing. Many of the freestanding Chaitya halls which were built using stone or brick have survived.  By 10th century the Chaityas were taken over by Viharas. The last rock cut chaitya hall that was built was Cave 10 at Ellora. The last freestanding chaitya hall may be Durga temple at Aihole.

Viharas means small centred halls sometimes connected with beds which are carved from the stone. Unlike Chaityas Viharas are small. Some of the large caves like Ajanta, Ellora, and Aurangabad caves and Kanheri caves. The two viharas cave 5 in Ellora and cave 11 at Kanheri both have low platforms. They were mostly used as combination of benches or tables for dining or as desk for studying or for any other important activities. 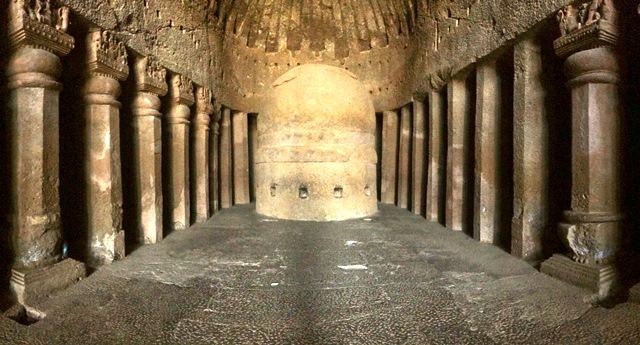 During Ashoka period Viharas were mostly stop and take rest during travel time. Buddhists Viharas meant as a place of residence for monks and also a place for religious work and Buddhist learning. Monks wandered from one place to another by preaching’s the principles of Buddhism. During rainy season or when these monks wanted to rest they stayed in temporary shelters or in Viharas. According to Buddhists texts there are mainly five kinds of residing or dwelling place namely Vihara, Addayoga, Pasada, Hammiya and Guha. Among all other kinds only Guha and Vihara have survived.

Please share your views with us by clicking the link here