Purandara Dasa codified the beginners lessons and laid foundation syllabus for learning Carnatic music.It is  mostly  performed in groups and in the group it consists of a vocalists, person with violin, a person with mridangam and a tambura or veena which runs throughout the song. This music lays a lot of importance on vocal music as most of the compositions are written to sing. Even when Carnatic music is played on any instruments it is performed in the way of singing.

Carnatic music emphasizes on raga and tala. Raga is the melodic formula while the tala is rhythmic. Tala or Tal is tapping of hands on the legs in rhythmic movement in sync with the raga of the song. Laghu, Dhrtam and Anudhrtam are the three basic parts of talas which are performed by the singers while performing. 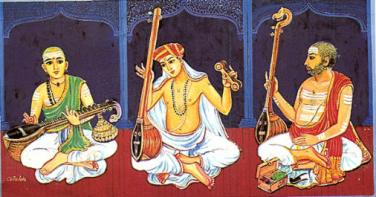 The basic elements of raga, tala, sruti and swara are the foundation of music both in Hindustani and Carnatic. But the tala and the ragas may slightly differ in each . Carnatic music has a large number of composed pieces most importantly the kirtana or kirit which are a form of devotional songs that were developed between 14th and 20th century by Purandara dasa and others.

Origin and History of Carnatic Music

The origin of Carnatic music can be traced back to the prehistoric period. It is also believed that like any other forms of Indian culture even the origin of Carnatic music is believed to have come from Gods and Goddesses. Some of the musical instruments which form a part of the Carnatic music could be seen in the cave paintings and the sculptors in ancient period. One can also see the references of the Indian music in the Hindu epics Ramayana and Mahabharata. Some of the  ancient scholars believe that the development of swaras belongs to sounds of animals and birds.

The Vedas are considered as an important source of Indian music. Sama Veda which consists of the hymns from Rig Veda is believed to have laid the foundation for Indian classical music. There is a mention of Veena ( String musical instrument) in Yajur Veda.

During Vijaynagara Empire period Carnatic music got further boost through the Kannada Haridasa movement of Purandara dasa, Vysaraja, Kanaka dasa and others.

The 18th century was an important period for Carnatic music as during this period there was trinity in Carnatic Music. Tygaraja(1767-1847), Muthuswami Dikshitar(1775/6-1835) and Syama Shastri(1762-1827) brought huge changes in Carnatic music. Among the three it can be said that Tygaraja was the most prominent and prolific in nature.

He composed various songs in his own mother tongue Telugu. Most of his songs are composed by lord Rama. Many others have contributed for the development of Carnatic music some of them are MS Subbalakshmi, Bombay Jayashri, DK Patamal, Aruangiri Nathar and many more. Even though the main emphasis in Carnatic music is vocal music, still some important elements in Carnatic music are Sruti, swara, raga and tala. Raga consists of seven notes by SA Re Ga Ma Pa Dha Ni SA.  Ragas are further divided into Janaka Ragas (Parent Ragas) and Janya ragas (descendant ragas from parent raga).

Nature and Compositions of Carnatic Music 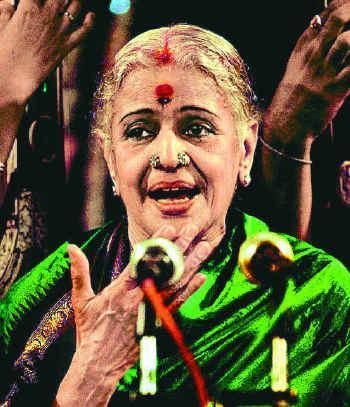 It mainly describes the whole of the composition.and is sung at different speeds.  Known for its complexity varnam is the basic foundation in Carnatic music. There are different types of varnams and all have pallavi, anupallavi,muktayi, swara,a charana, and chittaswara.

Kirti is the backbone of any Carnatic music and it varies in structure. It consists of three units called Pallavi, Anupallavi and Charana.The last line in the Charanam usually contains the name of the composers which helps the audience to know about the composers. Kirti was a form developed between the 14th and 20th century. Some of the kirtis have verse between anupallavi and charanam called as chittaswara. This type has no words and consists only of verse.

It is written either in Roman or Indian script to represent the notations. Further these notations are divided into columns. Carnatic music has melody and is sung in temples, during festivals at home or in a concert. The beauty of Carnatic music is that it is composed in a particular raga and when the singer sings that composition they do not deviate from the notes in the raga.

Some of the important and basic elements in Carnatic music includes Sruti, swara, raga and tala

Sruti: It is a Sanskrit word which is an important concept in Indian music. It is a pitch produced either by a singer or musical instrument which is audible to the human ear. In Carnatic music  there are an infinite number of sounds coming under the scale however the number which can be distinguished for auditory perception is 22.

It is a Sanskrit word which connotes musical notes in successive steps of the Octave. It defines the relative position of the note rather than a particular frequency. A swara is different from Shruti in the context of Indian music. Swara is also referred to as solfege of Carnatic music which has seven basic notes sa, re, ga, ma, pa,dha,ni. Solfege also known as solfa or solfeggio is a system where every note of a scale is given a unique syllable which can be a major scale or minor scale.

It is a set of rules for building a melody in Carnatic music. The principal raga in Carnatic music is called Melakarthas. Melakarthas raga are the parent raga from which other ragas may be generated. It is also referred to as sampoorna raga. There are 72 Melakarthas raga in that 36 are madhyama ragas are shuddha and the remaining 36 of madhyama raga is prati. Ragas are further divided into Janaka raga and Janya ragas.

Tala means clapping of one's hand in a rhythmic  beat that measures musical time. It can be clapping hands, touching fingers on the lap or striking small cymbals. Tala rarely changes with the tala. Raga and tala are the two fundamental elements in Indian Music.

There are seven talas : Ata, Dhruva, Eka, Jhampa, Matya, Rupaka and Triputa tala. Raga is a set of rules prescribed with definite melodic restrictions. These rules are basically for the scale and notes of the song and which note should be used more as compared to the other and which note should be sung along with gamaka or ornamentation. The main essential aspect of Indian Carnatic music is the improvisation in the raga. Some of the main forms of improvisation are Alapana, Niraval, Pallavi, Ragam, Swarakalpana, Tanam and Tani Avartanam.

Some of the main types of improvisation in Carnatic music.

Nirval-- Improvisation of melody for any particular line. Usually one or two lines are repeated with more improvised elaborations

Kalpanaswaram-- is a melo-rhythmic improvisation in a specific tala. In Carnatic concert Kalpanaswaram is performed for the main song.

Tanam--- Tanam is one of the most important and integral parts of Ragam Tanam Pallavi.

Ragam Tanam Pallavi--- It is a form of singing in Carnatic music where the singer can improvise a song to great extent.

Tani Avartanam-- this is usually played after the main composition in a concert.