Origin and History of Hindustani Music

It was around the 12th century when Hindustani music started to diverge from Carnatic music. The basic concept in both Carnatic and  Hindustani is that of melody or raga sung along with tala. This tradition dates back to the Sama veda period where the hymns of the Rig veda are sung. These principles were redefined in Natya Shastra written by Baratha.

With the invasion of Muslim dynasties like the Delhi Sultanate and Mughals in North India there was a huge cultural influence on the people of North India. Qawwali and Khyal developed during the Muslim rule. AMir Khusrau who was a great musician during Delhi Sultanate period developed many ragas in Hindustani music like the Yeman kalyan,Zeelaf and Sarpada. Amir Khusrrau is considered as the father of qawwali. Many of these great composers created many musical forms which were merged into Hindu traditions in the work of Kabir and Nanak. This was part of the Bakti traditions. 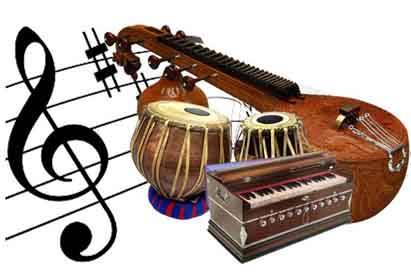 Hindustani Music reached its peak during the Mughals period and during the Akbar reign. Tansen who created several new ragas and is known for Drupad composition is the famous Hindustani musician. Even the royal house of Gwalior, Raja Mansingh Tomar saw a huge development of Drupad raga in his court and was an important raga of Gwalior gharana for many centuries.

The rhythmic patterns of music are called tala and the melodic foundations are called as thaats are part of ragas. Thaat may have up to seven swaras. Hindustani musicians compare these pitches with the western system of solfege.

Hindustani musicians name these pitches as Sargam. Both Hindustani music and the Western music use Octave. The only difference between them is re,ga,ma,dha,ni. The three types of octaves in hindustani music are low (mandara),  medium ( Madhya) and High (tara). As the Octave is not fixed the musicians can also use the mix of the two like Mandara-Madhya or madhya-tara. A typical Hindustani raga includes two stages

Alap and Bandish. Alap is the rhythmically improvisation of the rules of raga. Alap is further divided into Alap, jod and jhala.

Hindustani music is formed basically for vocal performance. The musical instruments used in Veena, Sarod, Sarangi and violin. The major vocal forms that are associated with Hindustani music are Dhrupad, Khayal, Ghazal, Thumri, tarana and thappa.

Dhrupad is very old form and is usually sung by male singers. The singers perform with musical instruments like tambura or pakhwaj. The lyrics are often sung in Bhrajbhasha (a language spoken in East India). The content and theme is usually in praise of some particular deity. Some of the prominent singers who sing in Dhrupad style are Nasir Moinuddin and many more.

Khayal is more of modern Hindustani singing style. Khayal means imagination. Khayal sets two to eight line lyrics as melody and the singer uses these lines for improvisation accompanied by harmonium or sitar. A khayal song is called as Bhandish. The compositions cover various topics like romanticism, praise for Lord, Seasons, Dawn and Dusk. Some famous Khayal singers are Bhimsen Joshi, Amir Khan, Rashid Khan and many more.

Ghazal is an important form in Hindustani music. It is written in Urdu. Ghazal exists in different forms like poetry, folk, pop. Some prominent ghazal singers are Jagjit singh, Pankaj Udhas. Ghazals are very melodic to listen and has good meaning and message.

Thumri: The origin of thumri is still not clear as there is no historical evidence until 15th century. The text of thumri is usually romantic sung usually on Lord Krishna and his gopikas. Some singers of thumri are Noor Jahan, Gauhar Jan and many more.

Tarana are usually performed at the end of the concert to convey the mood of joy. It is rendered at medium to fast pace and was invented by Amir Khusrao. Tarana was also used by the tenth Sikh Guru Gobind Singh in his compositions.

Thappa is very catchy kind because of its bounce and re bounce of its notes. It started as folk songs of camel riders in Punjab however it became popular only in late 19th century and early 20th century. Its tune is melodious and sweet and depicts sudden outburst of love. Some prominent singers are Balashaheb poonchwale, Shruti Gokale and many more.