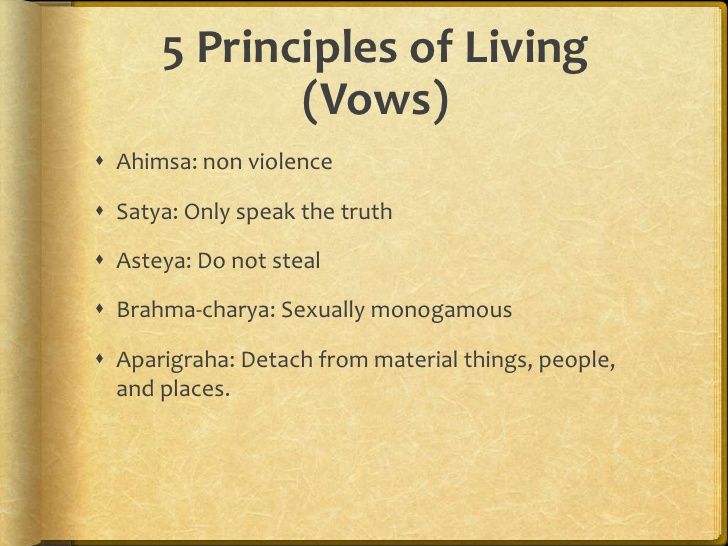 Ethics and Jewels of Jainism

Jewels of Jainism: Right Faith, Right Knowledge and Right conduct. The Three Jewels constitute the basis of the Jain principles and ethics. right knowledge, faith, and practice must be cultivated together because none of them can be achieved in the absence of the others. Right faith leads to calmness, detachment, kindness, and the renunciation of pride of birth, beauty of form, wealth, scholarship, prowess, and fame.

Right faith leads to perfection only when followed by right practice. Yet, there can be no virtuous conduct without right knowledge, the clear distinction between the self and the non self.

Knowledge without faith and conduct is futile. Without purification of mind, all austerities are mere bodily torture. Right practice is thus spontaneous, not a forced mechanical quality. Attainment of right practice is a gradual process, and a lay person can observe only partial self-control; however, is able to observe more comprehensive rules of conduct. 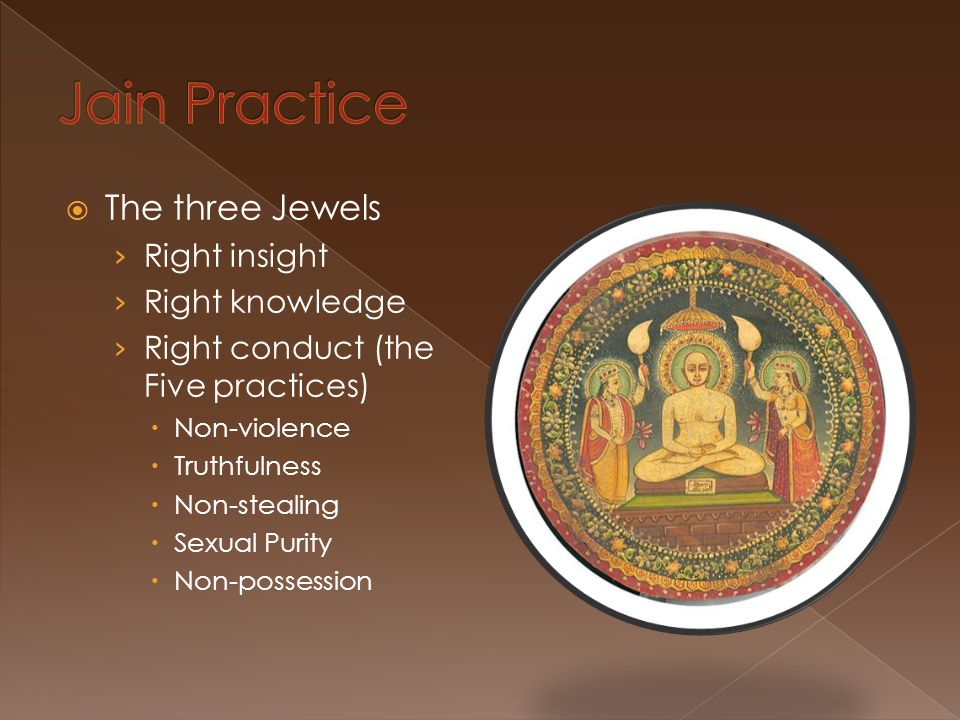 Jainism prescribes five vows to follow for a lay person and for an ascetic also known as anuvrata and mahavrata. These vows are observed and practised more strictly by the ascetic and less followed by lay person.  These five important vows are

Ahimsa— nonviolence or not hurting any living thing either physically or mentally. This is the most important principle in Jainism.

Satya— speaking and following truth in the life. It also underlines that people should also not support person who is lying.

Asteya— not to accept anything given for free or not to take anything without permission. It means not stealing anything. This vow applies even to action, speech and thought. The vow further explains that even if anything is unclaimed or unattended then also people should not take it.

Brahmacharya--- total control and abstinence from sexes and sensual pleasures. This should  be followed by Jain monks and nuns. Brahmacharya is an important concept in Indian religions which literally means on the path of Brahma.

Aparigriha – detachment from all worldly luxuries in life. Jainism believes strongly that a person with more worldly wealth will more likely to commit more sin and be unhappy.

These simpler vows include Brahmacharya and also no bigger violence should be done to higher life like animals, humans etc. further there are seven supplementary vows are also prescribed that are three gunavarata (merit vows ) and four Shiksh vrata (disciplinary vows).

Sallekhana also known as Samelana or Sanyasana Marana is another supplementary vow practised in Jainism. It means gradual reducing the intake of food or liquids till death. It is a voluntary action and it is done with an intention of attaining moksha.

Jin scholars do not consider this as a suicide and it is available for both Jain ascetics and householder. Sallekhana is divided into two parts namely Kashaya Sallekhana or Abhyantara Sallekhana and kaya sallekhana  or Bahya Sallekhana. Jain texts clearly differentiate between Sallekhana and suicide by saying that soul and matter are different.

However Rajasthan high court had declared the practice of Sallekhana as illegal in the year 20015 and later the Supreme Court of India lifted the ban on sallekhana. 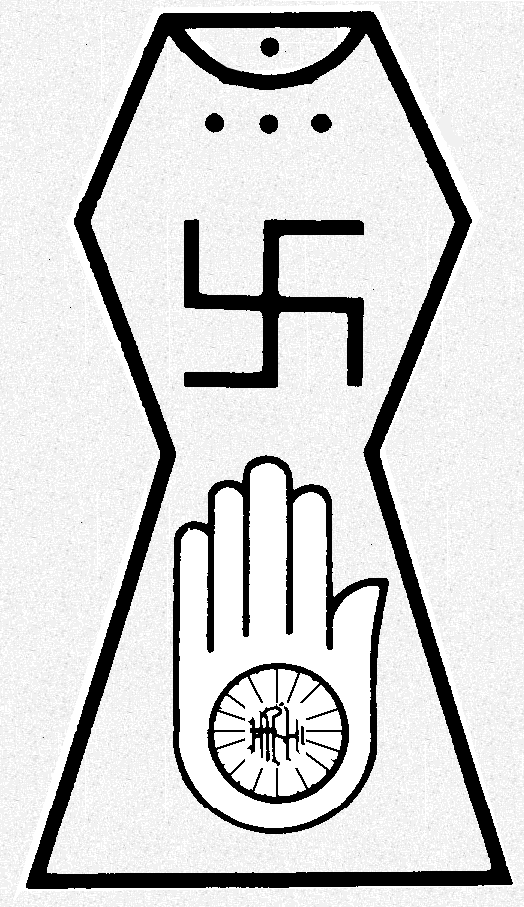 Jain symbols: In the year 1975 Jains celebrated the 2500th anniversary of nirvana of Lord Mahavira. On this day Jains accepted the symbol for Jainism.  The symbols hold many symbols within and which has deeper meaning. Jain community with great devotion selected this symbol as it has many other symbols. The symbol has an outline which represents universe, an open hand with a wheel on the palm, swastika and three dots.

The outer line is divided into three parts, the upper part indicates heaven, the middle part indicates the world with pleasures and the lower part indicated hell. At the top most of the symbol is the semi circular curved arc which represents the place of Siddhas also known as Siddhashila. Siddhas are person who have achieved enlightment. In Jainism siddhas means liberated souls who have attained moksha.

Sawastik is an important symbol in all religions.  It consists of four arms each one explaining the four state of existence. It explains us the cycle of birth and death. It further teaches us that our main motto should be to attain moksha not rebirth. This perfect state of liberation is represented by crescent and the dot at the top of the svastika.

The three dots above Swastik represent right faith, right knowledge and right conduct. The hand which has a wheel represents Ahimsa. It says that we should not indulge in any kind of non violence act. The circle in the hand represents samsara and the 24 spokes inside the wheel represents the preaching’s from 24 thirtankaras.

There are eight each auspicious and important symbols both in Digambara and Svetambara sect:

In Digambara the eight symbols are

The eight symbols of Svetambara are

Jainism does not believe in the creator of God. It says that God is in every soul. It believes that universe and all the worldly constituents were always present. It rejects the idea of creator deity. Jain cosmology gives an indepth description about the heavenly bodies but they are not considered either as creators or as Gods.

Jainism further describes the attendants of Thirthankaras known as sasanadevi or sasadevatas create or develop the place of the preaching assembly.  Accordingly the Gods are classified into four classes that are Bhavanadipathis, Vanamantaras, Jyotishkas and Vaimanikas. Acharya Jinasena in Mahapurana clearly declines the presence of any creator.

Jainism believes that any human soul who has conquered and has complete control on his inner mind and has good knowledge is called as Jains or Arihant. Accordingly an arihant is a soul which has detached itself from all worldly pleasures and inner passions.

Further it is believed that these Arihants become siddhas and these siddhas at the time of nirvana or moksha is permanently moved out of the cycle of birth and death. These siddhas have no shape or size.

It is said in the books that everyone should aim to become siddhas in life and the Jains should pray to these Gods not to get any favour or help but to destroy the karmas of what they have done and achieve good hood in their lifetime.

Jainism has five highest religious authorities called as Pancha Parameshti in Sanskrit. They are

Arihant – people who has gained complete control over his emotions and feelings and possess very good and right knowledge. They are also referred as Jina.

Siddha: The soul that has moved away from the cycle of Birth and Death.

Jainism has two main sects known as Digambaras and Swethambaras. Both of them differ in their practice, belief and culture. In India alone there are around five million followers of Jainism.