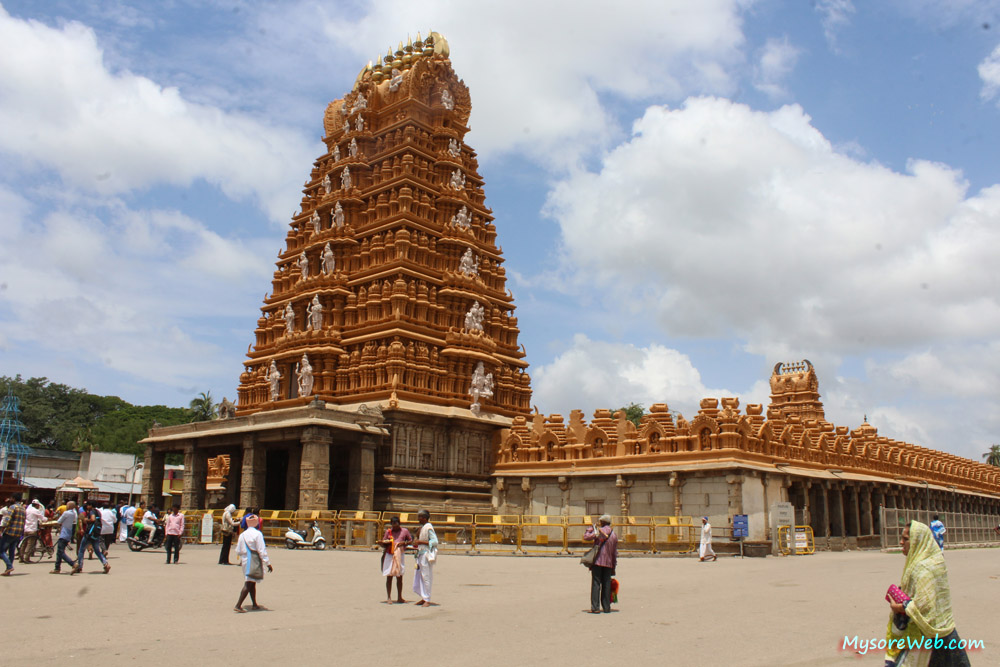 Nanjangud is an important temple town located close to Mysore, Karnataka India. It is also known as Dakshina Kasi which is situated on the banks of Kabini river. It is a very ancient pilgrimage place very closely located to Mysore, Karnataka. One can plan to visit the temple and also nearby places around Mysore.

The place is very famous for the Sri Kanteshwara temple which is dedicated to Lord Shiva. Nanjangud is a Kannada word which means the place Lord Nanjundeshwara lives or resides. The name of the place has its origin from Lord Shiva which means who consumed poison to save mother Earth. Hence Lord Shiva is also known as Neelakanta. The place is famous for the Lord Najundeshwara temple where thousands of people visit every day. 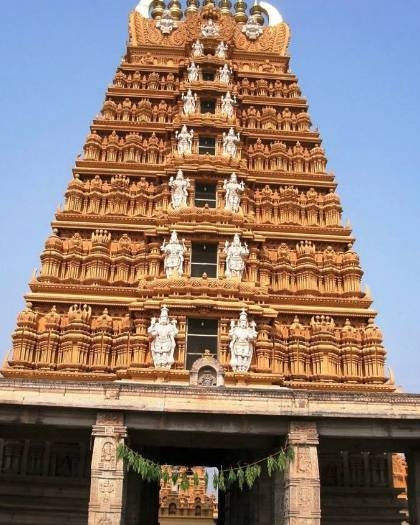 Sri Kanteshwara temple also known Nanjundeshwara temple is a very ancient temple located in Nanjangud. The temple is located on the banks of river Kapila which is a tributary of River Kaveri. It is believed that the temple was constructed as early as 12th century during the Chola period and later significant improvements were made by Hoysala’s and Vijayanagara empires.

Sage Gautama stayed in Nanjungud and offered prayers to the Shiva Linga which is known as Srikanteshwara Linga. The temple has one of the most finest and wonderful architecture. The temple is supposed to be the biggest temple in Karnataka which measures of 385 feet by 160 feet and a total area of 50,000 square feet.

Another major attraction is the huge stone bull which is 8ft in height. This was probably established by Dalavayi Vikramaraya in 1644. In front of this bull is the thula bhara mantapa. The temple has a very big prakara or the courtyard. The prakara is decorated with 122 images of Dikpalas, Vira bhadra. Dakshina Murithi and various forms of Lord Shiva. These sculptures depict the beauty of the temple and also there are many bronze icons of Tandaveshvara, Narayana with Bhudevi, Chandrashekramurthi, Parvati and many others.

The image of Goddess Parvati is five feet in height and the sculpture belongs to early medieval period. The main shrine has a huge shikara which was built during Vijayanagara period. The inner part of the temple also has sculptures and images of Ganapati and other Gods. The Nanjundeshwara temple is one of the vast and ancient temple in Karnataka and is a must visit temple to get the blessings and also to enjoy the architecture of the temple, various rulers and dynasties have made huge contributions for the development of this temple.

The temple hosts Rathothsava annually during which thousands of people visit the temple. During Rathosava many rituals are carried on and after which five chariots are moved through out the temple. The five chariots are Ganapathi Ratha or Chariot, Chandikeshwara ratha, Gautama Ratha, Subramanya ratha and lastly Parvathi ratha. This is held during Dodda Attre where the Chariots are pulled all along the Ratha beedi (road). The temple is open on all days from 6 am to 1pm and from 4 pm to 8:30pm. The temple remains open from morning 6am to evening 8:30pm on special occasions, Sundays and Mondays

Places to visit in Nanjangud

Nanjungud is mainly a pilgrimage centre with many temples. The main temple is the Srikanteshwara temple. Other places are

This is another important place to visit near Nanjungud. This place has a sangama of Kapila and Kaundinya rivers. It is believed that sage Parashuram came here and cleaned himself in these rivers after cutting his mother’s head. Later sage Parashuram performed penance at Nanjundeshwara temple and achieved peace at this place. It is believed that sage parashurama while cleaning his axe hit Lord Shiva on his head accidentally. Blood started to drip down from Lord Shivas head, Parashuram got sacred but lord Shiva consoled him and said he has not committed any crime. Later Lord Shiva asked sage Parashurama to perform penance at Nanjungud. The place later became famous as Parashuram Kshetra (place).

Oldest bridge in India: Built on the river Kabini this bridge is the oldest bridge in India. It was built in the year 1735 with brick by Dalvoy Devraj. The bridge has both railway and road way and has gothic arches of 10 ft span. It has been declared as heritage monument by government of India.

Other attractions are Prasanna Nanjundeshwara swamy temple and Guru Dataatreya swamy temple. Close to Najungud there are many places to visit .some important places are Mysore, Bandipur National Park, Shivana samudra, Chamundeshwari temple and many more places.

Check out the best hotels in Bangalore

How to reach Nanjangud

How to reach Nanjangud

The nearest domestic airport is Mysore and international airport is Bangalore. Nanjangud has a railway station and various trains stop at Nanjangud.

Nanjangud is well connected through road. There are many government and private buses from all the major cities of Karnataka. 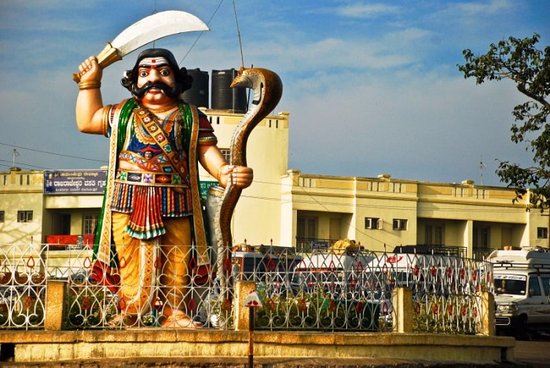 The Chamundeshwari temple is a very important temple located on the Chamundi Hills around 13 Km from Mysore, Karnataka, India. It is one of the 18 Maha shakti Peetas and is considered as Shakti Peeta. Being also known as Naada Devathe (state Goddess) this temple is a very important pilgrimage centre and tourist place for Karnataka. Chamundeshwari temple is also krouncha Peetam as it is believed that earlier the hair of Sati Devi (daughter of Daksha prajapatha) fell here. 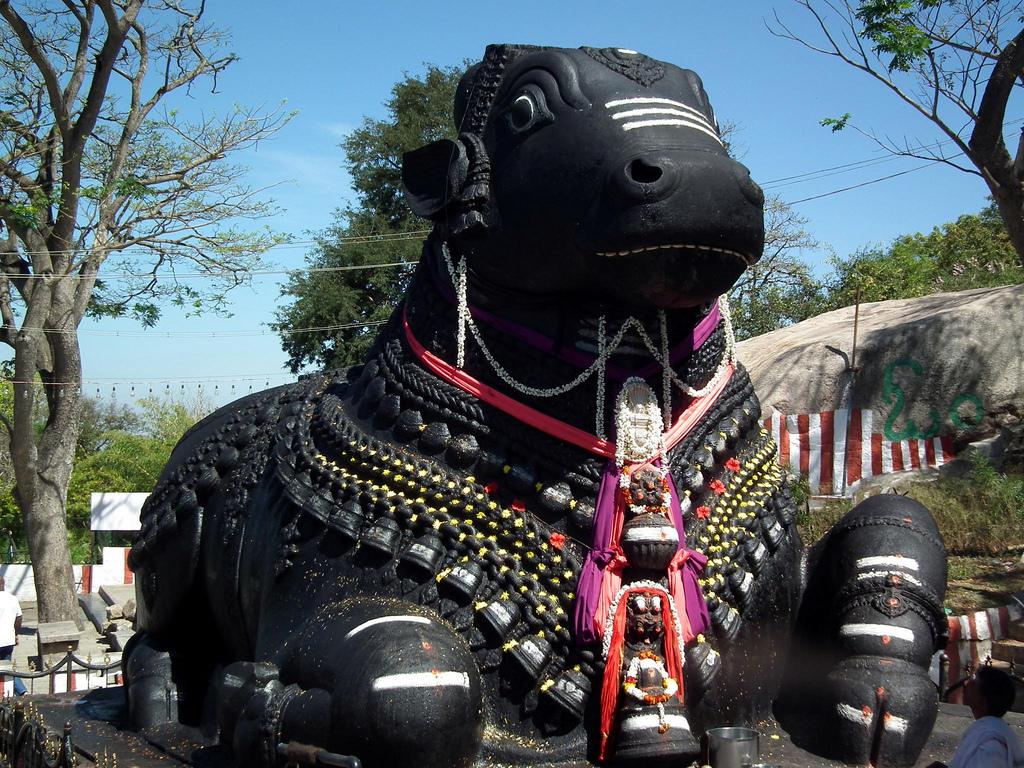 The Chamundeshwari temple is a very old temple probably built during Hoysala’s period and the Gopuram is probably built during Vijayanagara period. Later even Mysore Maharajas further beautified the temple. The shrine is considered to be even older that the temple itself. Chamundeshwari God being the family deity of Mysore Maharaja has further expanded the temple and has made huge contributions for the development of the temple.

In the year 1659, Maharaja Dodda Devaraja set up a flight of 1000 steps up to the top of the Hills.  It is believed that Chamaraja Wodeyar IV worshipped the Goddess in the year 1573 when he was miraculously escaped from the lightening. Wodeyar’s have developed the Chamundi and have made huge contributions to the development of the temple. Maharaja Krishnaraja Wodeyar II built a huge gopuram and presented the Nakshatramalika jewel with Sanskrit verses inscribed on it. 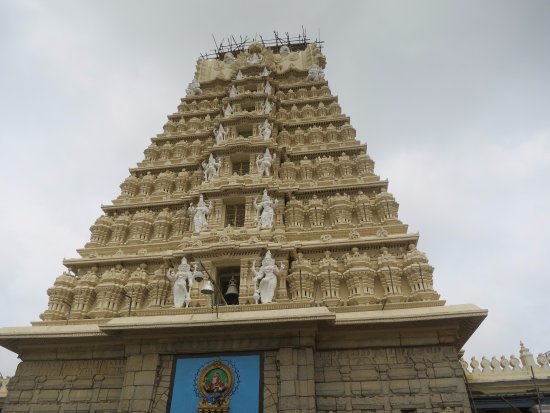 The temple is built in Dravidian style of architecture with huge gopurams. To reach the temple one can either climb 1000 steps or drive down by road. While driving through the half way that on the 700th step one can see a huge Nandi statue in front of small Lord Shiva temple. As one reach the summit the tourists is greeted by huge statue of Mahishasura. The temple has a seven storeyed Gopura which has beautiful intricate carvings on it.

The tower has seven golden Kalasa on it.  At the entrance of the temple there is a small Ganesha idol on the doorway. The entrance of the door is covered with silver plated which is decorated with different forms of Goddess. The doorway further leads to Mukha mandapa and Navaranga Hall, Antharala Mandapa and Prakara. The Antarala mandapa has a huge idol of Ganesha on one side and Bhairava( Lord Shiva ) on the other side. The sanctum has a beautiful eight armed idol of Goddess Chamundi in a seated posture.

Some of the most important festivals celebrated by the temple are Aashada Shukravara (Friday), Navaratri and Mysore Dasara. Friday is considered as an auspicious day for the temple. Thousands of people visit the temple on Fridays. During Chamundi Jayanti the utsava murthy of Goddess is taken all around the temple. The temple is open from morning 7:30 am to 2pm and from 3:30 am to 6pm and 7:30pm to 9pm. The Abhishekha timings are 6 am to 7:30 am and 6pm to 7:30 pm and on Fridays it is 5am to 6:30am

Places of interest near Chamundi Hills

There are many places of interest near Mysore like Nisargadhama, Srirangapatna, Mysore Palace, Talakaveri, Talakad, Ooty, Bangalore and the list goes on. There are also many National parks and wildlife sanctuaries like Bandipur National Park, Nagarhole wildlife sanctuary. Plan your visit and you can book your hotels in Mysore by clicking on the link given above. It gives list of some of the best hotels at best deals.

Check out the best hotels in Mysore

How to reach Chamundeshwari temple