Open: On all days

Bandipur national park is considered as one of the most beautiful tiger reserve located in Karnataka, India. The state has the highest number of tiger population in India.  It is the most important park formed in the year 1974. The park is part of Nilgiri Biosphere Reserve along with Mudumalai National park, Silent Valley, Nagarhole, Mukruthi, Aralam national parks Wayanad, Satymangalam wild life sanctuaries.

Bandipur National park is located on Mysore-Ooty highway. The tiger reserve covers an area of 874 sq km which is home for many endangered species of animals and flora. The park has different altitudes as it is located in the Deccan Plateau where it meets the Western Ghats. Due to its different altitudes the park is gifted with different habitat including dry deciduous, moist deciduous and Shrubslands.

Due to different altitudes the park is gifted with comfortable climate for most part of the year. The temperature ranges from 240 C to 280 C except during the winter when the minimum temperature drops to 190C. The park has dry and hot climate till the arrival of monsoon.  Some major rivers flowing are Kabini River to the North and Moyar River to the South and Nugu river flows through the park. Himavad Gopalswamy Betta (hill) is the highest summit in the park.

Bandipur has some breath taking flora and fauna. It can be said as heaven on earth. The flora consists of dry deciduous forest, evergreen forest and the scrubs and open grasslands. The park has variety of timber trees including teak, rosewood, and sandalwood and kino tree. It is also home for variety of flowering and fruit bearing plants like kadam tree, gooseberry, golden shower tree, black cutch, black myroblan, tamrind tree and many more.

Fauna in Bandipur is just amazing to watch. The park is famous for some wonderful animals like elephants, tigers bonner macaque, jungle cat, four horned antelope, cat, leopard, Langur.  I am sure that Wild life lovers would thoroughly enjoy the visit. The thrill of exploring the dense forests and witnessing a large variety of animals in their natural wild habitat is beyond words. . 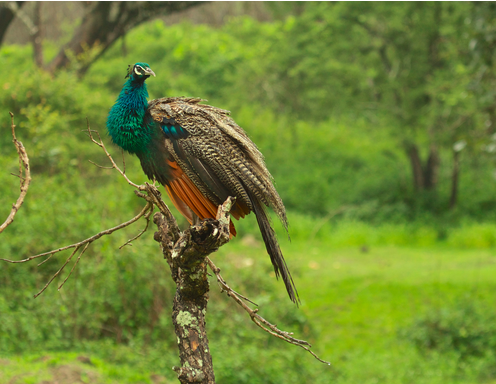 Jeep Safari: This accommodates six people. The jeep safari takes you inside the jungle where chances of spotting tiger and other wild animals are more. Jeep should be hired from the park.

Bus safari: This safari takes around the park. It is a 45 minutes drive. One can see deer’s, monkeys and other animals. The bus can accommodate up to 20 -25 persons.

Elephant safari: This safari is one hour and is available during peak season. This safari takes deep in to jungle for 20 mins.

No safari is available after 6 pm to protect the interests of the tourists and the animals. The timings and the availability of safari also depends on the season, availability of the vehicle and weather conditions. 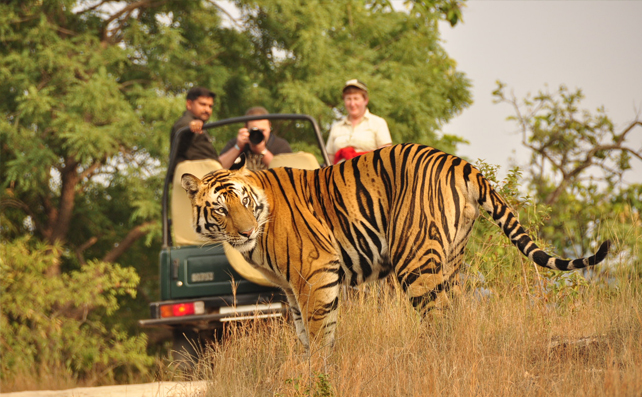 How to reach and general information

Tourists cannot take their own vehicle for safari. There is no night safari or trekking. There is a ban for traffic from 9pm to 6am to protect the animals and the tourists. The park is open through out the year but the best time to visit the park is from October-May. Spotting of animals is easy during summer season as the trees would have shed the leaves and animals would come near the rivers to thirst he quench. Summers are from March-June. The weather would be pretty warm and dry. Winters are pretty cold where the temperature may reach up to 15oC.

By Air: Bangalore international airport is the nearest airport. Bandipur National park is 255 Km from Bangalore.

By rail: Mysore is the nearest railway station. Mysore is 80 Km from Bandipur. From mysore one can taxi to drive till Bandipur National park.

By road: good transport facility is available from Tamil Nadu and Karnataka. Cabs can also be hired from Ooty and Mysore.

It is very important that we maintain and follow the rules of the park to protect the animals and safety of the tourists. Keep the nature in good condition. There are lot of resorts and hotels near the park. Enjoy the trip.