Caste system played a predominant part during ancient India. Aryans who came to India brought along with them their beliefs, customs and social behaviour. They divided the society into four castes. The four dominant castes were Brahmin, kshatriya, Shudra and Vaishya. Brahmins were considered as superior and were respected by all other castes. They were mostly Gurus (teachers) and priests. Kshatriyas were rulers/ defenders of the country.  Vysyas were the traders.  In a way the caste system was essentially a division of society based on their work..

The varna or the caste was first mentioned in purusha suktha of Rigveda.  The literal meaning of ‘Varna’ is colour.  In one way the caste system can be depicted with the skin colour of the people. The ‘varnas’ or the four castes have been discussed extensively in Dharma Shastras. Even an extensive discussion and reasoning have been found in Manu Smritis. 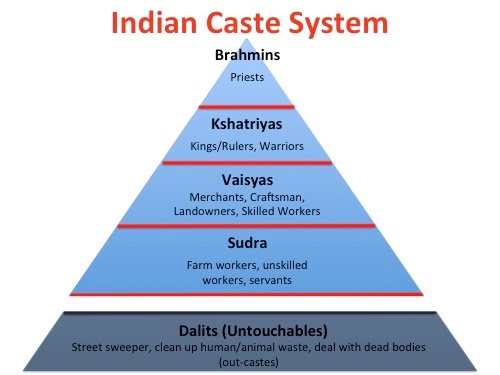 People in the ancient period were classified based on their Varna and Jati. Varna gives more information of the new born based on the type, order, class and colour. Each Varna gave a set of rules, customs, conduct and beliefs according to their Varna. Based on Varna and other Hindu texts society was divided into four principle categories namely

Brahmins were considered as the supreme in the society while the shudras were the least in the society. The reasoning and the insights of Varna can also be found in Manu Smriti. Manu Smriti is an ancient legal text of Vedic Period. The main aim of the Varna system to divide the society was to share the responsibilities of the society and also to preserve the purity of caste.

Brahmin: Brahmins were the supreme Varna in the society. The traditional occupation of the Brahmin was priest, teachers, scholars, Rishis.  During ancient times only Brahmins had the authority and right to learn Vedas and recite  Vedas. The earlier references to Brahmin were in Purusha sukta. Also the Dharmasutras and Dharmashastras give a detailed explanation about the role and duties of Brahmin.

Kshatriya: They were the second highest in the four varnas of the society. They were the military and ruling class of the society. Kshatriyas is a Sanskrit word derived from kstra which means dominion, power and government.  Their primary duty was to protect their territory and defend the people of the territory from any possible attack. Kshatriyas were allowed to marry women from all the four Varnas with mutual consent.

Vaishyas:  Vaishyas were the third most important in the four Varnas. They were the agriculturists, traders and money lenders. The important occupation of Vaishyas was the cattle rearing. Usually Vaishyas would work in close coordination with the administrators of the kingdom to implement, and upgrade the lifestyle of the people in the state.

Shudras: They were the lowest of the four varnas. The word Shudra appeared in Rig Veda and also found in Manu smriti and Arthashastra. Shudras would help the priest Brahmin in their ashrams, Kshatriyas in the princely state, and Vaishyas in their commercial work. Shudra men were allowed to marry women only from Shudra caste and hence were barred from marrying from any other castes. Traditionally Shudras were peasants and artisans.

There is no particular definition for jati. It can be said that Jati refers to regional groups like clans, tribes and communities. There are thousands of Jatis in all religions like Hinduism, Jainism, Islam and also among tribal group. Jati provides identity, security and status and historically marriage would take place only within the same jati.

There is no mention about the practice of untouchability in the Vedic texts. However it is believed that untouchability was first mentioned in Dharmashastras. It is said in the texts that untouchables were not considered as part of the Varna system because of the heinous crimes done by them.

This was not the lower castes as it was not considered as any caste. The untouchables were considered so impure that anyone touching them would also become untouchable and had to take bath before even entering their house. They were not allowed to enter any public places like temples, parks or even schools.

The caste system probably could have had its origin during the Indo Aryan period. The Vedas are the ancient scriptures which have hymns, philosophies and ritual performance were written in Sanskrit. Vedic prayers were so sacred and pure that a person of lower caste was not allowed to recite or even to listen to these prayers.

During the later Vedic period the caste system became more rigid. The shudras were made to do mean jobs. However, it is important to note that there is no mention of untouchability in any of these texts in ancient India. These texts also do not mention that shudras should not enter temples or any other sacred places.

It can be said that the main purpose of the caste system which started in Vedic period was to decongest society and to divide the work among the people. The caste system became more rigid in the later Vedic period. Brahmins became the superior power in the society. Even marriages among different castes were barred. The shudras started to live an isolated life in the society.

Further the caste system became  more rigid giving more importance and prominence to Brahmins. The kshatriyas who were the warrior class became more powerful. Restrictions and punishments were imposed for inter caste marriage. A number of sub castes emerged based on the occupations. The caste system was made with an intention to divide the work among the people and for the economic growth of the country but however it became a hindrance and caused a lot of problems. Many sub castes slowly evolved thus dividing the society.

With the emergence of new religions like Buddhism, Jainism casteism lost its sheen to some extent. King Ashoka himself embraced Buddhism after the Kalinga war. Even now casteism is present and many political parties are taking advantage of these castes.

Please share your thoughts with us by clicking the link here