Chalcolithic age can be considered as a transition period between Neolithic age and Bronze Age. This is the first metal age where metals like copper and its alloy bronze were discovered.  As the name itself indicates, in this period both metal and stone were used for making tools vessels, for day to day life. The important sites of this age are of Indus Valley sites.

The Chalcolithic culture represented the farming culture that existed during 2000-700 B.C. People of Chalcolithic were not hunter gatherer rather they were doing farming hunting, fishing, cattle rearing, other animals that were reared were sheep, goat, buffalo and pig. Later these animals were killed for food. 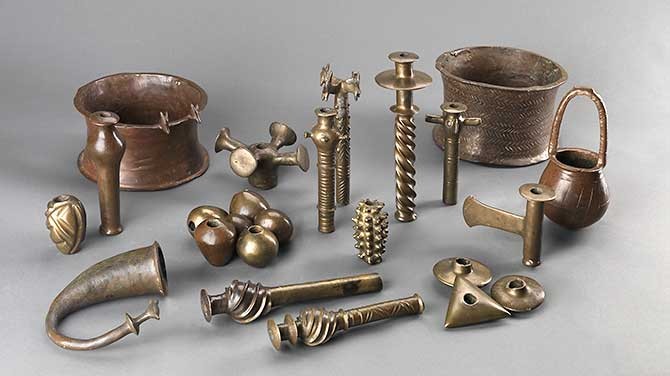 The settlements at Kayatha and Eran in Madhya Pradesh and Inamgaon in western Maharashtra were fortified. No plough or hoe has been found at Chalcolithic sites. The rate of infant mortality was very high.

The transition period from stone to metal was very slow and long. There was also an over lapping period of both stone and metals. The Chalcolithic period produced a wonderful civilisation during Indus Valley Civilisation.

It is believed that around 6000 BC smelting of copper had started which was used for the manufacture of tools. Later lead and tin and even bronze were used for the invention of wheels and other tools.

Crops and Occupation in Chalcolithic age

Hunting was most important occupation of people during Chalcolithic period. Cotton was also grown in black soil. Farmers used domestic animals like sheep, goat and cattle for farming and also for hunting.

Crops and houses in chalcolithic Age:

Different crops were grown. Rice was the main crop grown in Inamgaon while bajra, millers, ragi, wheat was also cultivated.  Fish and meat was an important diet of the people.

The people of Chalcolithic age were expert coppersmiths, Ivory carvers, limestone carvers and terracotta artisans. Most mud houses with single room are found. Rich people had large mud houses with 5 rooms, 4 rectangular and 1 circular in centre of the settlement are found.

Since these people believed in life after death, the dead were buried in their houses in north south direction along with pot food items. Different cultures that prevailed in this age were Jorwe culture, Malwa culture.

Female figurines of clay show that they prayed many female goddesses. This can be reported from Inamgaon and Nevasa. Bull was also worshipped at Kayatha.

Not much cultivation was done due to the presence of black soil. In India we can see Chalcolithic sites in south eastern Rajasthan, western part of Madhya Pradesh and Maharashtra and south and east India.

Jowre culture which was existed from 1400- 700B.C., mainly found in Vidharbha and coastal region of Konkani in Jowre, Navasa and Daimabad.   During this culture people lived in mud houses and used weapons like blade made of stone

Ahar culture was between 2100-1500B.C. It is also known as Banas culture. It is found on the banks of Ahar River of southeastern Rajasthan in India. The settlement was found in Ahar and Gilund in South Eastern Rajasthan. Ahar culture flourished predominantly in the Mewar region of Rajasthan, on the eastern side of the Aravallis, and in undulating rocky plateaus and plains along the Banas River and its tributaries.

More than 90 sites of Ahar culture have been identified so far. The early Ahar culture can be noticed only in Balathal. The houses were built in mud and mud bricks. Most of the crops that were cultivated during this period was rice, wheat, barley and jowar.

The distinctive feature of Ahar culture is the making of  black and Red ware along with dotted designs painted in white pigment.

Kayatha culture was present from 1700- 1200B.C. Settlements of Kayatha culture were mostly located on the banks of Chambal River and its tributaries. They were only a few in number and relatively small in size and the biggest may not be over two hectares.

Use of both copper and stone were found during this period. People lived in small huts with rammed floors with thatched roofs. Some of the important crops were barley and wheat.

Malwa Culture: It existed in the Malwa region of central India and parts of Maharashtra. It existed between 1600-1300 BCE.

The prominent feature of this culture is the dominance on agriculture. People cultivated wheat, barley, legumes, rice and domesticated cattle sheep, pigs and goat.  During this period the houses were built in haphazard manner.

Most of the houses were round huts. Pottery was done with red and orange color with geometric, floral, animal designs on it. Some of the important sites include Inamgaon, Kayatha, Nagda, Vidhisha and Mandsaur.

The Chalcolithic age is followed by Iron Age. Iron is frequently referred to in the Vedas. The Iron Age of the southern peninsula is often related to Megalithic Burials. Megalith means Large Stone.

The burial pits were covered with these stones. Such graves are extensively found in South India. Some of the important megalithic sites are Hallur and Maski in Karnataka, Nagarjunakonda in Andhra Pradesh and Adichchanallur in Tamil Nadu. Black and red pottery, iron artefacts such as hoes and sickles and small weapons were found in the burial pits. The Harappan Civilization succeeded the Prehistoric India.

Pottery and Lifestyle during Chalcolithic period

The Chalcolithic period is where the tools were made using metals like copper and also like bronze, tin which were melted at very low temperature.

The economy during this period was mainly from hunting, farming and fishing. Bricks were used extensively during Chalcolithic period.  The walls of the house were built from mud and the houses that were built were either circular or rectangular in shape.

People lived in groups and near the rivers. This helped them for farming and hunting as well as taking care of one another. The buildings had different rooms which were used to do different functions.

Different types of potteries were used by the people during Chalcolithic period. They usually used earthen ware painted pottery usually black or red.

Painted pottery is one of the most distinguishing features of Chalcolithic culture. Some of the most commonly used pottery forms were stemmed cups, big storage jars, Spouted basins and spoons, bowls and Spouted vases.

People of Ahar culture made pottery with black and red that was decorated all around with white designs. But the kayatha culture used strong red coloured pottery with designs made from chocolate color.

Some of the polished stone tools that were used during this period are axes, chisel, knives, fishhooks, pins, rods. People also worn jewellery made of semi precious stones like chalcedony, jasper and carnelian.

Another important feature of the Chalcolithic period was the use of the burials for the dead. People buried the dead in the north South direction in the floor of their houses along with the utensils used by them.

In Navas children were buried by covering their neck with necklaces.  Burials varied from one group to another group like the single interments to jar burials to small box shaped. 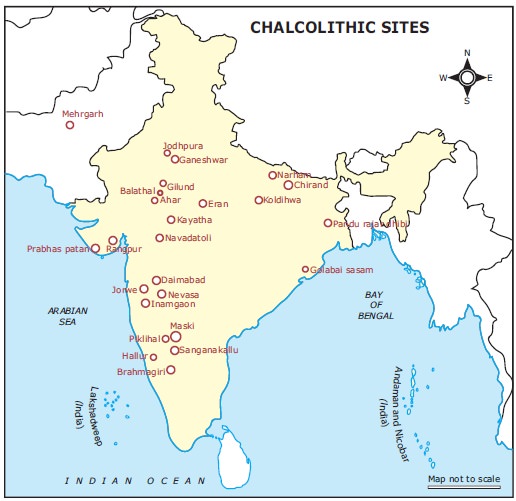 Some of the major Chalcolithic sites in India are written under.

The decline of this period shows that during this period lot of epidemics like Cholera, Malaria etc. The unhygienic conditions must have made epidemics broke out as we can see many children buried. People did not drink milk of animals as they thought it was for animals.

Please share your thoughts by clicking the link here