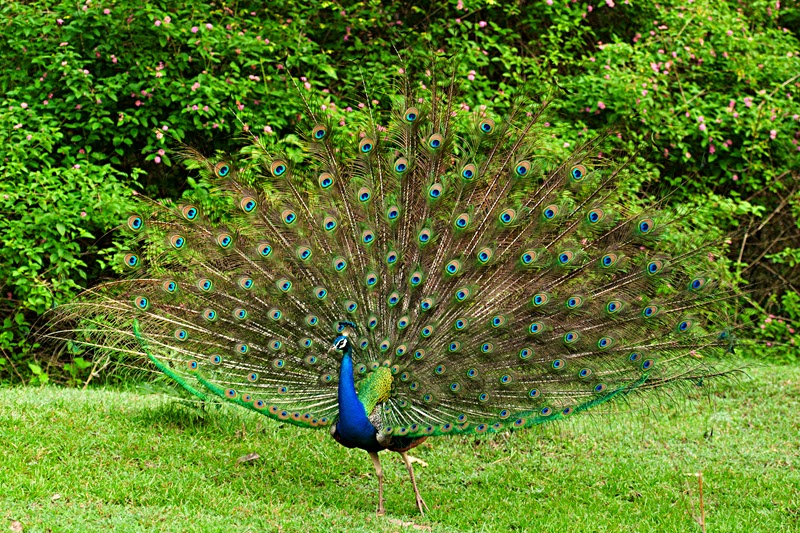 The National bird and the National flower of any country show the richness of the country’s flora and fauna. The peacock was chosen based on its beauty and unique qualities it possess. Usually a National bird or flower or animal is selected based on its presence in the history and during the ancient times.

The national bird gets a special status and respect of that country. The Indian National Bird Peafowl draws attention of the people for its beautiful feathers. The peacock is present since ancient times and in Hindu texts. Lord Krishna holds the peacock feather on his head. Peacock is also domesticated and can be kept in gardens and even in farming places. 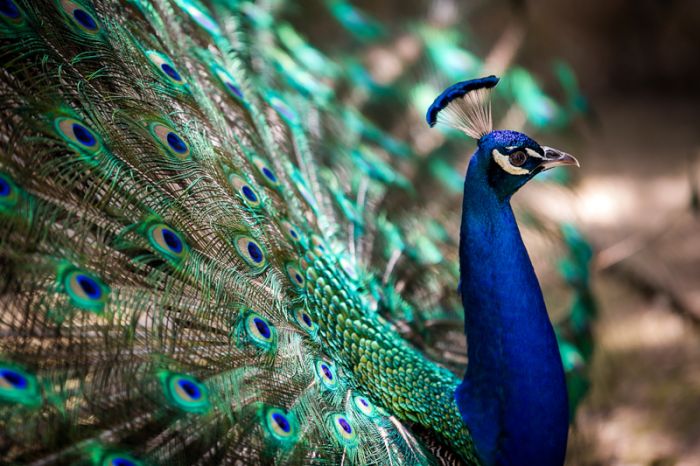 A peacock also known as Mayura in Sanskrit has held a respectful place in ancient Hindu mythology and also has been depicted in temple art, poetry, folk music and dance. According to Buddhists philosophy, the peacock represents wisdom. Peacock feathers and motifs are used in various mythological stories.

Physical appearance and description of National Bird of India 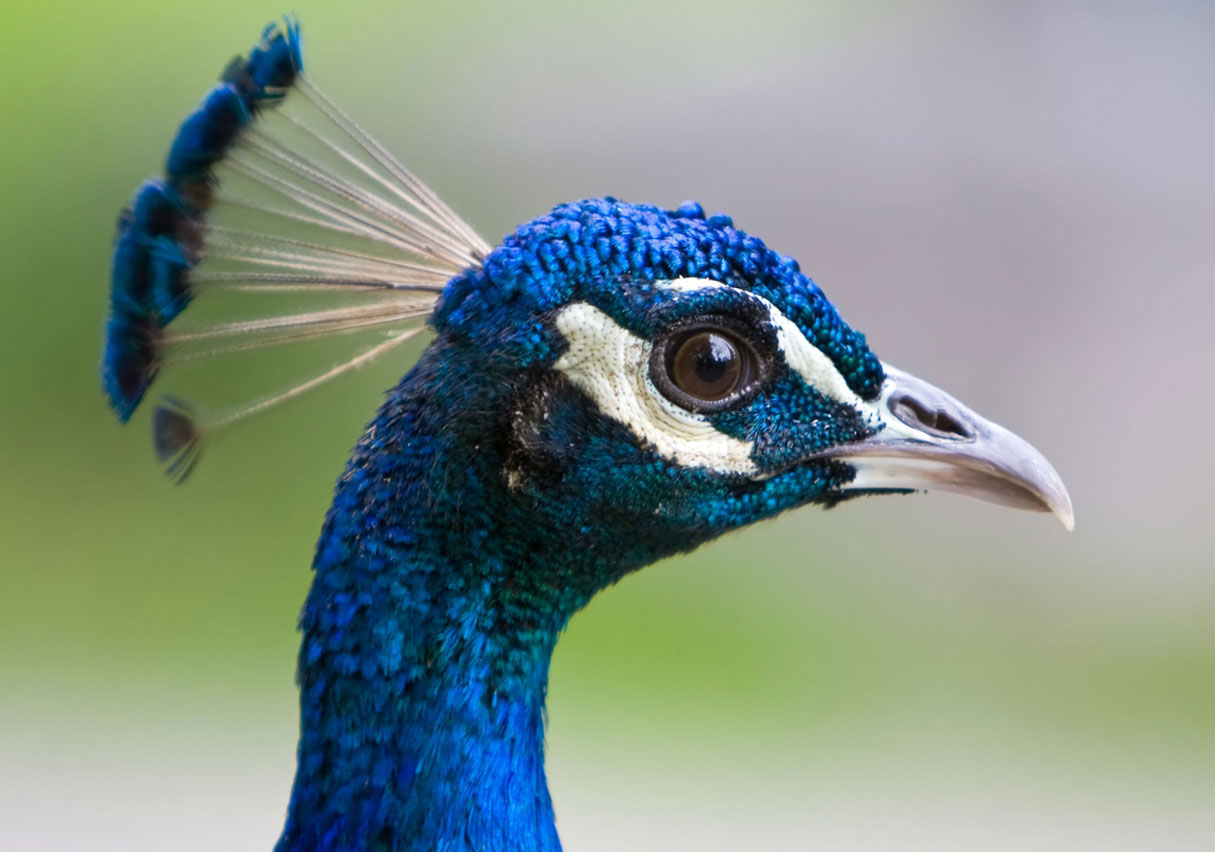 The Indian peafowl or peacock is a beautiful bright and rich coloured bird is a native of Indian subcontinent.  The Peacock represents male peafowl and it belongs to pheasant family. There are mainly two species of Peafowl they are the Indian Peafowl and Green peafowl. These birds are native of Asia. The scientific classification of peacock is as follows

The male bird of the species which is known as Peacock is the most beautiful bird with colourful long tail. The tail has beautiful eyespots and when the feathers or the tail is opened it is truly a feast to the eyes of the human beings.

When they open the feathers and dance it is just not possible to explain in words. The male peacock which is blue in colour has a stunning beautiful appearance. This colourful swan shaped bird has a fan shaped feathers on its head and a white patch below the eye.

The feathers on the upper part of the tail have eyespots all over it and the feathers are also known as trains because of its length and size and weigh an average of 5 kg. Even though the feathers of the peacock are so heavy and long, still peacocks are capable to fly. Peahens don’t have train or the tail.

It takes close to 4 years for the train to fully grow in size. A fully grown peacock can be between 195-225 cm and weighs around 4-6 kg. The back side of the tail are blackish and glossy in colour. The Indian peacock thighs are buff in colour and the male peacocks has a stimulus on the leg which is above the hind toe. At the sides of the head the peacock has greenish blue feathers. 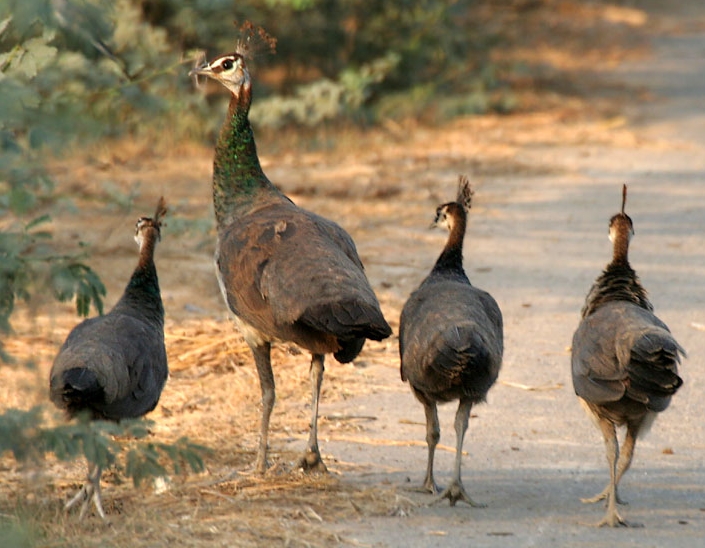 The female peahens doesn't have a train or tail and are much smaller in size as compared to peacocks. The female is brownish in colour and has a crest which is brown in colour.

The lower part of the neck is metallic green in colour and the feathers on the chest are dark brown with a green tinge in colour. It can be said that young males whose tail has not yet grown looks similar to female peahens.

The peahen grows up to a length of 0.95 m and weighs 3-4 kg. The Indian peafowl mainly lives in an open land or any farm land and eats and search for berries, grains and also sometimes they prey on snakes, lizards and small rodents.

It is believed that when a peacock makes a loud noise in the forest that means the presence of predator near the place. The bird finds a place both in Hindu and Greek Mythology.

Distribution and Habitat of Indian Peacock

The Indian peafowl is a resident of Indian subcontinent and is also found in countries like Sri Lanka, Bangladesh, Myanmar, Burma and Nepal. The bird was also introduced to countries like Australia, Indonesia, Europe, America, Croatia and Canada. It is believed that peacock was introduced to Europe by Alexander while other says that peacock was present in Athens since 450 BC and may even be present much earlier. They feed and nest on the ground but move around on the tree top.

Peacocks are generally present in dry deciduous forest areas are found even around human habitations and are found near water storing places. They are usually found in low altitude of 1800m from the sea level.

Peacock is an omnivore’s bird and feeds on seeds, insects, fruits and reptiles. Some farmers keep peacock in their farms so that the peacocks eat away the insects and also small snakes. Around the cultivation ground they feed on groundnuts, tomato, paddy and even sometimes banana. They are also seen feeding on seeds in large garden and near human habitation.

The peacocks are polygamous in nature and the breeding season starts during monsoon season and also January to March in Sri Lanka and June in North India. The peafowl reaches the sexual maturity at the age of around 2-3 years. Peahens lays around 5-6 brownish coloured eggs from April to September. The eggs are laid in the nest which is on the ground covered with grass and is a shallow hole like to protect the eggs from the predators

The eggs usually take around 29 days to hatch. The hatched chicks are taken care by mother for around 10 weeks by feeding the food from the beak. The mother peahen teaches all the necessary life skills for the chicks.

Behaviour of National Bird of India

The Indian Peafowl move in groups and after the breeding season the flocks would consists of only females and the young ones in the group. The move freely in the open space during early part of the day that is morning and in the afternoon they rest in shade and at night they rest on the tree top. 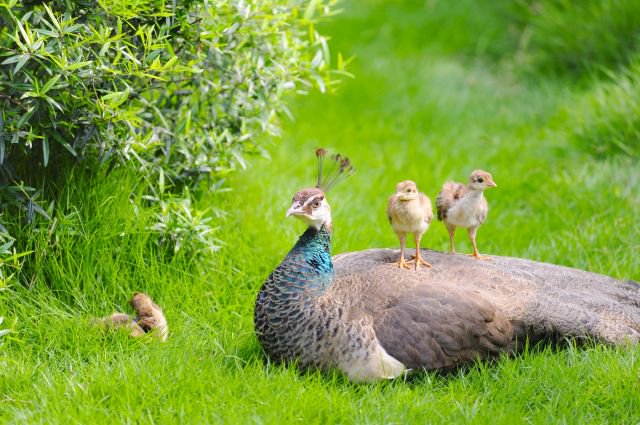 The train starts developing when it is around two years old and is fully developed when the peafowl attains an age of around 4 years. The mating season varies from place to place. In south India it is from January to March and in Northern parts of India it is from July to September. The Peacock starts dancing and open the train to attract the female partner during mating period. It also makes loud calls during the breeding season.

Threats and Conservation of Indian Peacock

There is an increased threat to peafowl in India for their meat and feathers. The beautiful feathers are used for making many decorative items at the cost of the life of peacock. They are also hunted and killed for their meat and other parts of the body. When the farmers put pesticides on the seeds and if by chance the peafowls eat those seeds then they are killed by those poisonous seeds.

Some times a peafowl can be an advantage or at disadvantage near the farm. Some peafowls may damage all the crops causing nuisance to the farmers but also may help in eating the insects and grasshoppers. Hunting of any bird or animal is illegal especially hunting of National bird is illegal and punishable under law.