Design of National Flag of India:

National flag is a very important national symbol of any country. The flag makes one feel proud of their country. National flag of India is horizontal rectangular in shape with Indian saffron, white and green in colour. The flag has Ashoka chakra which is Navy blue in colour and has 24 spokes. The Ashoka chakra is at the centre of the flag. Saffron is at the top of the flag followed by white at the centre and Indian green at the bottom. The present flag was accepted and adopted in a meeting of the constituent assembly held on 22nd July 1947.

Later the flag became the official flag after India got independence on 15th August 1947. The flag should be in the 2:3 ratio and should be made from Khadi a special type of hand spun cotton cloth or silk. The size of Ashoka Chakra is not mentioned in the Flag code of India but however it has 24 spokes that should be evenly spaced.

According to Flag code and ISI Ashoka Chakra should be painted or printed on both sides of the flag. The RGB values to the colours of the Indian National flag are India saffron #FF9933, white #FFFFFF, India green #138808, and navy blue #000080. 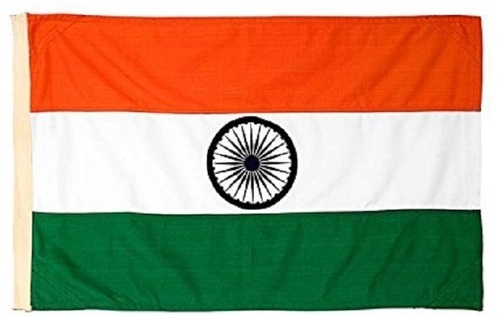 In India flag is also known as tricolour or tiranga which was designed by Pingali Venkayya. The manufacture of the flag has to follow certain rules, procedure and specifications laid down by Bureau of Indian Standards.

Khadi Development and Village Industries Commission hold the right to manufacture the flag it further allocates and distribute to its regional groups. In 2009 the Karnataka Khadi Gramodyoga Samyukta Sangha is the sole manufacturer of the flag.  National Flag has gone through various changes before the present flag became the official flag of India.

History and Evolution of National Flag of India 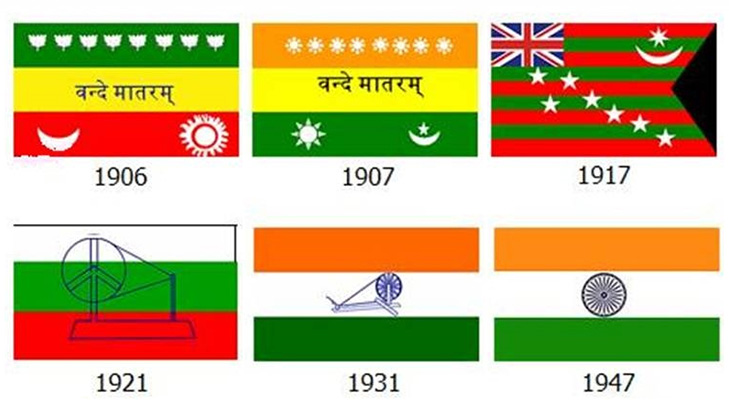 It is very interesting to understand the various changes that our Indian National flag went through before independence. Before the Sepoy mutiny the princely states had their own flag which resulted in many flags for India.

The flag was red in colour with Union Flag at the Upper left hand corner along with a star of India enclosed by the crown at the middle of the flag.

After the partition of Bengal in the year 1905, the Indian freedom fighters sought for a single flag which represented to unite people of different castes and races. The first National flag in India is said have been hoisted on August 7th 1906 at Parsee Bagan square which is in Kolkata now. The flag had three colours of green at the top, yellow at the middle and red at the bottom.

The tricolour flag also had 8 white lotuses on the upper green colour band, Vande Mataram slogan on the yellow band at the centre and a crescent moon and sun at the bottom red band. The white eight lotuses represented the eight provinces in India.

Later in the year 1907, the flag was slightly modified and was hoisted by Madam Bhikaji Cama and her band of exiled revolutionaries. The flag was quiet similar to the older flag except the present flag had only 7 lotuses instead of 8.

In the year 1916, Pingali Venkayya gave many designs to the development of flag. Dr Annie Besant and Lokmanya Tilak hoisted a new flag during the home rule movement in the year 1917.

This flag was little different compared to the older one. It had five red and four green horizontal strips which was arranged alternatively. It had seven stars in the Saptarishi configuration and at the left hand top corner was the Union Jack. There was also a white crescent and star in one corner of the flag.

The flag agitation movement took a strong voice and to preserve the honour for the national flag became an integral part of the freedom struggle movement. Motilal Nehru also praised and said Swaraj flag as a symbol for national unity and to get freedom. Thus flag became an important part in the freedom fight for independence. A resolution was passed in the year 1931 to make the flag as the official flag of congress.

Before India got its independence a constituent assembly was setup and a resolution was passed on 23rd July 1947 to adopt Swaraj Flag as the National flag with little changes. The spinning wheel was replaced by Ashoka Chakra and the colours were saffron at the top, white at the centre and Indian green at the bottom. The resolution was accepted unanimously and the flag became the national flag of Independent India. 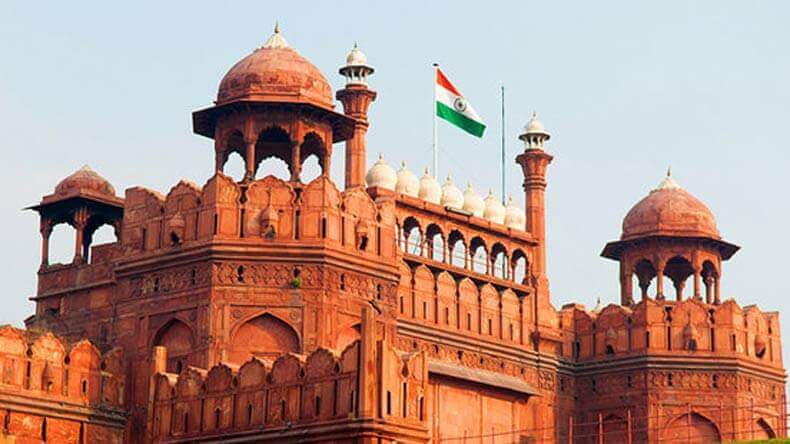 Mahatma Gandhi has said the following quotes on Flag "A flag is a necessity for all nations. Millions have died for it. It is no doubt a kind of idolatry which would be a sin to destroy. For, a flag represents an ideal.” the colours in the Indian flag has deep meaning in  the saffron stands for sacrifice and renunciation, white stands for peace and green stands for courage and immortality.

The Ashoka Chakra stands for the law of Dharma. The wheel further depicts that Life keeps moving like the wheel and never stands in stagnation. Sarvepalli Radhakrishnan further explained the Indian National flag in the following words “Bhagwa or the saffron colour denotes renunciation or disinterestedness.

Our leaders must be indifferent to material gains and dedicate themselves to their work. The white in the centre is light, the path of truth to guide our conduct. The green shows our relation to (the) soil, our relation to the plant life here, on which all other life depends.

The "Ashoka Chakra" in the centre of the white is the wheel of the law of dharma. Truth or satya, dharma or virtue ought to be the controlling principle of those who work under this flag. Again, the wheel denotes motion.

There is death in stagnation. There is life in movement. India should no more resist change, it must move and go forward. The wheel represents the dynamism of a peaceful change”

Protocol and Display of National  Flag of India 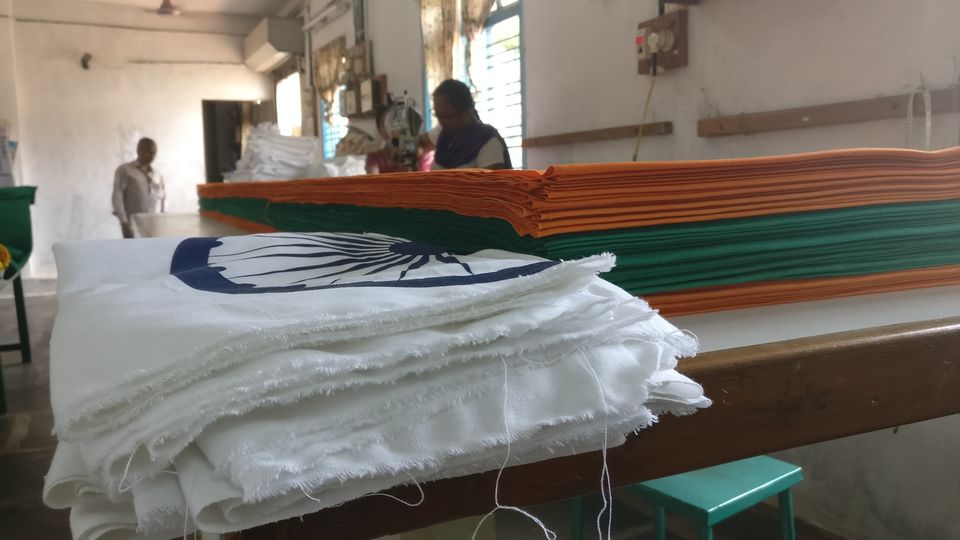 India National Flag should be treated with great respect. The flag cannot be displayed everywhere and there are certain protocol that should be followed while hoisting the flag.

The flag should always be hoisted between sunrise and sunset irrespective of weather conditions.

The flag should never be hoisted upside down and the saffron strip should always be on the top. It is considered as insult to flag if is it hoisted or displayed in a dirty place or on a dirty flag poles.

Prior to the amendment of the Flag code the private citizens were permitted to hoist the flag only during the National festivals like the Independence Day and the Republic day. However after the amendment of the flag code in the year 2002 private citizens were allowed to hoist the flag on any day through out the year on a condition that they preserve the dignity, pride, honour and respect to the flag.

The flag should always be hoisted to the right of the audience. When the flag is carried in procession or parade or with any other flag then it should be on the marching right or alone or at the centre.

Disposal of the damaged flag is done by burning or by any other method by upholding the dignity of the flag.

The flag is draped to the coffins of the military and para military force with saffron colour is towards the head. The flag should not be lowered in the grave or burnt in the pyre.

The Indian National Flag cannot be manufactured by everyone and at everywhere. The design and the manufacturing process are regulated by the three documents that are issued by the Bureau of Indian standards. Flag can be manufactured only by using Khadi cotton or silk. The guidelines include the size, colour, brightness, thread count and Hemp cordage. The defect in the manufacturing is punishable with fine or Jail.

Khadi should only be the material to be used for the manufacturing of flag any other material used violates the guidelines and is punishable under law. Karnataka Khadi Gramodyoga Samyukta Sangha which is present in Hubli Karnataka is only authorised dealer for production and supply unit in India. Permission to manufacture should be obtained from Khadi Development and Village Industries Commission even though the BIS have the power to cancel the licence and permission to manufacture.