One of the most important and significant dynasties that existed before Christ is the Mauryan Empire. The last Nanda ruler Dhana Nanda was arrogant and unpopular due to his strict tax rules.

Mauryan art is one of the most significant contributions given to the society by the Mauryan rulers. Some of them are famous even to this time. 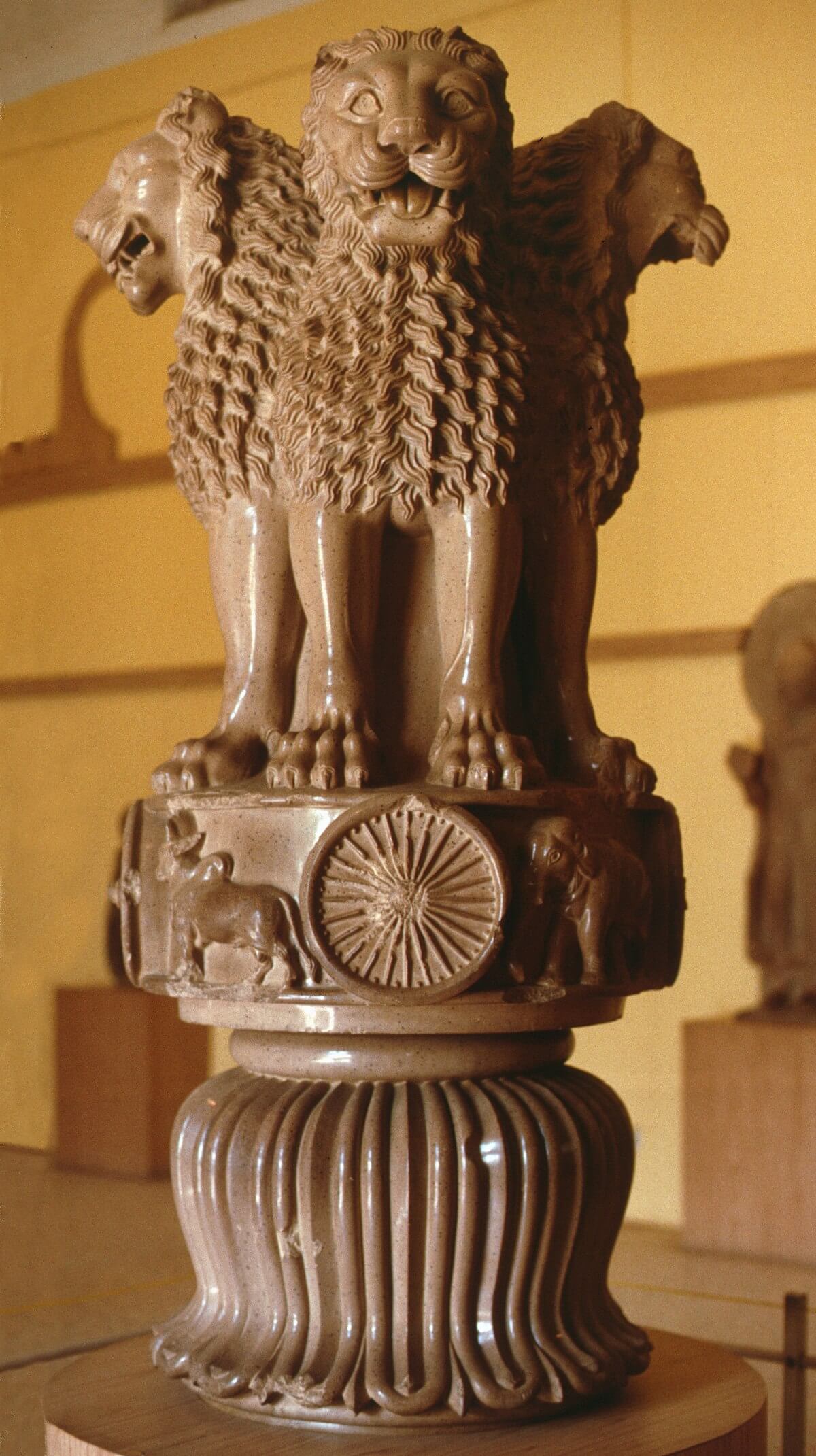 One of the most important characteristics of Mauryan art and architecture is the Mauryan Polish. It gives a smooth and shiny finish to the stone material. It can be found in Ashoka Pillars.

The Mauryan art included Stupas, Viharas, Palaces, Pottery, Pillars, Caves and sculptures. The pillars of the Mauryan period were quite different to the Achamenian empire. The Mauryan pillars are rock cut pillars which display the carver’s skill.

The Achamenian pillars were constructed in pieces by a mason. The Mauryan pillar found in Sarnath which is popularly known as Lion Capital is one of the best examples of Mauryan art. It is the national emblem of India.

Religions like Buddhism and Jainism gained a lot of attention during the Mauryan period. These religions had a lot of influence on the Mauryan art and architecture. Constructions of Stupas, Viharas, caves became part of Buddhists traditions. It is believed that Ashoka built close to 84,000 stupas across India. The Sanchi stupa being the most famous one. 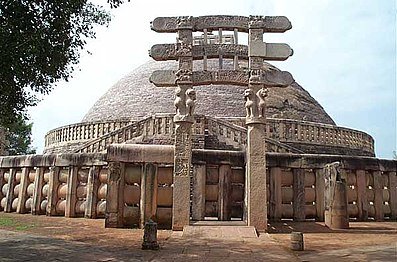 Some of the most significant monuments that are world famous even to this date are the royal palace at Pataliputra, monolithic rail at Sarnath, the four pillars at Bodhgaya, Sanchi Stupa, the Chaitya halls in Barbara caves, pillars of Ashoka and the lion capital of Ashoka which features four lions set back-to-back on a drum shaped abacus.

The sides of the abacus are carved with wheels and four animals of a lion, an elephant, a bull and a galloping horse and many more.

It is argued by many scholars that the Mauryan art was greatly influenced by Greek and Persian art.

Sculptures and Pillars in Mauryan Art

It is believed that the Greek historian Meghasthanes described the royal palace at Pataliputra as one of the greatest creations of mankind.

Due to the popularity of Buddhism and Jainism a lot of stupas and viharas were built on a large scale. A large number of pillars erected by Ashoka throughout India have inscriptions engraved on Dhamma. Most of the pillars are erected in the Gangetic plains.

The pillars were usually made up of red or white sandstone which were taken from Mathura or hard sandstone with small black spots taken from Chunar region near Varanasi. At the top of the pillars were carved images of bull, lion, elephant etc. The carved figures were standing on a square or abacus which were decorated with lotus. 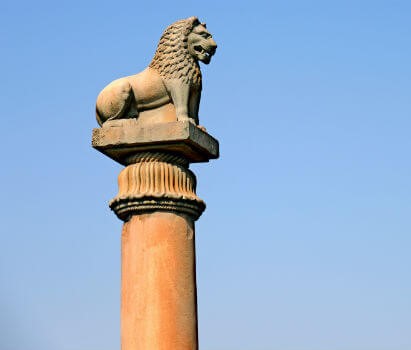 The pillars of Ashoka are the monolithic columns erected at many parts in India. Ashoka called these pillars as pillars of Dharma. These pillars are the important monumental architecture of India. Most of the pillars have Mauryan polish.

Looking at the uniformity of the pillars it can be said that they were all sculpted by craftsmen of the same region. Sarnath pillar is the most famous pillar. It symbolizes Dharmachakrapravartana( first sermon of Buddha).

The stone elephant at Dhauli must have been carved by the local craftsman. The image of the elephant looks quite imposing. Some of the other pillars with capital figures are found in Basarah-Bakhira, Lauriya Nandangarh and Rampurva in Bihar, Sankisa and Sarnath in Uttar Pradesh.

Shaft-a single piece stone which formed the base.

Capital- This was usually in lotus shape and was kept above the shaft.

Abacus- A rectangular base kept above capital.

Capital Figures- these were the figures of animals carved and kept on circular abacus.

Ashoka constructed many pillars. Out of that only few survived. Here is the list of all the pillars in India along with animal sculpture and edicts inscribed.

Rampurva, Champaran, Bihar. It has two columns. A Lion with pillar edicts I, II, III, IV, V, VI and bull without inscriptions.

Sarnath near Varanasi Four lions, Pillar Inscription, Schism Edict. This is the famous Lion Capital of Ashoka which is used as the national emblem of India.

Stupas and Viharas were constructed in large numbers due to the popularity of Buddhism and Jainism during the Mauryan period. Usually, stupas were constructed over the relics of Buddha at Rajagriha, Vaishali, Vethadipa, Kapilavastu, Allakappa, Kushinagar and Pippalvina.

However, there are more stupas constructed on the relics of Buddha at Avanti and Gandhara which were outside the Gangetic valley. Slowly brick and stone was introduced in Mauryan art.

The great stupa at Sanchi was built in bricks by Ashoka. It was later covered with stone and many new additions were made later during renovation.

Depiction of Buddha at the stupas: During the early stages Buddhas were represented through various symbols like footprints, lotus thrones and Chakras. Later on, Jataka stories which are the stories related to Buddha were portrayed on the railings and torans of the stupas.

Many figurines of folk god and goddess had been decorated to look like a doll and animal figures were probably used as toys for children. 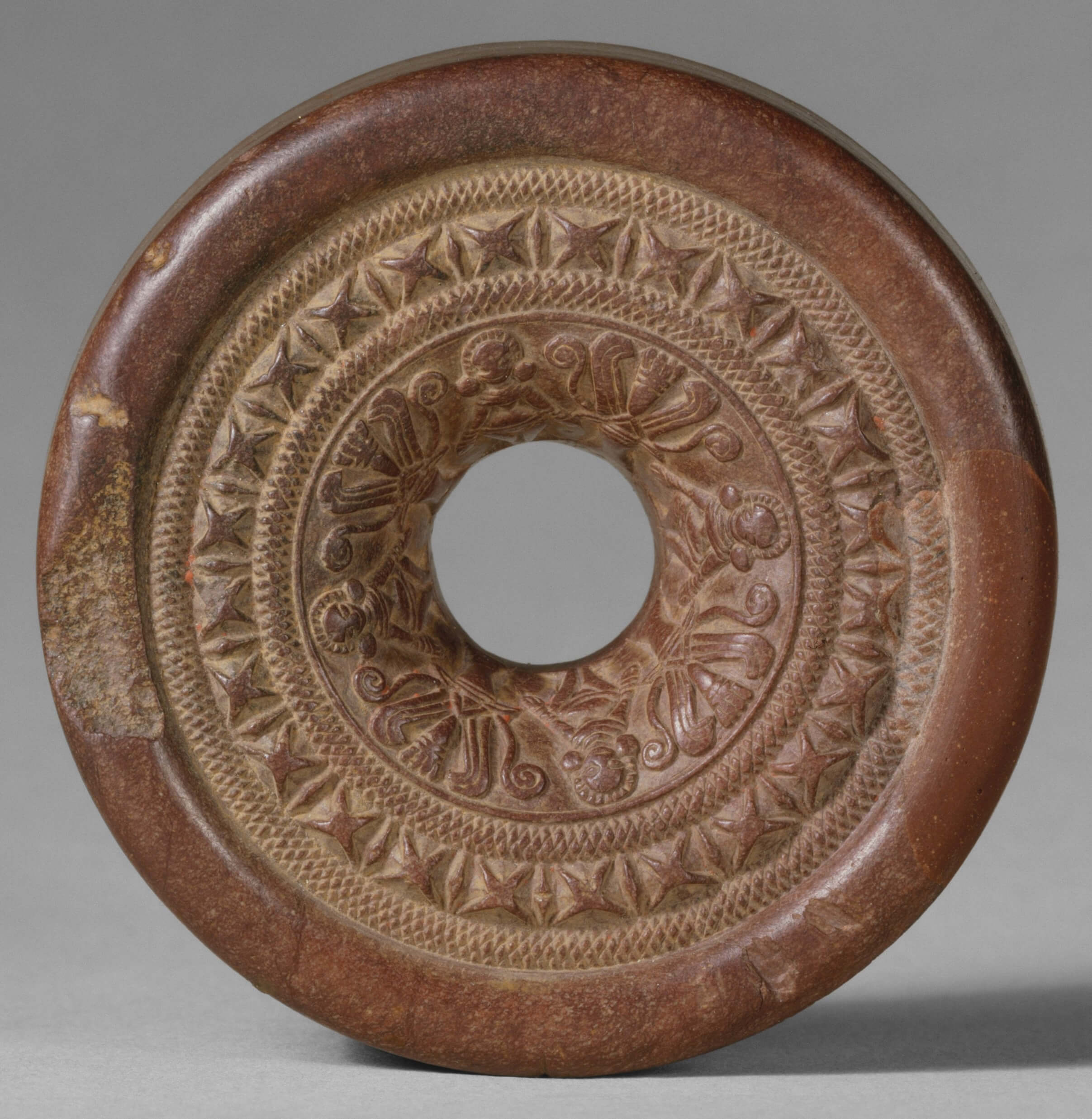 There are a large number of artifacts made from ringstone and disc stone that are found in various parts of North India. Ring stone artifacts are miniature sculptures made during the Mauryan period and later during the Shunga dynasty.

It is in round shape with a plain and flat bottom. The top portion would have beautiful carved designs. They generally have a diameter of 5 to 6 cm. The carvings would be of female figures, animals like lion, tiger and different varieties of trees.

Pottery during the Mauryan period had a highly polished and lustrous finish. The NBP ware was made of alluvial clay and was more expensive as compared to other wares. These kinds of pottery were found mostly in Ganges Valley. Kosambi and Pataliputra were the centers of North Black Polished Ware.

Later on, the silver punched coins with symbol of wheel and elephant became famous