The Elephant and the Mice Story

The Elephant and the Mice

Another classical Panchatantra story to learn and to understand the value of friendship. It is a classical example for “ a friend in need is a friend in deed”

Once upon a time in a small village there  lived a group of mice along with the villagers. Everyone in the village including the mice were living happily.  As  time passed, all the villagers started moving out of the village as there was scarcity of food and water in the village due to many natural calamities. 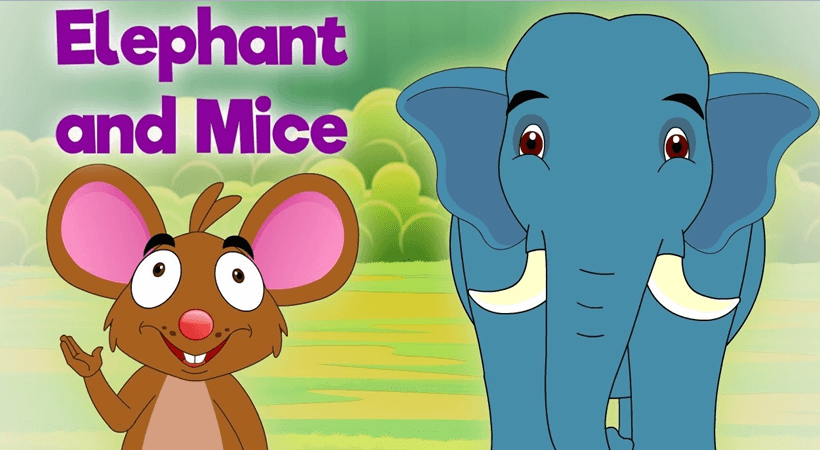 No one was left in the village except a group of mice. They decided to stay back in the village. The Mice started to live in the ruined houses and started enjoying each other. The natural vegetation of fruits and vegetables gave sufficient food for the mice to survive without any villagers.

Soon their numbers grew and the village turned into a city of mice. Several generations of the mice started living together. They  took care of each other and also celebrated all festivals together. It was a big family of mice.

There was a big freshwater lake next to the village and all the mouse family thoroughly enjoyed staying and eating in the village.  A herd of elephants was living happily in the forest. They were eating and drinking fresh fruits and fresh water from the huge river that passed in the forest.

Interesting- Read further the elephant and the mice

As the summer came the river got dry and there was no water for the animals in the forest. Many animals started to die due to summer and no water.

The herd of elephants which was living in the forest decided to move out in search of food and water.  The river in the forest had become dry due to the summer season.  The Queen Elephant asked her young elephants to go and search for a lake or pond with water. The elephants came back and said that there is a big lake next to the mice village. 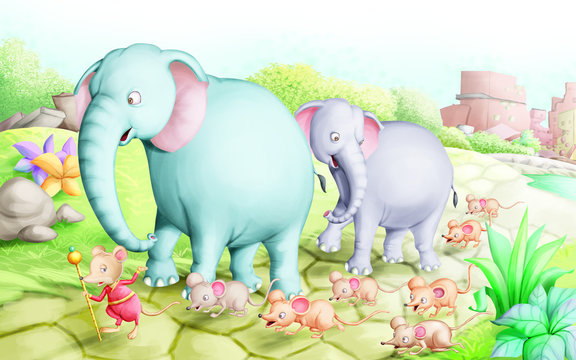 On hearing this all the elephants were very happy and decided to go near the lake. While rushing towards the lake to take a bath with excitement, many elephants did not notice the small mice all around in the village. Many mice were crushed under their feet. Many mice were killed while some were seriously injured.

Elephants had not done this purposely. The mice also feared that the elephants may again crush many mice while going back to the forest. So the old mouse  decided to go and narrate the whole incident to the Queen Elephant. They also decided to  request the Queen to take back  the herd of elephants in some other route.

The old mouse was very happy and said that the mice family will always be ready to help the elephant when required.

Months passed and both the elephants and the mice family lived happily in their respective places. One day a group of hunters came to the forest and trapped the elephants in a strong net. Poor elephants tried hard to take the net out but failed to do so.

The Queen Elephant  remembered what the old mouse had promised to help them. She asked one of the elephants to go and inform the mice family about our condition and ask them for help.

On listening to the elephant the old mouse summoned all the mice and at once went to the forest to help the herd of elephants who were trapped in a net.

The mice with their strong teeth cut the net and freed the elephants. The Queen Elephant thanked the old mouse and remembered his promise and set them free from the net. Both mice and elephants became good friends and enjoyed each other's company.

Always be kind to people as sometimes even a weak looking person can be of your help.