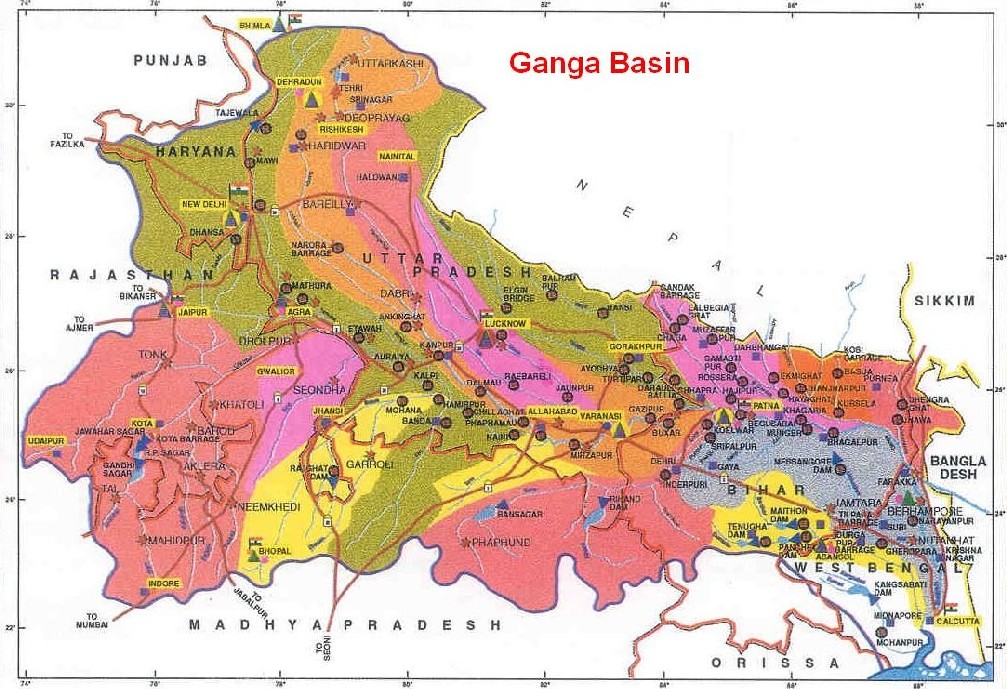 Ganga Basin:  Ganga basin is the part of the Ganga Brahmaputra basin draining around 1,086,000 square Kilometres.  A basin is an area of land drained by a river and its tributaries.   In India Ganga Basin is the largest basin. It covers India, Nepal, Tibet and Bangladesh covering an area of 1,086,000 Km2.

The Basin has different variety of places. It comprises of Snow Mountains & dense forest in Himalayas, semi arid valleys, sparsely forested Shivaliks hills and the most fertile plains of northern India. The central highlands present to the south of the fertile northern plains consist of mountains, hills and plateaus that are divided by valleys and river plains. The Gangetic plain is the most fertile plain of India. The soil present in the Ganga basin is loam, clay and combination of both. 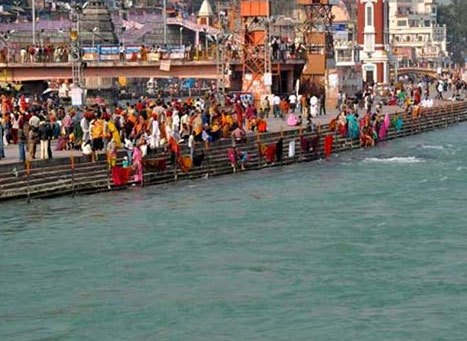 Ganga basin has many pilgrimage places of Hindus. Some of the important places that are situated on the banks of river Ganga are Haridwar, Rishikesh, Kanpur, Allahabad, Varanasi, Patna, Bhagalpur etc.

These are the important touristic places as well. Haridwar is famous for the Ganga evening Aarti.  ‘Aarti’ is a form of worshiping God with flowers and oil lights.  From time immemorial these places have been influencing the lives of people in the subcontinent.

As this is one of the largest and fertile plain, many kingdoms/ dynasties have flourished on these plains.  Trade as well as culture also blossomed on these plains as the plains provided much needed resources for agriculture and thereby staple source of income to citizens.

The climatic conditions of the basin vary from place to place. The Gangetic plains usually have extreme seasons. May and June experience high temperatures. Monsoon is usually from July till September. And during winters snow follow occurs around the Himalayas and nearby areas.

The precipitation is high in monsoon season. Since the soil is very fertile agriculture is the main occupation. Wheat, paddy, maize, Shorgum, millets are the main crops grown. Some of the cash crops like sugarcane and jute are also grown. In areas like Bihar and Assam silk is cultivated. Assam is also famous for its tea plantations.

Some of the trees that are present are coniferous trees like pine, deodar and fir along with teak, sal and peepal. One can get to see a variety of wild life in this basin. Elephants, Bengal tiger, monkeys, alligator, crocodiles etc are some of the common animals in Ganga basin. 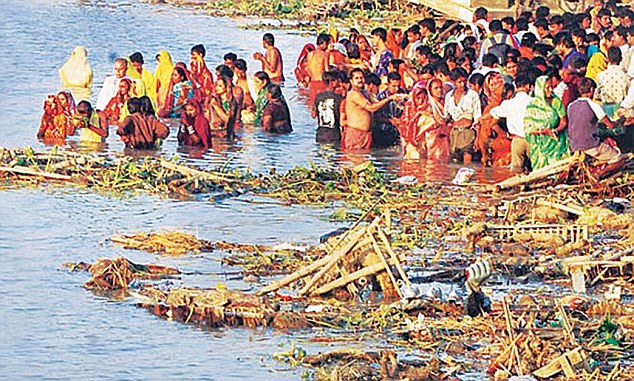 Due to urbanisation and various developmental works in the basin, it has polluted the rivers and impacted the fertility of the soil.  Construction of many dams across the river Ganges has rendered the great river now into a stream of raw sewage in many stretches especially close big cities.

Some of the important dams constructed are Gandhi Sagar Dam, Rana Pratap dam, Ghandak Barrage and many more. The industrial wastes which are thrown in to the river are causing severe pollution of Ganga River and its tributaries.

Close to 500 million people reside in the basin. This is another reason for causing severe pollution in the river and river basins. The Ganga river basin has many tributaries that drain the Himalayas and Vindhya ranges.

The River Ganga which is very scared river to the Indians especially among Hindus originates from Gangotri Glacier in the Himalayas. The elevation of the glacier is 7,010m. It is known by the name of Bhagirathi at Glacier. Bhagirathi joins river Alakananda at Devprayag to be called as Ganga.

The main tributaries of Ganga river that flow from Himalayas are Yamuna, Ghaghara, Ghandak and Kosi.River Ganga is getting polluted because people are dumping the wastes and even the dead bodies in the river. Various projects have come up to clean the river.