Timings: All days from sunrise to sunset

When was it built: It was commissioned in the 3rd century BCE. But many additions and expansions are done in different periods

Location:  It is located 46 km northeast of Bhopal, Madhya Pradesh

Who built:  Commissioned by Emperor Ashoka of Mauryan dynasty.

The great stupa at Sanchi is a very important Buddhist monument located in the state of Madhya Pradesh in India. It was commissioned in the 3rd century BCE by the great Emperor Ashoka of the Mauryan Dynasty.

It is one of the oldest structures in India and reflects Buddhists art and architecture. It was declared as UNESCO world Heritage site in 1989 and is considered as one of the best stupas in India.  It was earlier commissioned by Emperor Ashoka. Sanchi is the birthplace of Emperor Ashoka's wife Devi and also Sanchi was the venue for their wedding.

History and Details of Sanchi Stupa 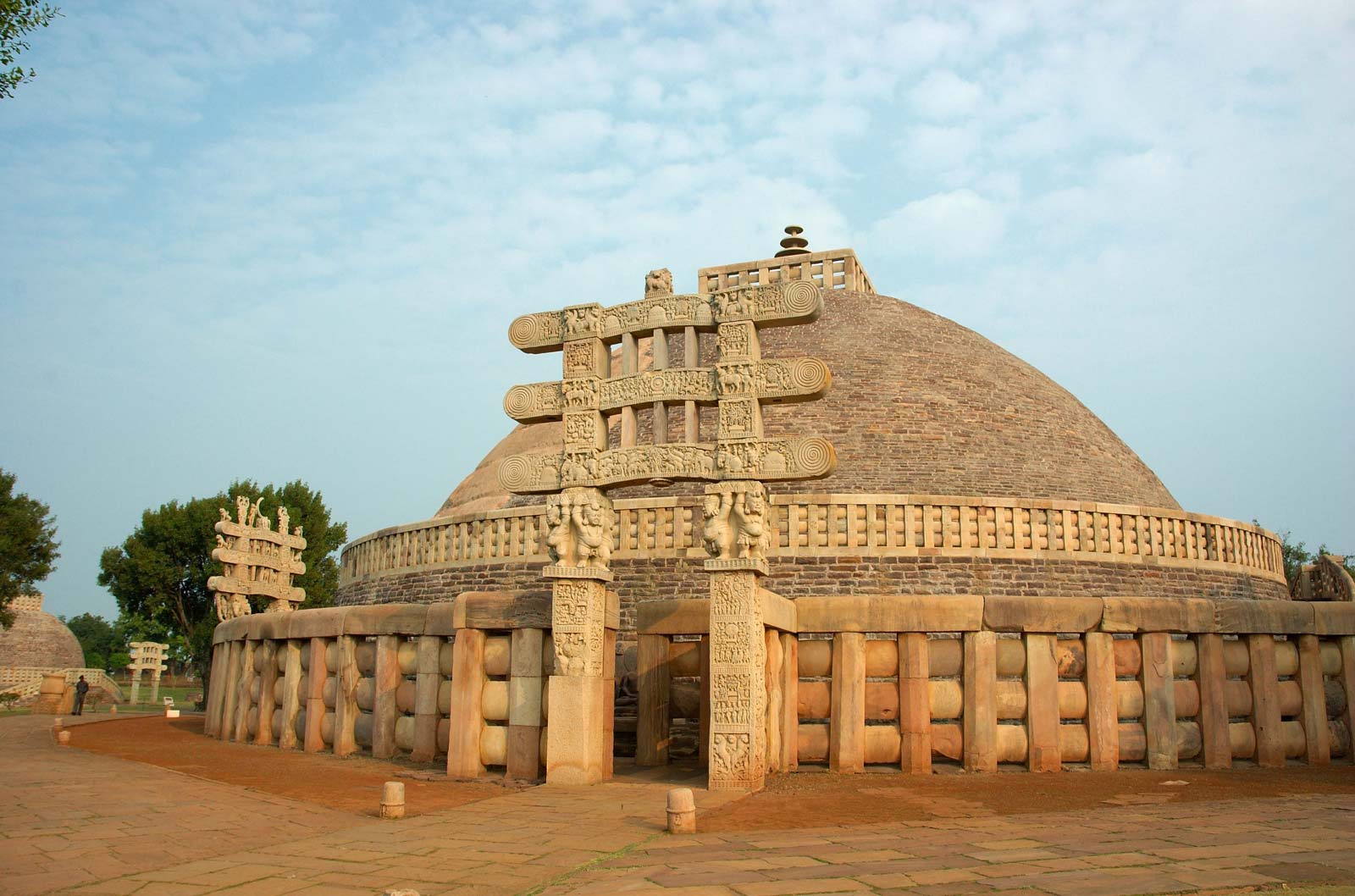 The great stupa  at Sanchi is a huge hemispherical dome with a height of 54 ft has a central chamber where relics of Buddha are placed. The great stupa at Sanchi with four thoranas on the gateway in four directions is one of the main attractions in Sanchi  great stupa. However this was added in the later period in the first century BCE.

Emperor Ashoka commissioned the construction of Stupa here after distributing the mortal remains of Lord Buddha to different places so that stupas are built and also to spread the message of Lord Buddha. The hemispherical dome is crowned by chattri, an umbrella-like structure which symbolizes honour and shelter to the relics of lord Buddha.

The great stupa which is the largest monument is also known as stupa 1 and is further beautified by the Pillars of Ashoka. The Shungas and the Satvahanas further enlarged the stupa by adding smaller stupas stupa 2 and 3 in the vicinity of the great stupa and also decorated with gates and railings.

Pillars of Ashoka were erected on one side of the thorana gateway. While the upper portion of the pillar is in the Sanchi Archaeological Museum, the lower part still stands firm near the stupa.

The Pillar is inscribed with Schism Edict by Ashoka and also is engraved with Brahmi characters from Gupta period. The conch shells referred to as Shanka Lipi by scholars were erected in the site.

Shunga is an ancient dynasty from Magadha which ruled the central and Eastern Indian Subcontinent from 185 to 75 BCE. After the fall of Mauryan dynasty Pushyamitra Shunga established the Shunga dynasty and made Pataliputra as  capital.

According to Ashokavadana ( Indian Sanskrit text which describes the birth and reign of Emperor Ashoka) it is believed that stupa may have been  vandalized by Pushyamitra in the 2nd century. Later his son Agnimitra rebuilt the stupa and covered the original brick stupa with stone.

The stupa was further expanded during the rule of the Shunga dynasty. It was expanded with stone slabs double the size of the original size. Three superimposed structures were built to crown the dome.

It was considered the Wheel of Law or Dharma.  The dome was made to sit on a high circular drum which became the pradakshina path for the visitors. It could be reached through a double staircase. The railings around the stupa are only slabs with some inscriptions on it.

Thoranas and Gateways at Sanchi Stupa 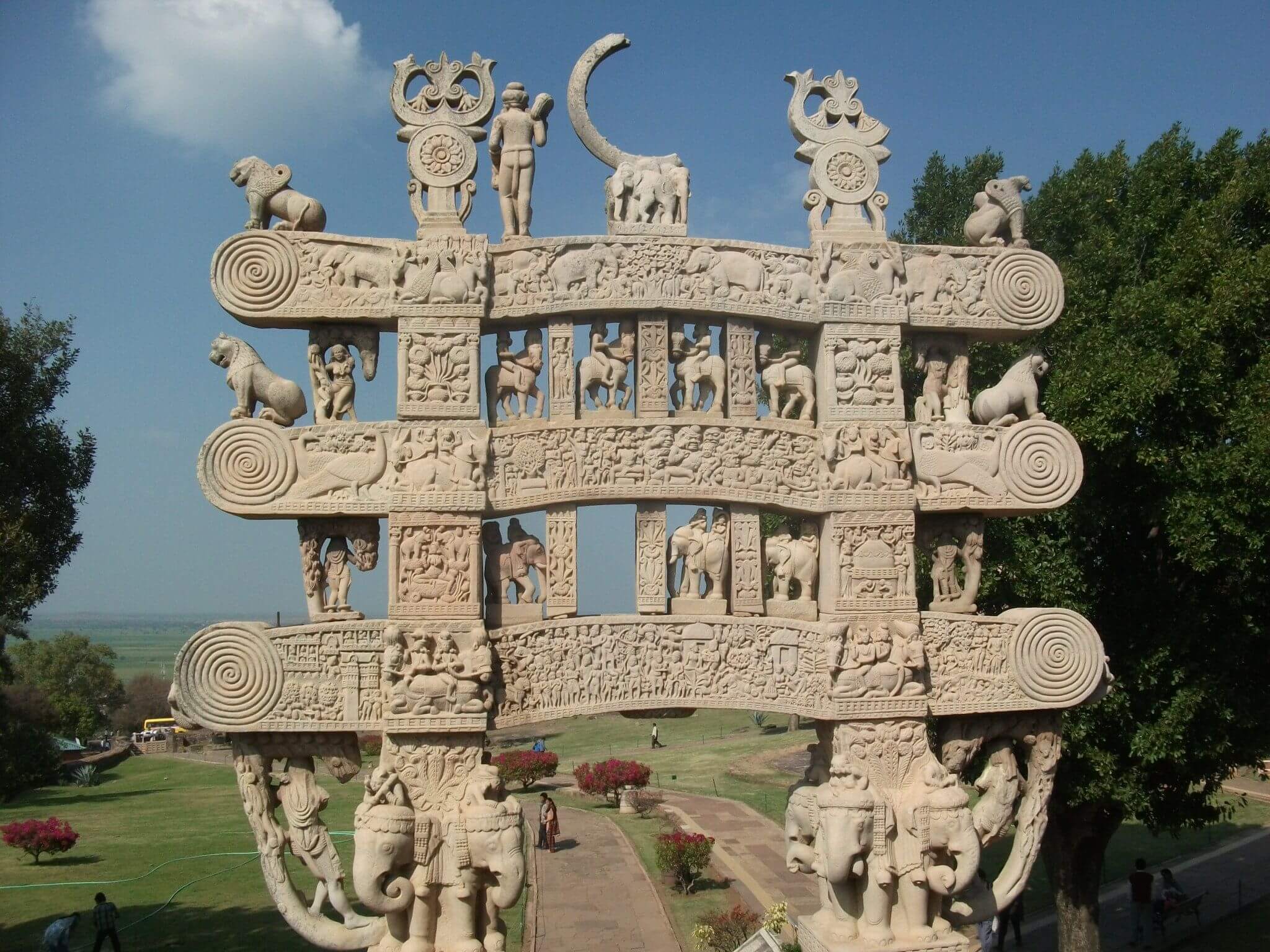 The Sathvahanas who conquered from Shungas have built beautiful gateways all along the Mauryan and Sunga Stupas. Around 1st century CE  thoranas were built by the Satvahanas. The Balustrades and gateways were decorated and coloured  with inscriptions in Brahmi script on the Southern gate.

When we take a close look at these gateways, we can see the carvings relating to the life history of Lord Buddha as elucidated in Jataka Tales. One of the most important features of the carvings is that Lord Buddha has been depicted in various forms like tree, thrones, Wheels etc.

The southern gate of the great stupa is the oldest and the main entrance for the stupa. The narratives on this gateway give a lot of importance to the relics of Buddha and the how Emperor Ashoka spread Buddhism. This gateway is one of the two which was reconstructed by Major Cole in 1882.

The Northern gateway was the second to be erected and is well preserved. The panels on the gateway relate to the various events of the life of Buddha. The external side of the pillar is separated by three bands. The pillars display Buddhists symbols as well as intricate designs on it.

The Eastern gateway is the third gateway which gives us information on various historical events during the life of Buddha. It also shows various miracles performed by Buddha. It is one of the richly carved thornas surrounding the “Great Stupa”.

The pillars on the Eastern Gateway have elephants in four directions with Yakshini under foliage flanking them on the side. The pillars are beautifully decorated on all four sides with different themes and with different miracles done by Buddha.

The western gateway is the last gateway to be built around the stupa. Like the other gateways it is richly carved and is composed of two square pillars mounted by capitals which in turn support a super structure  The pillars are carved with various Jataka Tales.

General Taylor, who was a British officer, came in rescue of the Stupas which were in a state of despair.  In 1818 he made a document in English about the existence of Sanchi stupa.  In 1851 Alexander Cunnigham and Fredrick Charles made the first survey officially and the excavations at Sanchi. By this time Amateur archaeologists and the treasure hunters had already ravaged the site.

Sir John Hubert Marshall who was the Director of Archeological Survey of India took up the task of restoring the Sanchi stupa between 1912 and 1919.

The site remains open on all days from sunrise to sunset. However summers are pretty bad. The best time to visit is from November to March when the weather is pleasant.