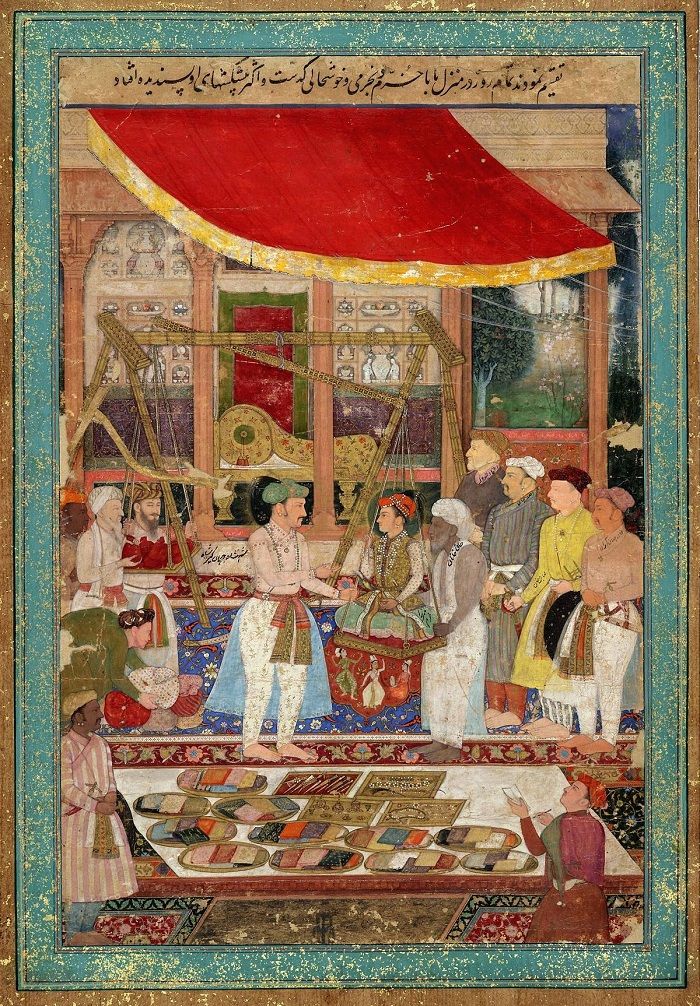 Mughal paintings evolved from the Persian school of paintings and were usually made as miniature paintings either as book illustrations or single work. Mughals were not only good rulers but were also famous for paintings, art and architecture. The monuments built during Mughal period are world famous even to this date. The best example is Taj Mahal. Similarly Mughals were famous even for the paintings and clothing.

Mughal paintings became famous during Mughal period around 16th to 18th century. It can be said that the Mughal paintings were in collaboration of Persian and Indian painters. Mughals can be given full credit for spreading the Islam art and architecture and also the faith across South Asia.

Mughal paintings became much better and bigger than the Persian paintings. Animal, plants, victory in the war, hunting scenes, royal life, mythological stories etc were some of the main themes in the paintings. The Mughal paintings spread to other Indian courts of Hindus, Sikh rulers as well.

Origin and History of Mughal Painting 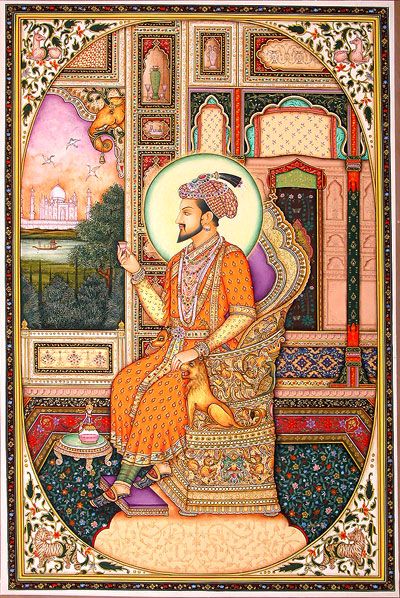 The actual foundation laid to Mughal Painting was by Humayun during his period. After Humayun returned from exile he was accompanied by two Persian artists Mir Sayyid Ali and Abd al-Samad. These two artists created many beautiful paintings including Khamsa of Nizami which had 36 illuminated pages which has different styles of various artists.

There are not many Mughal Paintings during Humayun’s period. One of the famous painting which he commissioned during his exile was the Princess if House of Timur which is now in British museum. The Mughal paintings flourished mainly during the period of Akbar, Jahangir and Shah Jahan. After the death of Humayun his son Akbar further carried and expanded Mughal art and architecture along with many paintings.

Check out for beautiful Mughal Paintings 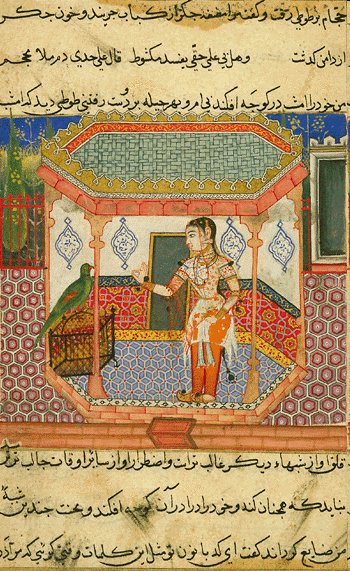 Mughal painting further improved and flourished during Akbar period. It became more Indianized. Since his childhood Akbar had very interest in the art and culture. He learnt about painting under the guidance of Abd-as-Samad. He encouraged art and culture during his reign and there were many painters during his period. Between 1560 -1570 he commissioned a number of paintings.

One of the famous paintings which Akbar commissioned was “Tutinama” which means “tales of Parrot”. Tutinama is a 14th century Persian stories of 52 stories. It contained 250 miniature paintings. It took almost five years to complete the paintings by Mir Sayyid Ali and Abdus Sammad. Tutinama is presently kept in Cleveland museum of Art in Ohio

Another major work which was commissioned by Akbar was Hamzanama. It narrates about the legendary of Amir Hamza. Akbar had enjoyed these stories during his childhood and hence he ordered the court to recreate Hamzanama. Most of the characters in this were fictitious and it had 46 volumes with 4800 pages. It also included 1400 pages of Mughal paintings that were larger in size. Mir Sayyid Ali and Abdus Sammad supervised the work which included around 30 senior artists and around 100’s of men worked in different aspects.

Some of the other important works during Akbar period include Gulisthan which was commissioned at Fatehpur Sikri in the year 1582, A Darab Nama, the Khamsa of Nizamiand Jami’s Baharisthan. Akbar also helped around 100 of painters to practice Mughal painting. 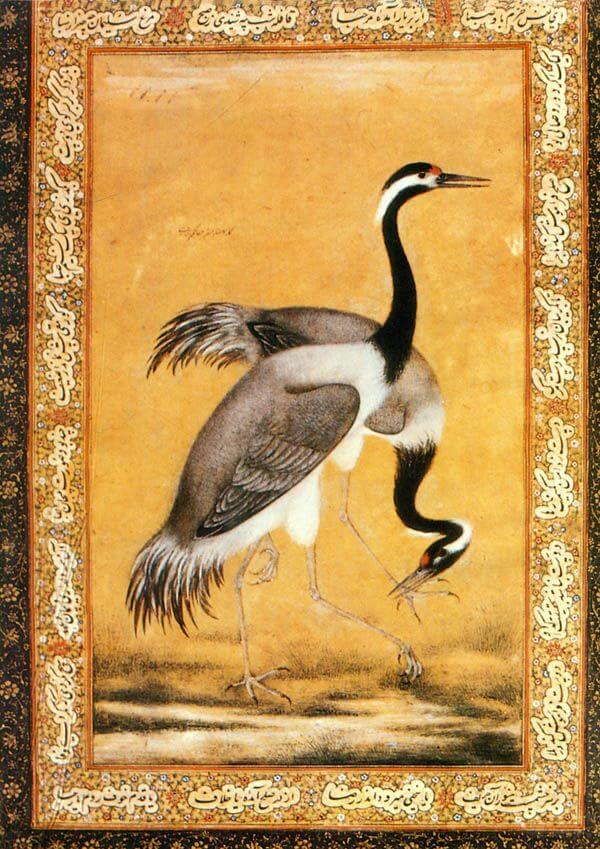 Most of the paintings during his period included portraits of his life, birds, animals and flowers. One of the best examples is the portrait of Jahangir who is holding a picture of Virgin Mary.  The major painting commissioned during his period was Jahangirnameh. It was a poem written during his life time about his on Rostam. It was written in Persian Language and had 3600 couplets. It had several paintings which included union of saint and tigress and also fight between two spiders.

Ustad Mansur was the famous painter in the court of Jahangir who did beautiful paintings of plants and animals. He gained the title of ustad during the end reign of Akbar. Bishandas was another important painter in Jahangir’s court. Not much is known about this great painter however it is understood that he was a Hindu. In 1613, Bishandas travelled to Persia to do painting of Shah’s portrait. 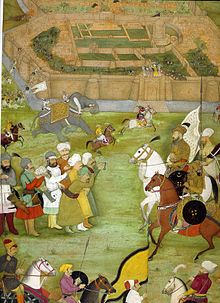 Shah Jahan had not only interest in architecture but also had lot of interest in painting. The world famous Taj Mahal was built during his period to his wife Mumtaz Mahal.  The paintings during his period became more rigid and formal.  Most of the themes of the paintings were garden or nature. It also had lovers in intimate position and musical parties. The Mughal paintings further grew and became more refined during Shah Jahan period.

The most important work that was commissioned during his period is known as “Padshanama”. It is a contemporary chronicle which was commissioned by Mughal Emperor Shah Jahan. Padshanama contained several paintings explaining the achievements of the king. It had beautiful portraits of even the courtiers, king’s servants.

The paintings were so clear and neat that even minute details could be identified. However the paintings of the king and nobles were adhere to strict profile and principles. The servants and the other court officials were painted in front view technique or method. The paintings were very grand and golden colour paint was the most used paint. Under Shah Jahan period both the architecture and paintings grew immensely. Many of the paintings during his period are kept in various museums. 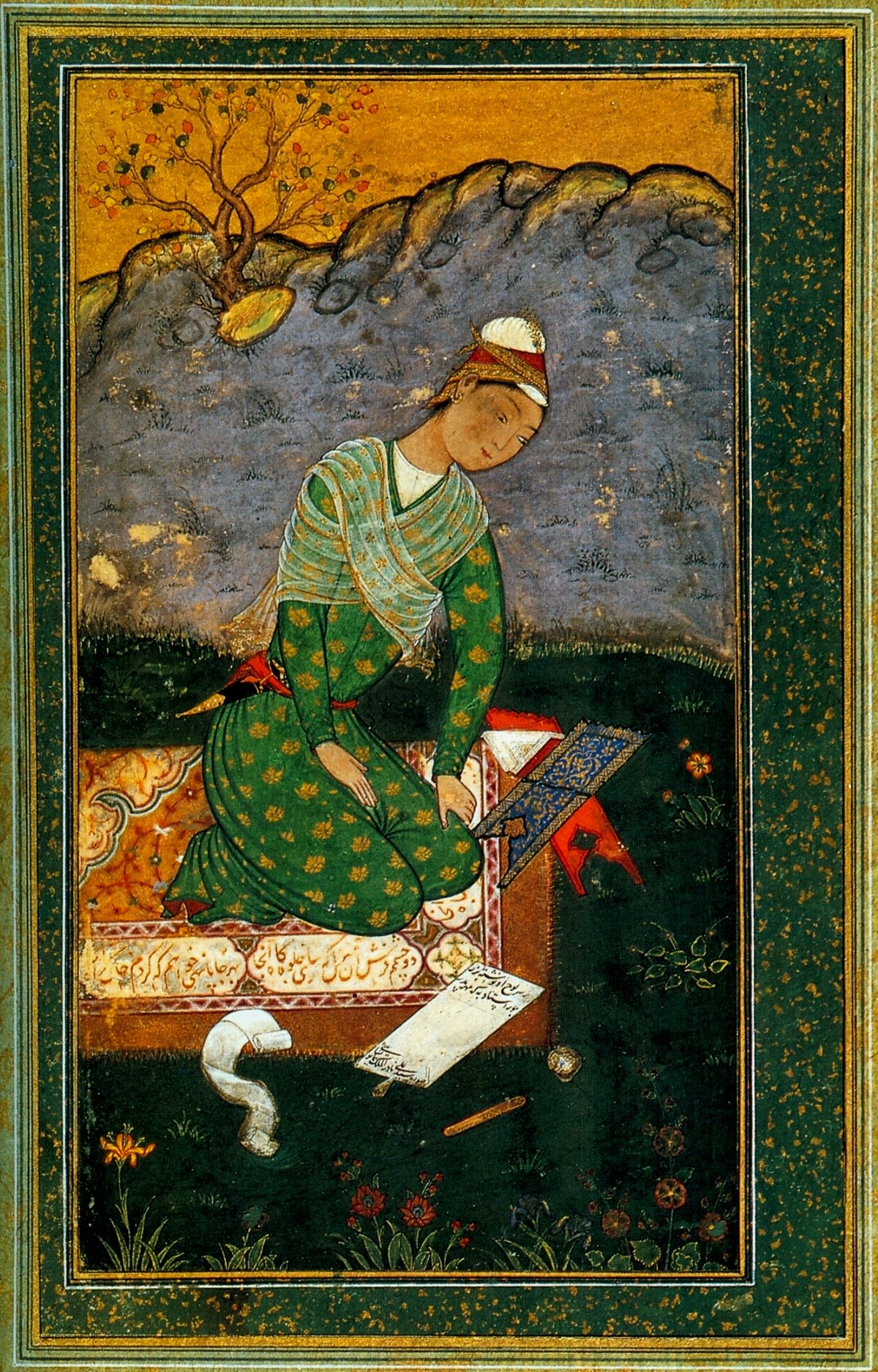 After a slight fall of Mughal Paintings during Aurangzeb period again it regained during Muhammad Shah period. He encouraged artists like Nidha Mal and Chitraman to do some best paintings. The best painting during his period was Rangeela.

But the Mughal painting lost its charm and glory. Many other Indian Paintings had developed by that time. But with the arrival of British East India Company all the Indian paintings got influenced with the Western Paintings.

Some prominent painters during Mughal Period 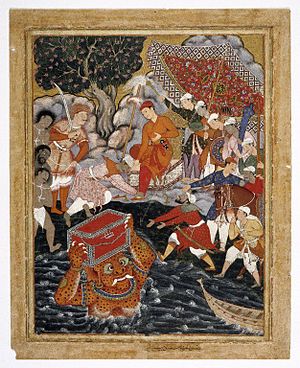 Basawan: He flourished between1580-1600. He was the famous miniature painter during Mughal period and became the court painter during Akbar rule. Very little is known about him. He has contributed to more than 100 paintings and some of the great works are illustrations for the Raznama, Akbar-nama, Darab-nama and the Timur-nama. He was one of the first Indian artists to be interested in western art and its technique.

He was the son of Basawan who was a noted painter during Akbar time. Some of his great paintings are kept in British museum and Victoria and Albert Museum. He was in both Akbar and Jahangir court.

He was the son of Bhavani Das who was also a great painter. Govardhan worked under three rulers Akbar, Jahangir and Shah Jahan. He was one of the illustrators in Baburnama which is currently located in British museum.

Other than these there were many other important painters like Miskin, Lal along with Mir Sayyid Ali and Abd al-Samad. Mughal paintings are still being created and are still passed from one generation to another.