Talakadu is one of the ancient and the most important place in the state of Karnataka, India. It is located at a distance of 45 km from Mysore district on the banks of river Kaveri. It is a desert like town where the temples are covered sand. The place has a very interesting history and the sand covered all over the town makes it one of the important places to visit and enjoy desert like place in South India. 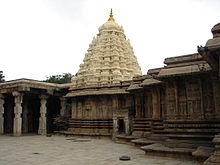 It is believed by the locals that there was an ascetic by name Somadatta. He was going to visit the Shiva temple in Talakadu. On there way back Somadatta and his disciples were killed by wild elephants. Somadatta and his disciples were reborn as elephants and started to worship Lord Shiva who was in the form of a tree in the forest. One day two brothers named as Tala and Kadu came to forest to cut tress. They tried to cut down tree in which Lord Shiva was present and were shocked to see the elephants worshipping the tree.

The boys were ordered to stop cutting the tree and later the tree was restored and all of them attained Moksha.  Hence the place got the name as Tala-kadu. The Cholas who captured Talakadu in 11th century named it as Rajapura later after nearly 100 years Hoysala captured Talakadu from Cholas. 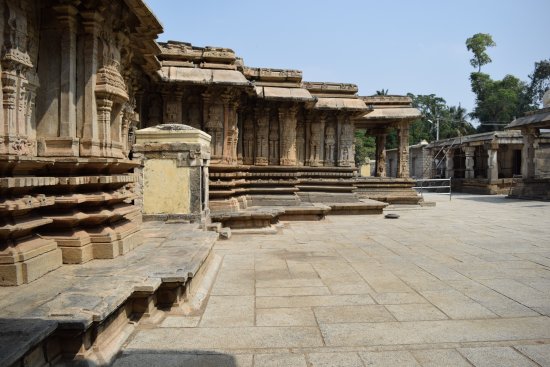 All this happened when Vijayanagara Empire was ruling Talakad. Srirangayya of Vijayanagara Empire was ruling at Srirangapatna. Tirumala Raja also known as Srirangayya fell sick and wanted to offers prayers to Vaidyesvara temple in Talakadu. At that time his second wife Alamelamma was given the power to take care of administrative matters of Srirangapatna. After some days when Alamelamma heard about her husband’s health and that he was on his death bed went to Talakadu giving the powers of Srirangapatna to Raja Wodeyar of Mysore Wodeyar dynasty.

Impact of the curse

After the curse Raja Wodeyar who returned to Srirangapatna started to hold the Dasara festival for the first time in the year 1610. His only son Narasaraja Wodeyar died all of a sudden a day just before the Navaratri. It is believed that Narasaraja Wodeyar died due to the effect of curse. However Raja Wodeyar did not stop the celebrations of Navartri festivals and continued the grand festival to happen. Temples in Talakadu are buried in sand even to this day and the famous Vaidyanatheswara temple and at Malangi the river is very deep. The local people who are living in Talakadu at times have to leave their homes and move further because of the huge sand that pile up during south west monsoon season.

On the banks of river Kaveri, Talakadu host Panchalinga Darshana festival once in twelve years. The five temples in Talakadu are Kshethra Sri Vaidyanatheshwara, Sri Pathaleshwara, Sri Maruleshwara, Sri Arakeshwara, Sri Mudukuthore Mallikarjuneshwara are the most famous panchalingas in Talakadu. The priest collects water from Gokarna pushkarni and offers pooja to all the Shiva lingas simultaneously. The temples are beautifully decorated with plantain leaves and flowers. The festival is attended by millions of people all around the world and the festival is spread for a period of five days. It is an opportunity to view and get blessed from all the five Shiva lingas in Talakadu. The auspicious day to celebrate the festival is decided by the high priests on looking into the Hindu calendar. After doing pooja to all the panchalinga later on Gajaraohana, Sridivya Brahma Rathotsava would be performed along with Sri Shyanotsava. Theppotsava is done on the third day along with poorvaka Kailsavanahana on the fourth day and on the last day it would be Nandi Vahanotsava. 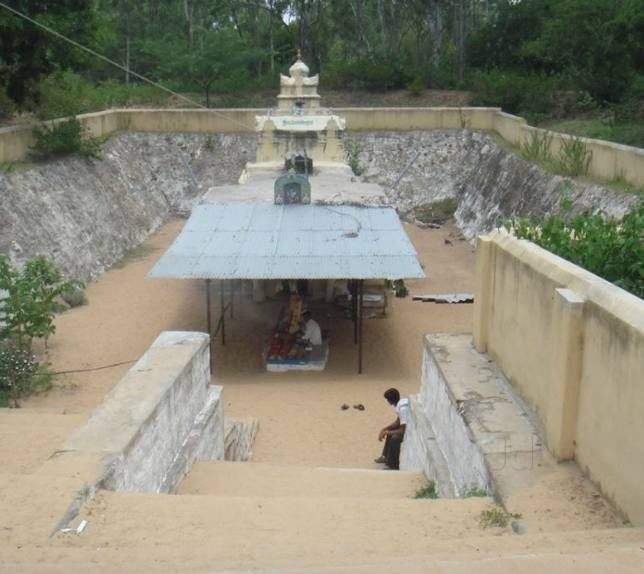 The Talakadu the temples are covered with sand.  There are mainly of Pathaleshwara, Maruleshwara, Arkeshwara, Vaidyanatheshwara and Mallikarjuna temples. These five lingas make the panchalinga in Talakadu and the festival of pancha linga is celebrated once in twelve years. The pancha linga Darshana is held on a new moon day in the month of Karthika.

Pathaleshwara Temple:  It is one of the oldest temples built during the Ganga period. The tower over the garbha griha and shrine was later renovated during the Chola period. Other than the Shiva linga found other images that are found here are Trimurti Brahma, Simhavahini and Durga images.

Maruleshwara Temple: This is also one of the oldest temples built during Ganga period.  The temple has a huge Shiva linga inside the garbha griha. Other than the Shiva linga some other images that are found here are Mahavishnu, Durga standing on the Asura Mahisha and Karthikeya.

Arkeshwara temple: This temple is located little far of the Talakadu village. Along with Linga the other images that are present in Arkeshwara temple are Durga and Bhairava. There is a rock which has vaastu yantram attached to it. It is believed that any animal like cow if suffering from any disease and if tied to this rock all its diseases would be cured.

Vaidyanatheswara temple: The temple is built in South and North Indian styles of architecture. The temple has a sanctum with Vesara tower. The temple is built on a platform and the outer walls are decorated with the images of Shiva and other Gods. It is a very ancient and very important temple in Talakadu. It is believed that people who visit this temple will get rid of all health related issues and all the sins would be removed. The temple has two huge dwarapalakas and the doorways are intricately carved with beautiful designs and images. There is also Nandi statue at the entrance of the temple. To the north of the temple there is  huge hall with shrines of different deities. There is a huge prakara (space all round the temple) which has sculptures of Ganga, Hoysala and Vijayanagara period. This is the temple where Sri Ranga Raya who was suffering from incurable disease came to offer sacrifices to God.

Mallikarguna temple: This temple is located little far off from Talakadu village. It has a Shiva linga which is one of the pancha lingas of Talakadu. Images of many other Gods can also be seen here.

How to reach Talakadu

The distance between Talakadu and Mysore is around 45 km. The nearest railway station and airport is Mysore. Otherwise one can come to Bangalore international airport and from there take a cab or a bus to Talakadu. The distance between Bangalore and Talakadu is around 140 km. There are good bus services available from major cities of Karnataka and other states. Talakadu which is like a desert town is a must visit place in Karnataka. 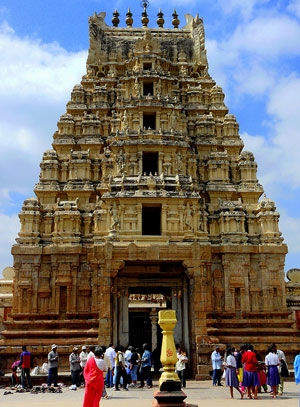 Srirangapatna is a historical place located in the Mandya district of Karnataka, India.  It is most famous and was a very important place for two great leaders of Deccan kings like Tipu Sultan and Hyder Ali. This beautiful town is an island formed by River Kaveri and on the highway between Bangalore and Mysore. There are many tourists place in Srirangapatna and around the town. Srirangapatna got its name from the ancient Sri Ranganathaswamy present in the town. The temple is dedicated to SriRanganathaswamy which is an avatar of Vishnu. It is an important pilgrimage centre for Hindus. Sri ranganatha swamy temple at Srirangapatna is one of the five important sacred temples dedicated to Lord Ranganatha (a form of Vishnu) on the banks of river Kaveri. The other four temples are Sriranganatha Swamy temple in Srirangam, Sarangapani temple Kumbakonam, Sri Appakkudathan Temple Trichy, Parimala Ranganatha Perumal Temple Indalur, Ranganatha Temple Nellore.

Sri Ranganathaswamy temple in Srirangaptna is also known as Adi Rangam or the first temple on the banks of river Kaveri. It is believed that the temple was originally built in 894CE by Tirumaliah of Ganga dynasty. It was further expanded by Hoysala’s and the Vijayanagara Empire. The lord Ranganathaswamy was also honoured by Tipu Sultan. The Nayaka rulers also expanded the temple complex. His descendants ruled further till 1495 until the Vijayanagara Empire took over the town and the temple.

The temple has been built in three different stages. The main idol of the temple Ranganatha is considered as very ancient and is said to 3600 years old, the innermost part of the temple dates back to Hoysala period and the gopuram dates to Vijayanagara period. The sanctum is surrounded by a mandapa or complex. The main deity in the garbha griha is in the sleeping posture and above its head is the seven headed serpent.  Goddess Lakshmi is at the foot of Lord Ranganatha. Other Gods that are there in garbha griha are Sridevi, Bhudevi and Brahma. There are other shrines of Gods like Hanuman, Srinivasa, Garuda and Goplakrishna.

The prakara or the complex is in rectangular in shape and the entrance has a huge gopuram which is decorated with different idols of Gods. The main structure of the temple is vestibule, hall and a mukhamantapa. The top of the mukha mantapa is beautifully decorated with miniature towers and with a garland. The temple is a very important shrine for the Hindus and the Vaishnavites in India. The exquisite carvings of the Hoysala’s and Vijayanagara period are worth watching and praising. The temple has four pillars on which different images of Vishnu is sculpted on it. The entire prakara is beautifully painted showcasing the mythological stories on it. The temple is open on all days from 7:30 am to 1:30 pm and from 4pm to 8pm.

Places of interest in Srirangapatna 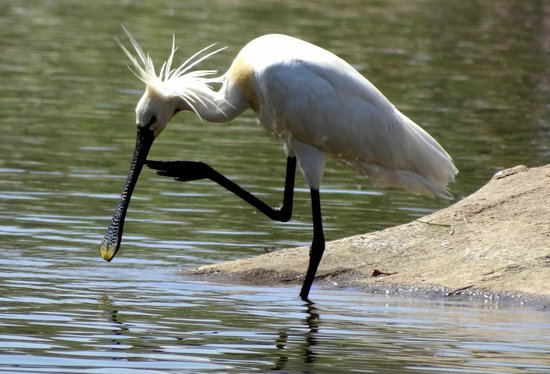 Srirangapatna has many beautifully other than the Sriranganatha swamy temple. Some of the places are

Srirangapatna Fort: It is a historical fort built by Timmana Nayaka in the year 1454. It is built in Indo Islamic style of architecture with huge Persian inscription at the entrance of the fort.

Ranganthittu Bird Sanctuary: It is located just 5 Km from Srirangapatna. It is spread over 57 km and attracts different species of birds every year. It is located on the banks of River Kaveri and is also very close to Mysore. The best time to visit the bird sanctuary is from June to November and December is the best season to visit to watch the migratory birds.

Nimishamba temple: This temple is dedicated to Goddess Parvati and is located on the banks of River Kaveri just 2 km from Srirangapatna. ShriChakra is carved on the stone in front of Nimishabha and pooja is performed every day to the Shri Chakra.

Ghosi Ghat: This is a famous picnic spot on the way to nimishaba temple. It is located near Gumbaz and the place has a Kasi Visverwara swamy temple.

Karighatta: One can get a beautiful view of Mysore and Srirangapatna from Karighatta Hill view point. A small river called as Lokapavni which is a tributary of Kaveri flows along the Hill. The hill is very closely located to Srirangapatna.

Gumbaz: It is a burial chamber of Tipu sultan, his father Haider Ali and mother Fatima Begum. It is built on a raised platform with beautiful decorated doors with ivory.

How to reach Srirangapatna