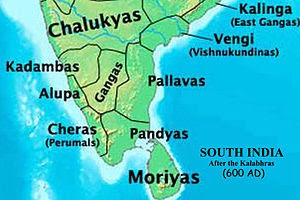 Another important Dynasty that ruled South India is Chalukya Dynasty.  They ruled most parts of South India from 6th and 12th century. The Chalukya’s rose to power in the Deccan.  It is mainly divided into 3 dynasties and ruled individually even though all were related to each other. 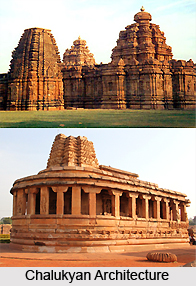 One of the great Dynasty of Chalukya Dyansty was Badami Chalukya Dyansty.  They ruled over the areas between Vindya Mountains and river Krishna. The first great ruler of Chalukya Dynasty was Pulakeshin 1.  He made Badami or Vatapi as his capital.  He adopted the title Vallabheshvara and performed Ashvamedha. Pulakesin I (550-566) was the real founder of the Chalukya dynasty of Badami.. He was succeeded by Kirtivarman I (566-597) who further extended the kingdom by defeating the Mauryan Dynasty of North-Konkana, the Nalas of Nalavadi (Bellari) and the Kadambas of Banavasi. He constructed many temples and buildings in the town of Vatapi. The Badami Chalukyas were Brahmins and performed all Vedic rituals. . Like Chola Dynasty Badami Chalukya Dynasty were famous for building breath taking temples in South India.  A lot of temples of Shiva and Vishnu were built during this period.  The rule of Chalukya’s marks an important history of Karnataka.  Though Pala was a Hindu King, he was tolerant to Buddhism and Jainism.

Pulakeshin 2 was the son of Kirthivarman. Since he was a minor Mangalesa brother of Kirthivarman began to rule as a reagent. Mangelsa conquered many states and refused to hand over power to pulakeshin2. Hence Pulakeshin2 had no choice but to wage war against his uncle Mangalesa. He adopted the title of Satyashraya. During the reign of Pulakesin II, the Chalukyas became the super power in the Deccan, as the Western Gangas and the Alupas in the South and the Latas, Malavas and Gurjaras in the north offered their submission to him without any fight.

The army of Pulakeshin 2 defeated the forces of Harshavardhan of Vardhan Dynasty on the banks of the Narmada which was ruled by Mahendravarman 1 and he annexed Vengi, the northern most territory of Pallavas which is situated between Krishna and Godavari River.  The Pallava King Narasimhavarman 1 occupied the Chalukya capital at Vatapi in 642A.D. During this time Pulakeshin 2 was probably killed.  The Chalukya dynasty was famous for building temples. They have built a number of rock cut cave temples and structural temples of brick dedicated to Shiva, Vishnu and Brahma. Though Chalukya’s throne remained vacant from 642-655AD. Vikramaditya1 took over the reigns in 655AD.  He tried to restore back the glory of Chalukya dynasty. Vikramaditya 1was able to over throw the Pallavas from Vatapi and was also able to take revenge against Pallavas for his father’s death. He kept a check on Arabs. Later weak rulers came up in the Chalukya Dynasty. They were unable to keep a check on Pallavas and others.

The Society in Chalukyan rule was divided into four castes like Brahmanas, Kshatriyas, Vaishyas and Sudras. Brahamans were busy doing works like priests, teachers and Religious propagators. Mostly the ministers were Brahmans. The traders were the Vaishyas. And the farmers were called as Sudras. Among all of them the Kshatriyas formed the ruling class.

The caste system in Chalukyan Dynasty was very rigid and they were divided into sub-castes also. Marriages between the same gotras were strictly prohibited. Inter-caste marriage was not allowed. Mostly the weddings were arranged by the parents and sometime girls were given liberty to select the husband. Women secured great respect in the society and they could sacrifice everything for the sake of the prestige.

The administration was highly centralized unlike that of the Pallavas and the Cholas. Village autonomy was absent under the Chalukya’s. The Chalukya’s had a great maritime power. Pulakesin II had 100 ships in his navy. They also had a small standing army. They also had officers in each state who reported the work happening and problems faced by the people to the king. King was the highest power and head of all administrative authority. He took the advice of council of ministers for important decisions. The chief queen of the king was called 'Tattamahish'. The prince was appointed on the post of Yuvaraja. The chief minister was called as Mahamatya

Besides ministers there were other officers who helped the king in administration of the state. The administration of Mandal was called Mahamandaleshwara. The chief of the army was called Dandadhipatya. The heads of the village and law department were called Visayika and Adhishthanaka. Kanaka, Dandanayaka. Sandhivigrahika, Dutaka, Mahakshapatalika were other officers as well. 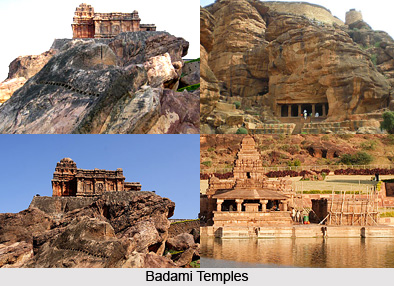 The Badami Chalukya era (7th and 8th century) was an important period in the development of South Indian architecture. Their style of architecture is called “Chalukyan architecture” . The Chalukya’s were famous for building temples. They have built a number of rock cut cave temples and structural temples of bricks dedicated to Lord Shiva, Vishnu, and Brahma. Some of the famous stone temples build by Chalukya’s are Badami, Aihole and Virupaksha temple at Pattadkal in Bijapur. The cave temples especially those built at Badami contain fine sculpture of Vishnu, Seshanag, Varaha the boar. These temples are a mixture of Northern and Dravida style of temple architecture The temples are located on the banks of River Tungabhadra and Malprabaha in Karnataka and Alampur in Andhra Pradesh , which is near Kurnool.  The largest temple of Chalukyas of Badami is Virupaksha Temple, whose complex encloses 30 sub shrines and a large Nadi mandapa. This was also earliest example of Shiva temples, which have a Nandi pavilion in front of the temple. It is very difficult to explain the beauty of these temples. They are worth watching and are hot touristic places in Karnataka even now.

Among the temples at Badami, the Muktheeswara temple and the Melagutti Sivalaya are known for their architectural beauty. A group of four rock-cut temples at Badami are marked by highly skilled work. . The walls and pillared halls are sculpted by beautiful images of gods and human beings.

The Papanatha temple is the most notable in the northern style. The Sangamesvara temple and the Virupaksha temple are famous for their Dravidian style. The Virupaksha temple is built on the model of the Kailasanatha temple at Kanchipuram. It was built by one of the queens of Vikramaditya II. Sculptors brought from Kanchi were employed in its construction. These temples are very huge and majestic. No words can explain the beauty of the temples constructed during Chalukyan Period.

The Badami Chalukya dynasty went in to a brief decline following the death of Pulakesi II due to internal rivalry. . The empire reached its peak during the rule of the illustrious Vikramaditya I who defeated the Pallava Nandivarman II and captured Kanchipuram. The last Badami Chalukya king Kirtivarman I was overthrown by the Rashtrakuta Dantidurga in 753. At their peak they ruled a vast empire stretching from the Kaveri to the Narmada 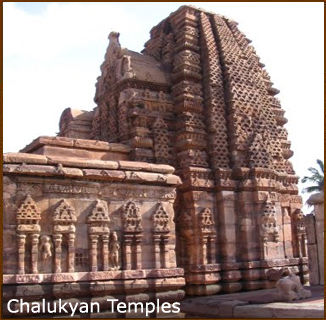 A ruler of Badami Chalukya conquered Vengi in 624 A.D. after the decline of Chalukya’s of Badami.  They ruled nearly for 500years.  Eastern Chalukya’s were closely related to Chalukya of Vatapi. Kubja VishnuVardhan started Chalukya’s of Vengi.  He was the brother of Pulakeshin2. It is assumed that Pulakeshin 2 appointed Kubja VishnuVardhan as Viceroy of Vengi   around 620A.D.  Throughout the history of Chalukya’s of Badami there were many wars between Chola’s and Western Chalukya’s son Jayasimha(641-673A.D.). He accepted the title of Vishamasiddhi. He made Pishtapura or modern Pithapuram as his Capital. .  VishnuVardhan extended his dominions up to Srikakulam in the North and Nellore in the South. He was succeeded by his son Jayasimha(641-673A.D.).

Due to the continuous war Chalukya’s of Vengi entered into a matrimonial alliance with Chola’s of Tanjore.  As a result Chola’s became more powerful.  The five centuries of Eastern Chalukya’s not only saw good administration but also saw in the improvement of Telugu culture, literature’ poetry and art during their rule. It can be said that Eastern Chalukya period was the Golden Period for Andhra History.

After Jayasimha1, there was no strong ruler who could protect their Kingdom.  The weak rulers faced the strong Rashtrakuta’s. The wars between Rashtrakuta’s and Eastern Chalukya continued for a long period.  Gunaga Vijayaditya3 the eldest son of Kali VishnuVardhan ruled Vengi from 849-892 A.D.  He had the title Gunakenallatta(  lover of excellence).

Western Chalukya also known as Kalyani Chalukya’s ruled the major portion of Western Deccan South India from 10-12th century.  Tailapa 2 who governed from Tardavadi as a feudatory of Rashtrakuta King Karka 2 re established Chalukya in Western Deccan.  The Western Chalukya’s ruled for 200years. There were many wars between the Western Chalukya and Chola’s to control the fertile land of Vengi.  During these conflicts the Chalukya’s of Vengi supported Chola’s due to their matrimonial alliances.  Some important rulers of this Dynasty are Taliapa 2, Satyasraya, Someshwara, Vikramaditya 6.

Someshwara 1 was succeeded by Somesvara 2 who had the title Bharanaikamalla. Vikramaditya 6 was the one of the greatest ruler of Chalukya’s of Kalyana.  Vikramaditya 6 ended his elder brother Somesvara 2 rule in a civil war with the help of Seuna Chandragupta 2. An inscription from Gadag mentions that Vikramaditya set aside the Saka Varsha and made his own name famous by instituting a Vikrama Varsha.  The long reign of Vikramaditya was fairly peaceful.  Vikramaditya just did not limit himself to South. He had successful campaigns to East Bihar and Bengal.  With the descent of Vikramaditya 6 even the Chalukya’s 6 of Kalyani came to an end in 12th century.

The internal fights and attack from Pallavas mainly led to the decline of Chalukya Dynasty.