Gupta Dynasty in India is called as the Golden Age of Indian History. With the decline of Khushan Dynasty many foreign traders started to invade India from North and South. During this period Gupta Dynasty came into existence which ruled for 300 years in India. This Dynasty had a huge impact on India.  Even though it did not expand to whole part of India like Mauryan Dynasty but still it had a vast impact on the political, social, trade of India. This period is also called as Golden Age of India. Srigupta1 founded Gupta Dynasty and made Pataliputra as capital of Gupta dynasty in India.  He was succeeded by his son Ghatotkcha (290 - 305 A.D.)

Ghatotkcha was succeeded by Chandragupta1 (305 - 325 A.D.).  During the period of Gupta dynasty administration was very well maintained. Aryabhatta and Varamihira the two great mathematicians were present in Gupta Dynasty  and contributed a lot to mathematics. The concept of zero and infinity was discovered in Gupta Dynasty.  Education was given lot of prominence.

During the period of Gupta Dynasty astronomers came to a conclusion that earth is not flat but round in shape. The field of medicine also advanced during this period. Kalidasa the great poet belonged to Gupta Dynasty. Some of his great works are Abhigyana, Shakuntala, Meghadutta. The next important ruler who came to power after Gupta Dynasty was Harshavardhan also known as Vardhan Dynasty. 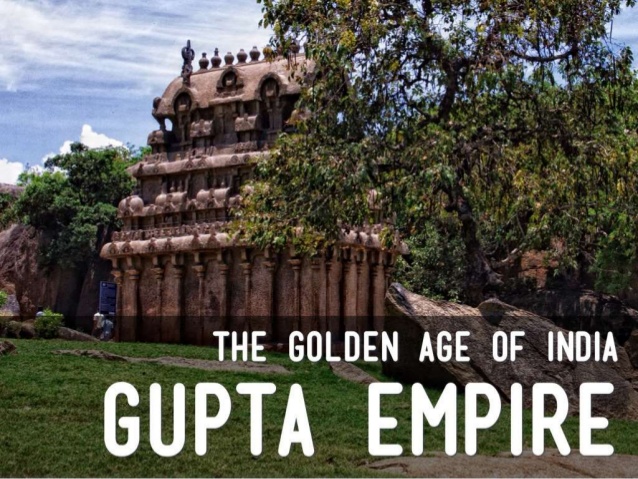 Son of Ghathokcha , Chandragupta 1 was one of the most important ruler of Gupta Dynasty. He ruled from 319 A.D. till 335 A.D. Chandragupta 1 married kumaradevi who was Lichavvi princess.

Soon he was able to extend dominion over Oudh as well as Magadha and all along the Ganges up to Allahabad. Chandragupta1 assumed the high-sounding title of Maharajadhiraja (Great king of Kings.)

For the love towards his wife, Chandragupta issued gold coins in the joint names of himself, his queen Kumaradevi. Gold coins also had the inscription of Lichchhavi nation. Emboldened by his success he established a new era in Gupta dynasty.

In all likelihood, the reign of Chandragupta I ended about 335 A.D. Even his son was careful to describe himself as the son of the daughter of Lichchhavi. There is some dispute regarding his succession since a few gold coins have been found in the name of Kacha. It is generally held that his name is Samudragupta.

The fourth ruler of Gupta Dyansty was Samudragupta.  He was the son of Chandragupta 1 and kumaradevi. Samudragupta was a passionate warrior. He was inspired by the ambition of becoming "Raja Chakravarti" or the greatest emperor or king of kings and "Ekrat", undisputed ruler. His conquest policy in the North was known as Dig Vijay meaning conquering and annexation, but in the south it was Dharma Vijay meaning conquering, but not annexation.


Even though he was not the eldest son of Chandragupta1, he was chosen to become the King among his brothers because of his strong characters. Samudragupta ruled from 335 – 380A.D. The western Cholas call him as Indian Napolean due to the extensive military achievement. The accession of Samudragupta to throne was not liked by many. The new King had to fight with his own brother named Kacha whom Samudragupta defeated. Some coins bearing the name of Kacha support to this theory, but however some historians believe that Samudragupta had called himself as Kacha as coins of Kacha carried Sarva Rajochihetta which is applicable only to the victorious ruler.

Samudragupta was also a great patron of art and literature. Always around him was a crowd of poets and scholars with the most illustrative ones of them including Harishena, Vasubandhu and Asanga. In fact, Samudragupta possessed incredible music and poetic abilities. Though he was staunchly devoted to Lord Vishnu, he exhibited a great degree of religious tolerance and even respected other religions including Buddhism. During his reign, he permitted the Ceylon ruler to build a monastery at Bodh Gaya.

Harishena was the court poet. He was the author of the Allahabad inscription pillar. This gives the information about Samudragupta invasion. He was fully aware of the achievements of Samudragupta and described it in chronological order.

Samudragupta had unique plan to expand his state. Before he went far off places to conquest, he first subdued his neighbouring kingdoms. In northern India Samudragupta defeated kings called as Achyuta Naga, Naga Sena and Ganapati Naga. Towards South and all along the coast of Bay of Bengal he defeated Pithampuram’s Mahendragiri, kanchi’s Vishnugupta,  Mantaraja of khosala and Mahendra of khosala and reached river Ravi. As he expanded his territory Samudragupta found it difficult to maintain and manage the huge territory.

He adopted the policy of Dharma Vijaya, which means conquest and not annexation. He later again moved north to further expand his kingdom. He decided to distruct Aryavartha in order to make Gupta Dyansty vast. The huge military adventure of Samudragupta defeated nine kings of Aryavartha. According to manusimrthi the term Aryavartha means land between the Himalayas and the Vindyas. By conquering the nine Aryavartha, Samudragupta became master of large place of Aryavartha.

Samudragupta’s huge success in north and south India was simply unquestionable. He wanted the whole of India under his control. Some kingdoms were forcibly annexed and the Kings were made prisoners. Later on they were set free after the prisoned rulers accepted Samudragupta as their ruler.

Some frontier monarchs and tribes voluntarily accepted his rule and gave their kingdoms to Samudragupta, while others did not. Samudragupta performed the Ashwamedha (sacrificing Horse for military supremacy) as a token for his supremacy. In this the King issued Ashwamedha a type of gold coin depicting the sacrificed horse on one side and on the other side it was queen.

While he was performing this he distributed large sum of coins as charity. The Ashwamedha sacrifice was performed probably after the incision of the Allahabad pillar inscription. Ashwamedha Yagna gave him the title of Maharajadhiraj, the supreme king of kings.

If Gupta period can be called as golden age most of the credit goes to Samudragupta. He united India and subdued enemies. After a long reign of rule Samudragupta died in 375 A.D. and was succeeded by his son Chandragupta 2 Vikramaditya 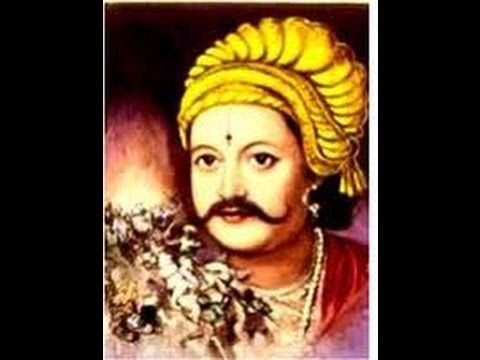 Samudragupta and Dattadevi’s son Chandragupta became the next ruler of the huge Gupta dynasty. Like his father Chandragupta was also a great conqueror. Samudragupta had kept good friendly relations with foreign powers Sakas etc. But Chandragupta 2 crushed Sakas and annexed Malwa, Gujarat and Saurastra. Chandragupta 2 then moved towards westward to conduct a series of attack. But before he could do that he made a   matrimonial alliance with Vakataka kingdom by giving his daughter to Vakataka king’s son Rudrasena 2.

After conquering Gujarat and Saurastra, Chandragupta 2 made Ujjain his political headquarters due to this many ancient ports came under the control of Gupta’s. This led to open flood gate to trade from west through Egypt. The Indian merchants carried extensive trade with the countries of the west through Egypt. The Western merchants too found their way to Indian ports.

This increased the flow of wealth into India. Chandragupta 2 also gained control on Kushans and concurred Mathura and other parts from them. The Mehruali iron pillar near Qutub Minar in Delhi engraves the military success of Chandragupta 2. The gold coins issued during this period shows a man holding a bow on one side and on the other side figure of goddess seated on couchant ( lying down of stomach)

During Chandragupta 2 reign art and architecture improved. Ashwamedha Yagna gave him the coveted title of Maharajadhiraj, the supreme king of kings. Chandragupta 2 like his father was a great ruler and administrator. He not only ruled a vast empire but also gave a sound administration. There was lot of peace and prosperity during his rule. Trade increased after his conquests on west.

The Chinese pilgrim Fa-Hien visited India during his reign was full of praise for Chandragupta 2 for his good administration. The court of Chandragupta 2 consisted of nine gems. Kalidasa was one among them. The other learned members were men such as Varaha Mihira, Vararuehi, Betalabhatta, Gahtakarpara, Dhanwantari, Kshpanaka, Amarasingha, and Shanku, the Gupta Emperor rendered valuable services to the culture of age.

One of his ministers named Virasena was also a reputed poet. Chandragupta 2 was a follower of Vishnu.  But still he was tolerant to other religions like Buddhism, Jainism. The figure of Garuda was the emblem of Gupta flag. After the death of Chandragupta 2 his son Kumaragupta became the next ruler.

Very few monuments built during Gupta reign are present today. Examples of Gupta architecture are found in the Vaishnavite Tigawa temple at Jabalpur (in Madhya Pradesh state) built in 415 AD and another temple at Deogarhnear Jhansi built in 510 AD.

After Kumaragupta his son Skandagupta succeeded him. He ruled from 455 - 467A.D. As soon as he ascended the throne Skandagupta had to face challenges from Pushyamitra. He defeated Pushyamitra and Huns. Skandagupta faced stiff fight from his step brother Purugupta. He was the son of queen Anantadevi. As Skandagupta mother was not chief queen, he had to fight with Purugupta for his rights.  Skandagupta died in 467A.D. He was succeeded by his son Narasimha Gupta. Skandagupta is considered as the last recognised King of Gupta Dyansty. 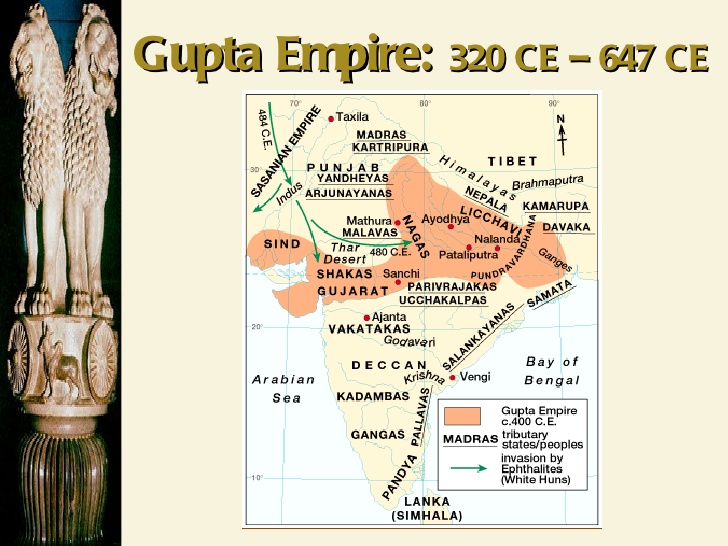 The Gupta empire ruled from 320 - 550 A.D. and also called as golden period started to decline during Skandagupta period.  The internal fight and external fight was the main reason for the decline.  Skandagupta could not handle the Continuous pressure from the invaders. The governors appointed by the Gupta kings in north Bengal and their feudatories in Samataka broke away from the Gupta control. After Skandagupta all rulers were weak who could not sustain invasion from Huns and others. As the central leadership became weak many north western region assumed the states of independent rulers such as Maitrakas, Panivarhaks etc. All these and many more led to the fall of one of the mighty and great Dynasty.