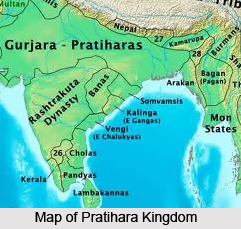 Gurjara Prathihara of India also known as Prathihara Empire ruled for 400 years.  They are believed to be the clan of Rajput. They ruled first at Ujjain and Kannauj. The founder of this huge dynasty was Harishandra. Gurjara Prathihara had kept a check on Arab armies.  After Harishchandra died in 730 A.D. Nagabhatta 1 became the ruler from (730- 756 A.D.). After the death of Harshavardhan Gurjara Prathihara gained more prominence.

Nagabhatta1 was a able ruler. He was able to resist Arabs for a very long periodNagabhatta1 was a good administrator and made many reforms in land revenue and welfare of people. The famous battle of Rajasthan took place. Battle of Rajasthan: It was during the time of Nagabhatta I , when Junaid, another Arab commander invaded India after Mohammad Bin Qasim. Nagabhatta I along with his feudatories such as Chauhans and Guhilots defended the western frontiers but the Arabs were too strong and did  lot of damage to western Frontiers. Junaid was defeated and his successor Tamin was compelled to go back to Arab defeated and wounded. This is known as Battle of Rajasthan. He was succeeded by Vatsaraja who captured Kannauj and came in direct conflict with the Palas of Bengal. He defeated Dharmapala.  In 786 AD the Rastrakuta King Dhruva defeated Vatsaraja. He died in 805 AD. 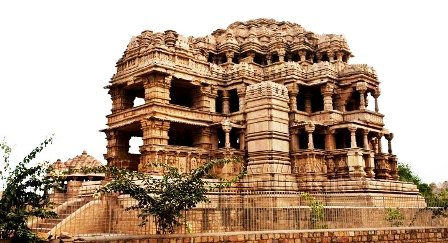 Bhoja II (910–912) was overthrown by Mahipala I (912–914). Several feudatories of the empire took advantage of the temporary weakness of the Gurjar Pratiharas to declare their independence, notably the Paramaras of Malwa, the Chandelas of Bundelkhand, and the Kalachuris of Mahakoshal. The Rashtrakuta emperor Indra III (c.914–928) briefly captured Kannauj in 916, and although the Pratiharas regained the city, their position however continued to be weak. In 10th century, partly as a result of fight from Turks from the west and the Pala advances in the east the Gurjar-Pratiharas lost control of Rajasthan to their feudatories, and the Chandelas captured the strategic fortress of Gwalior in central India, By the end of the tenth century the Gurjar Pratihara domains had dwindled to a small state centered on Kannauj. Mahmud of Ghazni sacked Kannauj in 1018, and the Pratihara ruler Rajapala fled. The Chandela ruler Gauda captured and killed Rajapala, placing Rajapala's son Trilochanpala. Jasapala, the last Gurjar ruler of Kanauj, died in 1036. The other dynasties which were gaining power were Chola dynasty and Chalukya dunasty.