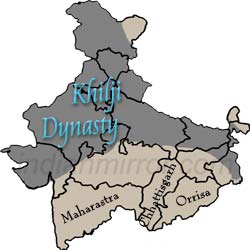 After the death of Balban and downfall of Slave Dynasty another Turkish ruler from Khiliji in Afghanistan came to Delhi to rule Delhi Sultanate. It was called as Khiliji Dynasty. Khiliji are a tribe of mixed Afghani/Turkish descent. Jalal- ud- din Khiliji ascended the throne in the year 1290. He ruled from 1290-1296. Jalal-ud-din Khiliji built kilokhri and made it as his capital city. Jalal-ud-din was by nature soft and generous. Even after defeating many rulers Jalal–ud-din never punished the rulers. Jalal-ud-din had kept a good check on Mongol rulers. When Jalal-ud-din took the reigns he was 70years. Later he was killed by his cousin nephew Aladdin Khilji in a conspiracy. 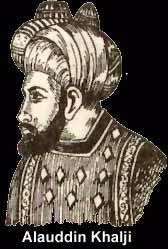 Alauddin Khalji was born as Juna Mohammed Khiliji in Brihum district. Alauddin Khaliji later took over the reigns after his uncle Jalal-ud-din’s death in 1296. He was very successful ruler who invaded South and conquered many parts of India. In his expansion of kingdom, Aladdin was assisted by Malik Khafur and Khusrav Khan. They led Aladdin in many conquests including plundering of Gujarat in 1297AD. Due to it's huge wealth Aladdin sent an expedition under the head Ulghu Khan and Nusrat Khan to Gujarat. On the way back Ulghu Khan conquered Jaisalmer. Some of the important conquests of Aladdin are Ranthombore(1301), Chitor(1303), Warangal (1305) and overthrew the Hoysala Dynasty. Aladdin struck at the power of nobles and took four important measures

·He forbade the nobles to visit each other. Their private meetings were banned and no marriage alliance between the two nobles families without the permission of the King.

Confiscation of all lands given to the Chiefs and it's religious endowments. As per the decision all grants of land and pensions were revoked. The nobles who held the land as gifts, pensions were confiscated. Aladdin carried strong revenue reforms as well. The maintenance of huge army by Aladdin was one of the special features of his rule. Some of the important reforms were

Markets for different goods were created and officers were appointed for maintaining quality, weights and measures.

Safety along the trade route increased. This helped traders from getting robbed.

Aladdin started a new department in the revenue administration called as Diwan I Mustakhraj.

After when Alauddin Khiliji was bed ridden, Malik Khafur who was much stronger than his sons grabbed the throne. During a bloody coup many Khiliji prince were killed but their bodyguards were able to resist Kafur and killed him. Aladdin Khiliji died in 1316 AD. Qutb-ud-din Mubharak shah succeeded him. The last ruler of Khiliji in India was Qutb-ud-din Mubharak Shah. He was the weak ruler, during his reign all taxes and penalties were abolished. He also released all the prisoners of war. Ultimately he was murdered by Khusrav Khan and thus ended the Khiliji Dynasty in India. 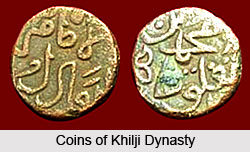