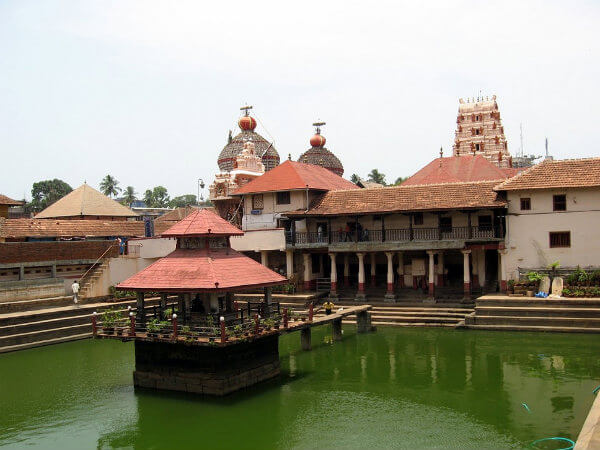 Udupi is another important pilgrimage and tourist place located in Karnataka India. It is known for the Asta Matha and of course Udupi Cuisine.  Udupi is also known as temple town, Parashurama Kshetra and is worldwide famous for the kanakana Kindi in the Krishna temple. The city is also called as Shivalli and Rajata pettha. Thousands of visitors visit Udupi especially during Paraya that is held ones in two years. Udupi experiences hot weather during summers where the temperature is above 350c and pleasant during winters. It experience good rainfall during monsoon season.

It is a most important Hindu temple dedicated to Lord Krishna and for Dvaitha sidhanthas (philosophy). The Matha was founded by saint Madhwacharya in 13th century. Sri Krishna Mutt is located in the main town of Udupi and it is around 60 km from Mangalore. The temple is considered as one of the most important pilgrimage place in South India. Thousands of pilgrims visit this temple which is like an ashram to take the blessings of Lord Krishna. 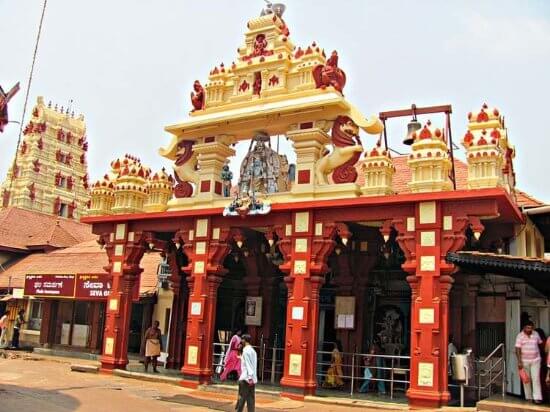 The temple/Mutt has a very interesting history. According to the mythological books, it is believed that Lord Krishna’s idol at Dwaraka was completely immersed in sandalwood paste or Gopichandanam. A sailor who took the heavy lump of sandalwood started to move towards the west coast.  When the ship was sailing in the western coast of Malpe it was caught in a huge storm.

Saint Madhwacharya who was doing meditation here sensed the danger of for the ship and prayed to Lord Vishnu to calm down the weather conditions. He then got the ship safely to the shore the captain of the ship requested Madhwacharya to accept his gratitude and take whatever he wants from the ship. Madhwacharya accepted the sandal wood piece which was containing the statue of Lord Krishna. Sri Madhwacharya purified the idol of Lord Krishna and installed the idol in the mutt. The pond where the statue was cleansed and purified became Madhava Sarovar and the sanctum where the statue was installed Sri Krishna temple at Udupi.

Sri Krishna mutt is a very temple.  Devotees who come to seek the blessings of Lord Krishna have to see through the inner window which is known as Navagraha Kindi and through the outer window known as kanakana kindi. A silver plated arch is decorated around the kanakana kindi. Kanakana kindi which has nine hole is attached to the wall in Chandrashala Hall. Devotees can sit inside the hall and do meditation and offer prayers to God. Above the chandrasala hall is the raised platform which has a silver roof. The platform holds the traditional deepasthambha.

Towards the right side of the main sanctum is the statue of Saint Madhvacharya while on the other side is the shrine of Panduranga. The holy pushkarni which is known as Madhwa pushkarni is towards the south of the entrance of the temple. The entrance towards the east is usually closed and is opened only on Vijaya Dashmi. The temple opens at 5:30 till -9pm in the evening and the Lord is worshipped through Navagraha Kindi.

Some of the major festivals celebrated here is the Paryaya, Janmashtmi, Madhva Jaanti, Hanumad Jayanti and Navratri.

Places to visit in Udupi 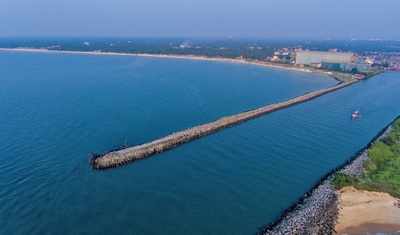 Malpe beach: Malpe beach is located at 6 km from Udupi. It is a very important tourist destination because of its serene clean blue water, green palm trees, golden brown sands makes it a perfect destination for tourists to spend quality time in the beach. Malpe also has a port which is very important port and fishing harbour in Karnataka. The best time to visit is from October to December.

Kaup beach is ocated at a distance of 13 km from Udupi. The beach is famous for its huge light house which was built in the year 1901. The light house is open for the visitors from morning 5:30 m to 6:30 am. The steps steeper as you move upward. The major attractions are the water sports, some eateries shop and a temple dedicated to Goddess Mariamma and also there is a Jain Basadi. The cool breeze and serene climate makes it a perfect place to visit.

St. Mary’s island: Also known as Coconut Island is a wonderful place near Malpe in Udupi Karnataka. It is a set of four islands in the Arabian sea making it one of the most sought of destinations in Udupi. The islands are 6 km away from sea and can be reached by ferry. The ferry suns from morning 8:30 am to evening 5:30pm and can carry 30 persons in one trip. These islands are formed by the Balisitic lava. Out of all the four islands the last island has balisitc rock formation in the hexagonal form and it is the only island of this type in India. It is believed that vasco da gama in the year 1498 landed on st Mary’s island while travelling to Portugal. It is advisable to carry water bottles and sunscreen lotions as the weather may be pretty hot there.

Pajaka: It is a important pilgrimage place for Hindus. It is the birth place of Sri Madhvacharya and is located in Udupi district of Karnataka. It is just 9 km away from Udupi. The important place to see in Pajaka is the house of Madwaacharya and the Aksharbyasa place in this ancestral home. It is believed that who ever does Aksharabyasa for their children at this place then the child will get very good education in its life. There is also Madhva Mandira and many religious ceremonies takes place at this house. Recently there are rooms constructed for the visitors to come and stay. The food served here is excellent and simple udupi cuisine. There are few temples near Pajaka Kshetra which one must visit. The entire pajaka complex is managed by Kaniyooru mutt which is one of the eight mutts what was established by Sri Madhvacharya. 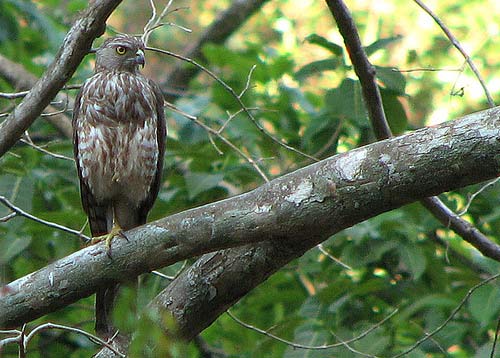 How to reach Udupi

Mangalore international airport which is at a distance of 60 km is the nearest airport to reach Udupi. From the airport one can book a cab or take a bus to reach the place. Udupi is well connected through railways. It is the major station on Konkan railway route. All the major trains from different major cities stop at Udupi.

Udupi is well connected through road. One can take government or private bus or even a cab from major cities of Karnataka to reach the place.