Timings:All days from morning to evening.

Reason for building: As a victory archway

How to reach: Nearest airport is Agra airport which is around 40 km, by rail nearest railway station is Fathepur sikri which is around 1 km. One can also take private buses or cabs from Agra.

Buland Darwaza is a mammoth Indian monument built by Mughal Emperor Akbar for his victory over Gujarat. It was built in 1601 and is the massive and highest  gateway in the world. This mammoth monument is a fine example of Mughal architecture and is built in red and buff sandstone. The red and buff stones are further adorned with  white marble. It can be reached after climbing 42 steps and is the main entrance for the Jama Masjid mosque at Fathepur sikri.

It is at a distance of around 45 km from Agra and around 250 km from the Capital city of India New Delhi. 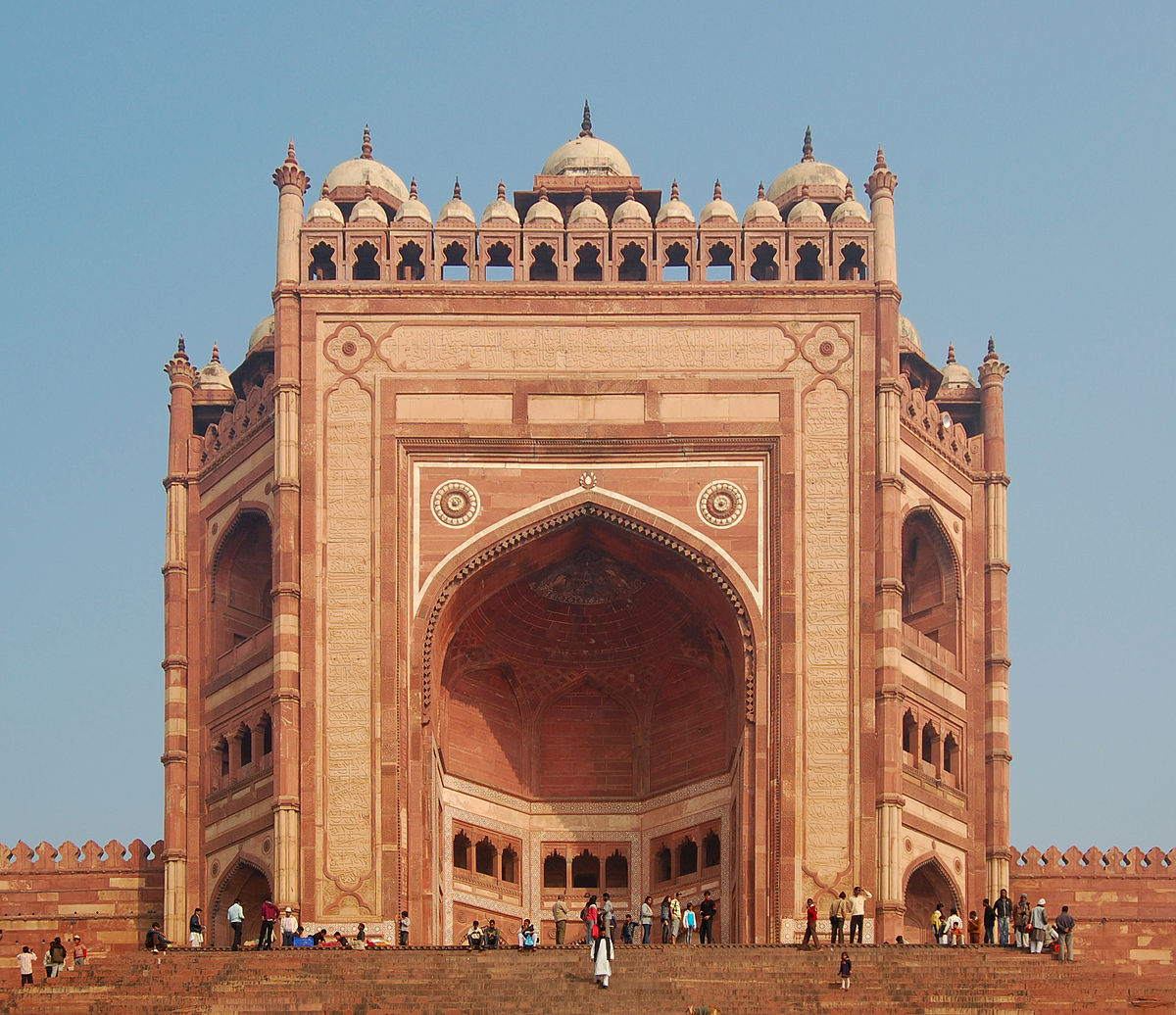 History and Architecture of Buland Darwaza

It was built by Mughal Emperor Akbar to commemorate his victory of Gujarat  in 1573. The monument was built in 1601 AD. The inscription at the centre shows the tolerance of Akbar to all religions. The monument is symmetrical in shape with pillars and Chettris. The pillars are beautifully decorated with carvings and inscriptions from the Holy Quran.

The monument is 53 m in height and 35 m in width. There are 13 smaller kiosks or chhatris on the roof, small turrets and an inlay work of white and black marble. The main arch in the centre has three big domes at the top further the centre arch is divided into three tiers with rows of small arch and flat brackets. 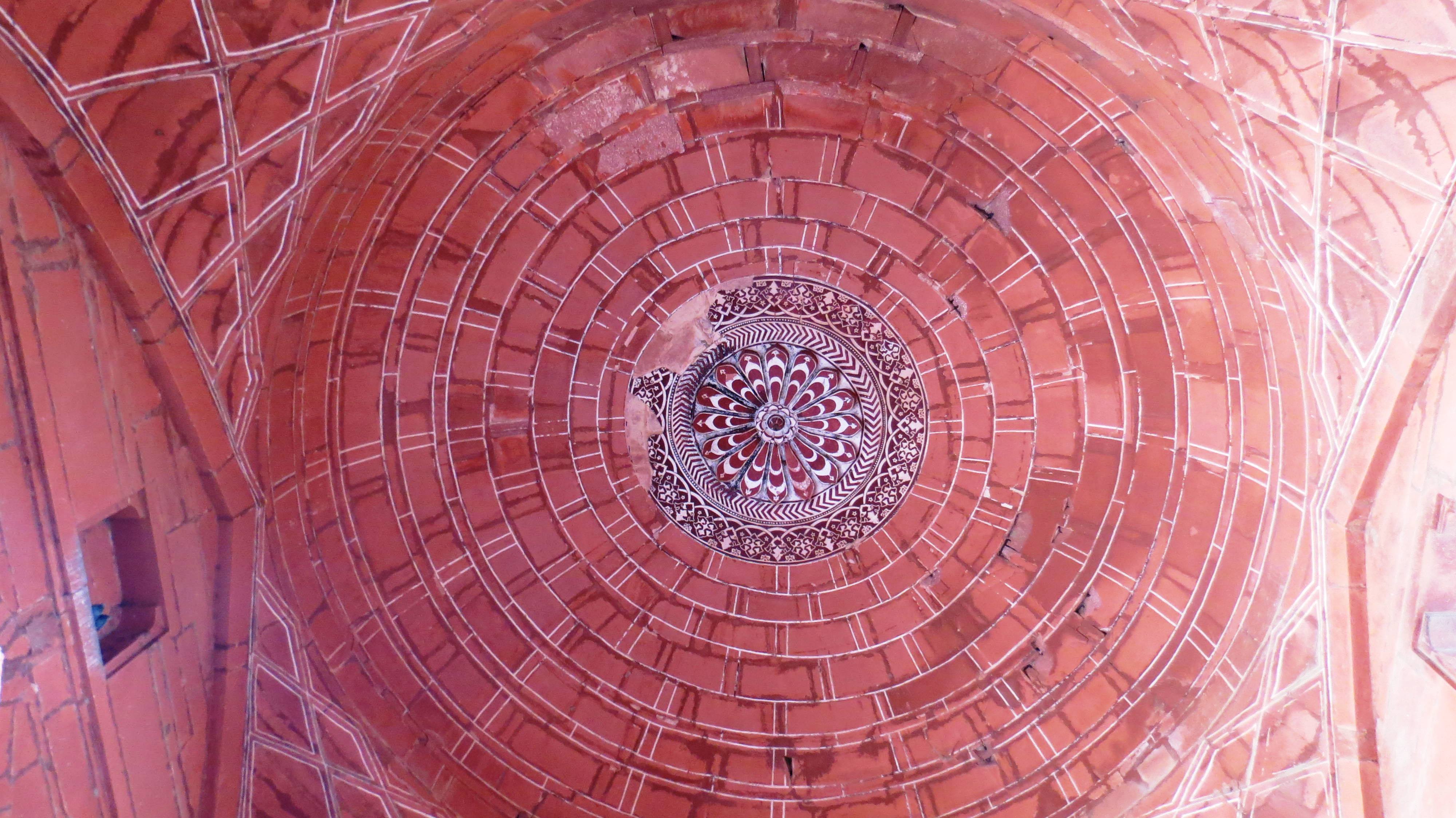 The gateway is surrounded by small turrets. At the tip of the arch it is beautified by white marble which is sculpted by flowers. The central arch has further three small openings which are crowned by a semi dome. The triangular space of the red stone is covered with white marble and a flattish rosette. The white marble is carved with flower-like ornament. The gateway also comprises three horizontal panels that are found in Badshahi Darwaza. The total height of the gate above the pavement is 176 ft. 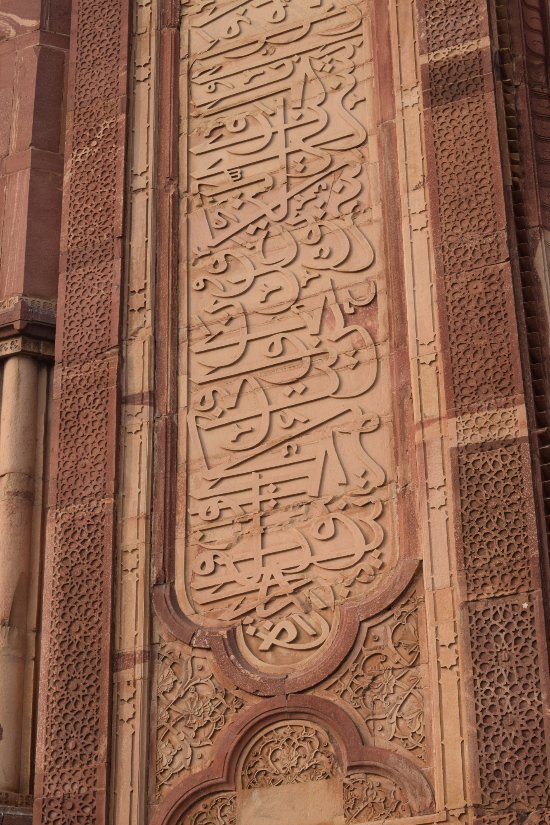 The beautiful carvings and the decorations speak the style of Mughal architecture. On the eastern side of the archway the Persian inscription mentions the victory of Akbar over Uttar Pradesh and victory over Gujarat. There is another inscription which talks about his religious tolerance. This inscription is on the gateway’s central face. There are also verses from Holy Quran that have been carved from the Naskh script along the top of the gateway. It was drawn by Khwaja Hussain Chishti who was a disciple of Sheikh Salim Chishti.

Buland Darwaza is a part of Fatehpur Sikri, which is a UNESCO World Heritage Site, located in the state of Uttar Pradesh.  Summers are very hot and the maximum temperature could reach up to   42°C. The best time to visit the monument is in winters from November to March when the weather is pleasant and cold.

By Air: Nearest Airport is Agra Airport. One can fly to Delhi and from Delhi they can take a cab. It is around 3hours drive from Delhi.

By Rail: Nearest railway station is Fatehpur Sikri station which is very close to the monument

By Road: There are many buses both private and government from Agra and other near cities to reach. One can also drive down from Delhi