Gateway of India is an arch monument built in the 20th century. It is an important tourist place in Mumbai, Maharashtra, India. Gateway of India ( not to be confused with India Gate, Delhi) was built to commemorate the visit of King Geroge V and Queen Mary to Mumbai . Construction of this mammoth structure was  started in the year 1913 and was completed in 1924.

It was built at Apollo Bunder southern part of Mumbai and overlooks the pristine Arabian Sea. It is also popularly known as Taj Mahal of Mumbai and gives a beautiful view of the sea. Before the construction of this monument , Apollo Bunder served as fishing ground for the local residents.

Gateway of India is the connecting point for boat rides to and from Elephanta Caves.

History of Gateway of India Mumbai

The Gateway of India was built to honour and to commemorate the arrival of King George V and Queen Mary to India for the formal announcement as Emperor and Empress of India at the Delhi Durbar in December 1911. Foundation stone was laid on 31st March 1913 by Sir George Syndhem Clarke, the then governor of Bombay. George Wittet was given the sanction in 1914 to start construction at Apollo Bunder which was earlier a  fishing ground. 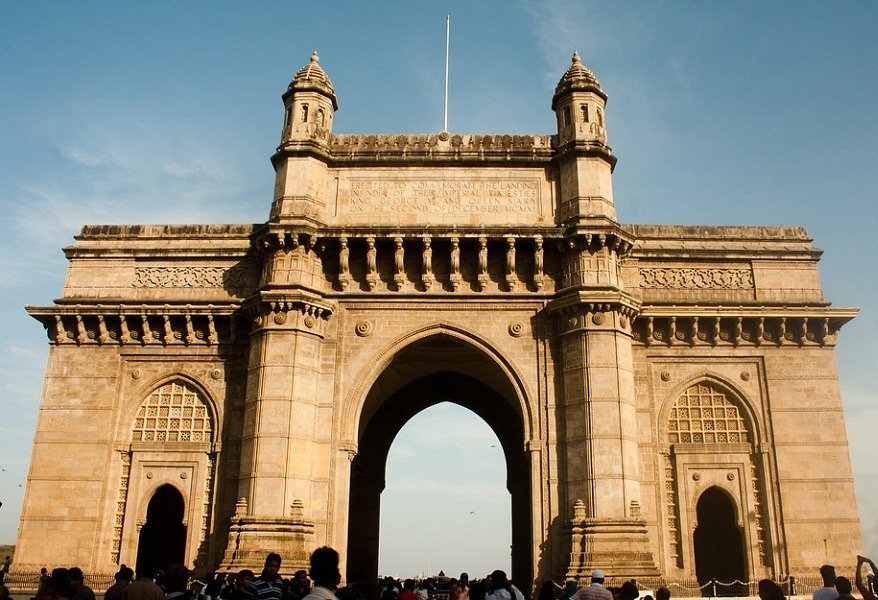 The Emperor and Empress were given a cardboard model of the proposed structure of gateway of India. Initially between 1915-1919 work at Apollo Bunder started to reclaim the land and to construct a new wall along the sea.  The construction of the gateway of India was completed in 1924. Before opening to the public a formal inauguration was done on December 4th 1924 by the then viceroy Rufus Isaacs, 1st Marquess of Reading.

On 28th February 1948  the First Battalion of the  Somerset Light Infantry was the last British troops to leave India through gateway with a 21 gun salute as a part of the celebrations showing the end of British Raj.

Architecture of Gateway of India

Designed by George Wittet, the arch of the gateway has a height of 26 metres with a central dome of 49 feet in diameter. The construction was done by Gammon India Limited. The structure is built of yellow basalt and the reinforced concrete is used in the foundation. The perforated screens were taken from Gwalior while the stones used were locally made.

This huge monument stands strong facing the Mumbai Harbor. It is built in Indo Saracenic architecture with the combined elements of Roman triumphal arch. The total cost of the construction was around 21 lakhs which was borne by the then government. Due to lack of funds the approach road to the monument was never built.

The beautiful rectangular monument has basically three sections. The central dome is joined by four turrets which are decorated by intricate lattice work. There are steps constructed behind the arch of gateway of India which takes us to Arabian Sea.  one can see the beautiful sea with fishing boats and luxury yachts from the gateway. The monument is illuminated at night giving a breathtaking view of the structure along with the sea behind it. There is a hall on each side of the arch which has a capacity of 600 people.

It is at the end of Chhtrapathi Shivaji Marg which is well connected through rail and road within the city. Nearest railway station is Church gate from there one can take a taxi. BEST buses are also available from all parts of the city.

Location of Gateway of India

Just visit and enjoy watching the beautiful gateway of India.