Best time to visit: Due to extreme climate it is best to visit from September to March. Summers are very hot and the maximum temperature reaches close to 45oc

Khajuraho Dance Festival: The Khajuraho Dance festival is held every year in February.  A week long  classical dancers perform on the complex of the temple.

Khajuraho temples are the most elegant and beautiful medieval monuments of our country. It is famous for a group of Hindu and Jain temples located in the Indian state of Madhya Pradesh. The state is known for the beautiful monuments of different periods in the history of India. The sculptures and the intricate carvings on the temple are beyond words to explain.  It can be said that there is no other place or monument other than Khajuraho group of monuments where all kinds of human emotions are being displayed to its best.

The word Khajuraho is derived from the Sanskrit word Kharjur which means date palm and Vahaka means bearer.Most of the temples were built between 950 AD and 1050 by the Chandela dynasty. It is a  UNESCO  World Heritage Site. Earlier the site had a collection of 85 temples but now unfortunately only 25 temples have survived. 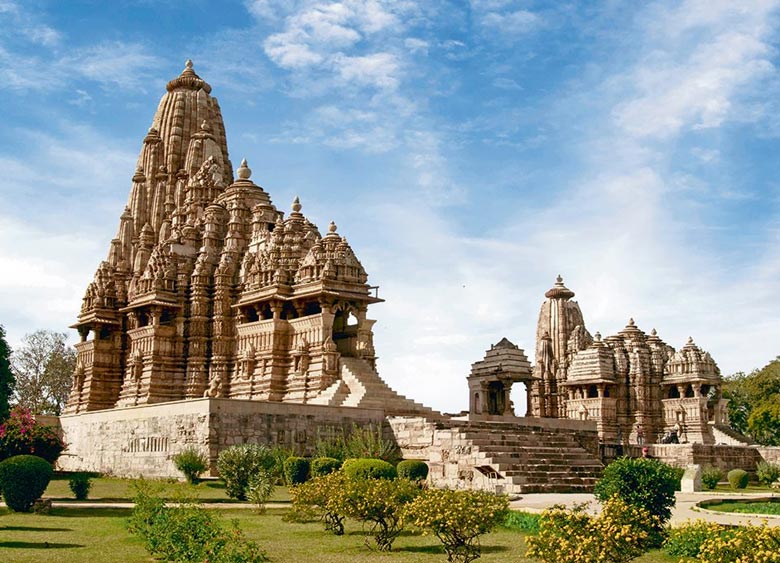 The complex is divided into three categories namely Western group, Eastern and Southern. Kandariya Mahadeo temple is the largest temple which is dedicated to lord Shiva. The Western group and Southern  consists of the majority of Hindu temples. The Eastern group of temples are mostly of Jainism. Most of the temples are dedicated to Lord Vishnu, Shiva, Ganesha and Surya. There are six Shiva temples, eight Vishnu temples and one each of Lord Ganesha and Surya

The temples at Khajuraho were commissioned by the Chandela dynasty. It was built in a span of 100 years from 950 AD to 1050 AD. It is believed that each Chandela ruler has built a temple here in his lifetime. Most of the temples that are surviving even to this day were built during the reign of Yashovarman and Dhanga. 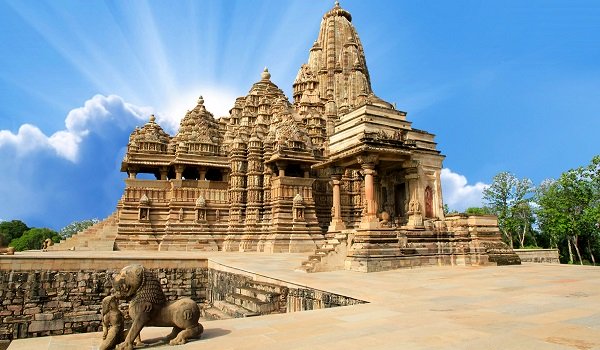 Abu Rihan al Biruni who was a Persian historian and who accompanied Mahmud Ghazini in their attack on Kalinjar in the 11th century mentions Khajuraho as the capital of Jajahuti. The king entered into a deal and agreed to pay ransom to Mahmud Ghazini

The temple complex was safe and grew all through the 12th century but in the 13th century the Chandela dynasty was attacked and defeated by Qutb-ud-din-Aibak of Delhi Sultanate. Later on for most of the centuries the Khajuraho temples were controlled by Muslim rulers. During this period most of the temples were either neglected or destroyed by the Muslim rulers.

In 1830, the temples were rediscovered and restored by T.S. Burt who was a British Surveyor.

Most of the temples were built using sandstone which was readily available in the place. Some of the temples also used granite in the temple construction. Chausath Yogini temple is completely built in granite. While for the foundation granite is used however it is underground and cannot be seen. The columns and epistyles were built with megaliths to get maximum stability.

The Chausath Yogini temple was built between 875-900 CE and has 64 shrines rooms arranged in a rectangular courtyard. The largest temple is the Kandariya Mahadeo temple which is the largest temple built during the period of King Gangadeva who ruled from 1017-1029 CE.

The Hindu temples are built near water bodies which is the culture of Hindu. Earlier there were 64 water bodies out of which 56 have been identified by the archaeologists. The present three water bodies include even a river are the Sib Sagar, Khajur Sagar and Kudhar Nadi (river).

The art work mainly describes the four main goals of life that are considered as necessary in Hinduism include Dharma,  kama, artha and moksha. The temples have intricately carved statues. The Jain temples are located in the southeast region of Khajuraho monuments. While the Chausath Yogini features 64 yogini, Ghantai temple features bell sculptures on its pillars.

Architecture of the Khajuraho temples

The temple is built in the Nagara style of architecture and is divided into three categories. The Western, Eastern and Southern group of temples. Most of the Hindu temples follow the grid design known as Vastu Purusha Mandala. Vastu is the symmetrical, concentrically layered design of the mandala which is laid out encircling the Purusha or the deity. The circle of the Mandala circumscribes the square which is considered as divine.

All the Khajuraho temples except one faces the sunrise and the entrance for the devotee is always towards the east. The mandapas are arranged in symmetrically repeating patterns. Above the vastu Purusha mandala is the dome or the Shikara. All the temples have the garbha griha which has the pradakshina path for the devotees to walk. Larger temples have pillared halls known as mandapas. Most of the temples have 8x8 grid Manduka. The primary deity is located in the grids Brahma padas.

The temple has many repetitive architectural elements some of which are listed below.

Adhishsthana or the Base platform: Usually made of solid block or granite. It is very important for the temple as it holds the weight and  also accentuates the upward thrust of the temple.

Shringa: it is the elevated structure where the deity is placed.

Urushringa: it is the subsidiary tower which is to the sides of the main shikara. It is much smaller and narrower as compared to the main shikara. They help in emphasising the height of the structure and also gives support to the structure. The urushringa often resembles the main shikara and has its own Kalasha and amalaka ( notched stone disk). It is present in Kandariya Mahadeva temple. 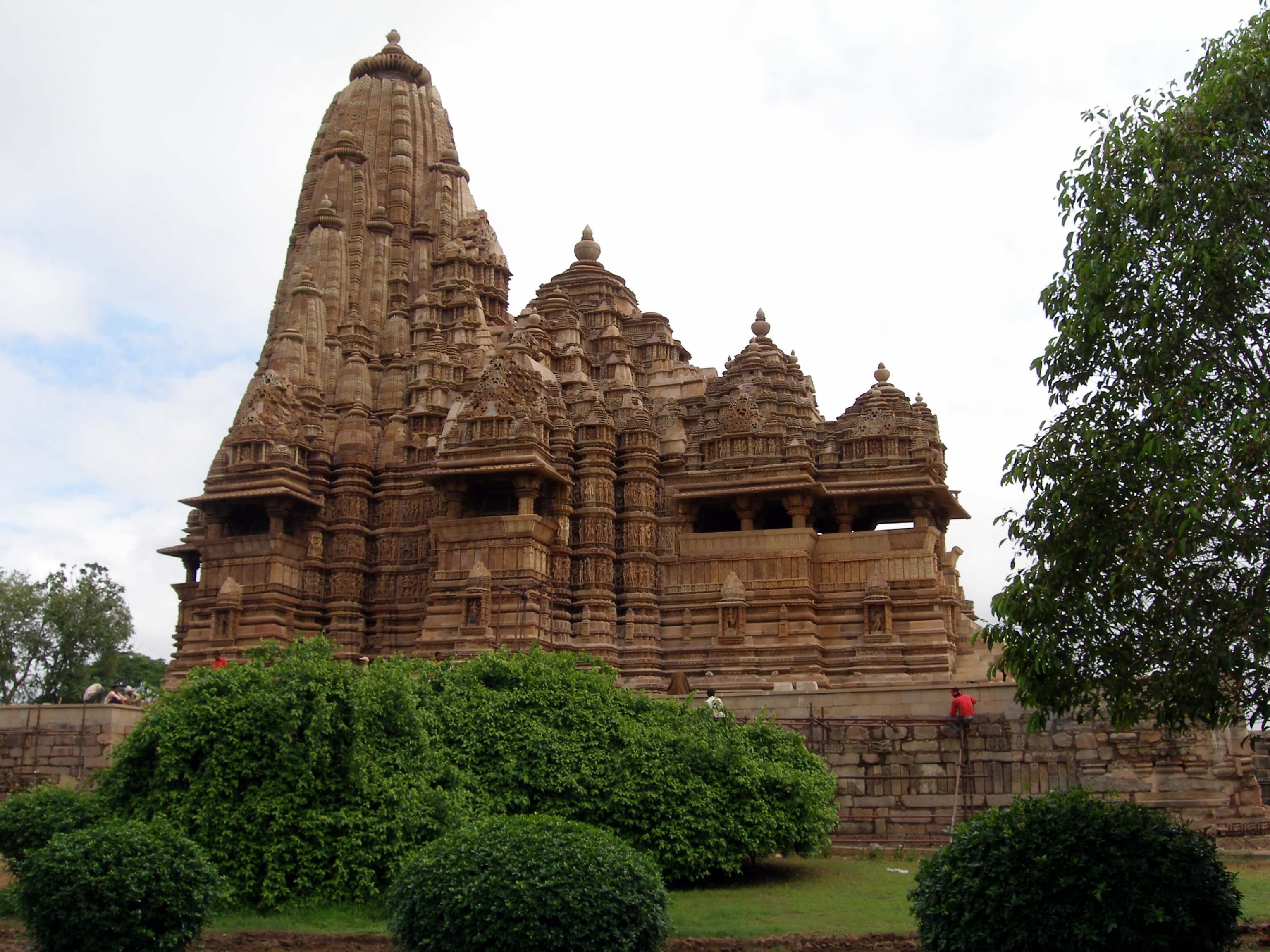 It is one of the largest and most ornate Hindu temples in Khajuraho. It is in the western complex of the Khajuraho which is the largest complex as compared to the other two complexes. The temple is on a huge plinth of 4 metres in height.

The temple has beautiful carvings all around especially the carvings at the entrance displays the quality of the stone and the work of the sculptor. The temple is 31 metres in length and 20 metres in width with the main tower is 31 metres. It is one of the largest and grandest temples that is still surviving in Khajuraho. The temple is dedicated to lord Shiva and the grabha griha has the pradakshina patha.

It is located at the Western group of temples and is a ruined Devi temple. It is dated to around the 9th century and is one of the oldest temples. The temple is classified as a Monument of National Importance by the Archaeological Survey of India.  The temple is built using large coarse granite blocks on a 5.4 metre high platform. The courtyard originally had 65 shrines but now only 35 cells survive now.

This temple was built either in the 9th or early 10th century. It is located on the banks of Khajuraho Sagar Lake. The garbha griha has four faced linga which was mistook as Lord Brahma. The temple is made up of granite. The main door has a sculpture of trimurti at the lintel, Ganga and Yamuna at the base.

It is a 10th century Jain temple at Khajuraho dedicated to Parshvanatha. It has an entrance porch, a small hall, a large hall, a vestibule and sanctum. The outer walls have sculptures which feature dancers, musicians, graceful women. The beauty of the temple is it has a magic square called Jaina square.

It is the famous Jain temple dated to the 11th century. The temple is dedicated to lord Adinath. The temple is classified as a Monument of National Importance by the Archaeological Survey of India. The exterior wall of the temple has three lines of sculptures featuring graceful women, Vidyadhara couples, vyalas, dancers and musicians. Only vestibule and sanctum survive now in the temple.

It is  a Jain temple located in the eastern part of Khajuraho. The temple is dedicated to thirtankara Shantinatha but the temple also has 18 shrines with many Jain images. The temple is declared as a Monument of National importance by the Archaeological Survey of India. The temple has a 4.3 m high statue of Shantinatha.

It is a ruined shiva temple in Khajuraho. The construction of the temple dates back to 900 CE. The temple was built on a lake which is now called as lalguan Sagar. The temple is in pyramid shape and has carvings on the door way. 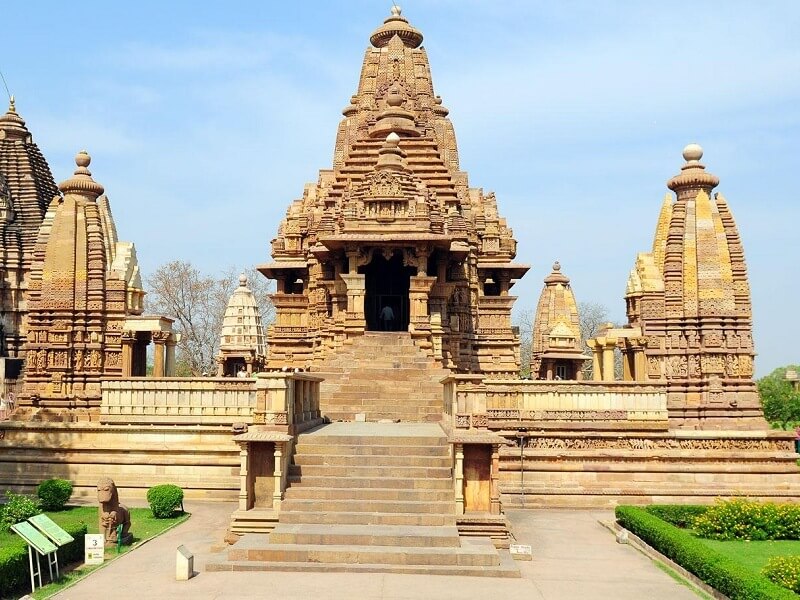 It is a 10th century temple built by Yashovarman. It is dedicated to  lord Vaikunta Vishnu. The temple is located in the Western temple complex Khajuraho. It has garbha griha, antharala, porch, mandapa and Maha Mandapa. The temple has four armed sculptures of Vishnu.

It is located in the Western complex and is a single colossal monolithic image of Varaha. It is the third avatar of lord Vishnu in the form of a boar. The structure of the temple is very simple and is built on a lofty plinth. The statue of Varaha is 2.6 m long and 1.7 m in height. The sculpture is carved with different images on the entire body.

The museum is open from 8 am to 5 pm and remains closed on Fridays. The museum is located near the Matageshwar temple around the Western group of temples.

The light and sound show at the Khajuraho Temple is organised by the Madhya Pradesh Tourism Department. The shows are available in two languages: English and Hindi. The winter timings are from 6.30 pm to 7.25 pm which last from October till February. The summer timings from March to September are between 7.30 pm to 8.25 pm. It is held in the open lawns of the temple complex.

By Air: Khajuraho has its own airport. Major flights operate from the major cities like Delhi, Mumbai, Varanasi and Agra.

By Train: Khajuraho is well connected through train.  There are direct trains from Delhi, Varanasi and Agra. The other option is to reach Jhansi and from there take a connecting bus to Khajuraho