Visiting Hours;  Sunrise to Sunset on all days

Udayagiri and Khandagiri caves are located 7 km from the capital city of Odisha,  Bhubaneswar, India. Earlier these caves were known as Kattaka caves or Cuttack caves. Udayagiri has 18 caves and Khandagiri has 15 caves.

It is believed that these caves were built  in the 2nd century as restrooms for Jain monks by king Karavela of Meghavahana dynasty. It is one of the rarest and interesting monument of India. 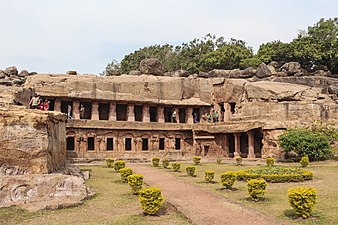 The caves are on two adjacent hills known as Udayagiri and Khandagiri known as Kumari mountain range were built for  Jain monks. According to Hathigumpha inscription out of 117 caves that were built originally only 33 caves are left now in both the hills.

The architecture and the beautiful carvings in these caves are beautiful and the sculptures are carved by using simple basic tools. The carvings are basically from mythology and history. One of the important carvings is the depiction of the kalinga war. The caves which served as rest rooms for Jain monks had water in a small canal which passed through every cave, a place to light the lamps. Many caves are double storeyed and it is believed that the upper chambers were used for doing meditation. 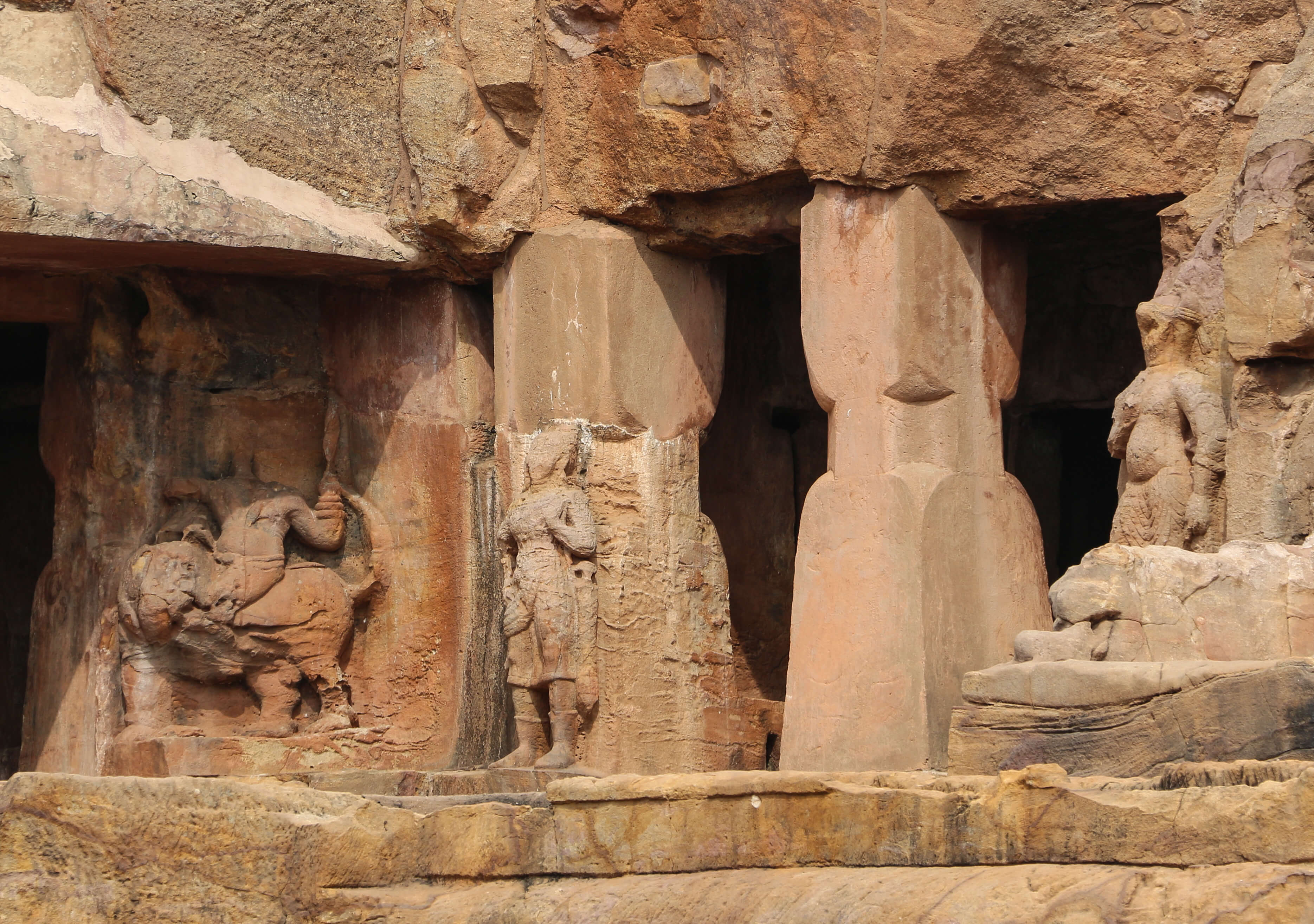 Cave 1 or the queen cave is the double storey structure. Each storey has three wings and the central wing is bigger as compared to the other wings. The  right wing of the lower storey has three entrances with pillared verandahs. This cave is cut on three sides of a quadrangle with fine wall friezes. The entrance wall has carvings of animals, royal scenes and toranas.

Most of the cells are carved with dwara pala images. The central wing has four cells and the space which connects the right and the left wing with the central wing is beautifully decorated with sculptures of animals, women playing musical instruments, human tree, monkeys and many more. The toranas have Jain religious symbols like snake and lotuses.

It is called as Bajaghara Gumpha is very small and simple.other than the rectangular shaped pillars there is no other sculpture in the cave.

It is known as Chota Hathi Gumpha. It has six small elephant figures with a statue of a guardian.

It is known as Alakapuri gumpha. It has a beautiful sculpture of a lion holding a prey in its mouth.

Cave 9 is known as Mancapuri and swargapuri gumpha. It is a double storey cave wherein the cave has two male figures and two female figures worshipping the kalinga Jina.

Cave 10 is Ganesha Gumpha: it got its name due to the carved figure of Ganesha on the back of its right cell. It also has a Jain Thirtankara at worship position and also has sculptures of elephants. One can see the carved figures of dwara palas at the entrance.of the cave.

Cave from 11 to 18 are called as Jambeshvara gumpha, Vyagraha Gumpha, Sarpa Gumpha, Hathi Gumpha, Dhanagarha Gumpha, Haridasa Gumpha, Jaganntha Gumpha, Rasui Gumpha. Cave 11 is very small and the inscriptions on it tell us that the cave is of a Nayaki. Cave 12 is in ruins now and has a large mouth like a tiger. The word Vyagraha means tiger. Cave 14 is a natural cavern and the inscriptions erected during Kharavela are found in this cave. The word hati means elephant.

Khandagiri has 15 caves among them cave 1 and 2 are richly decorated with guards at the entrance and also two bulls and two lions. Parrots are also carved above the arch.of cave 1 and hence it is called tatowa Gumpha. Even cave 2 is known as tatowa gumpha.

These sculptures were added only in 11th century by Somavamshi Dynasty. Cave 8 is known as Bharabhuji Gumpha and has sculptures of 25 tirthankaras on the walls of the cells. Caves 9,10,11 are known as Trusula Gumpha, Ambhika Gumpha, Lalatendu Keshari Gumpha. Cave 12,13 and 15 have no names and cave 14 is known as Ekadashi Gumpha.

Inscriptions in Udayagiri and Khandagiri Caves