Another classical story from the collection of Akbar and Birbal Stories.

Akbar was the famous Mughal king who ruled India for many years and Birbal was his favorite minister. Birbal was one of the nine gems of Akbar. Let us read this funny story: “The Four Fools” 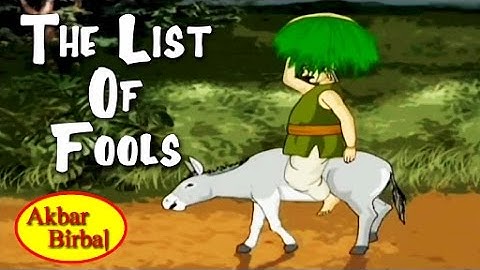 As Birbal started searching for the fools in his kingdom, he came across a brahmin. The Brahmin was having a plate in his hand with rice, gifts and some other food stuff. Birbal was curious to know why he was running. The Brahmin said, “My wife left me and married some other person and now she delivered a baby boy. I am running to give these gifts to the baby and the mother.”

As they moved further in search of another fool, to their surprise they saw a man sitting on a horse and holding the heavy luggage on his shoulders.

Birbal was curious again to know why he was holding the luggage on his shoulders. Birbal stopped the man and asked, “ Why are you holding the luggage when you are sitting on a horse ?”  The man replied, “ My horse is a mare and she is pregnant. I don’t want to trouble her during this period by carrying heavy luggage.”

Birbal thought of him as his second fool. Birbal asked him as well to accompany him. All three reached the palace. Birbal said, "Here are the two fools whom you had asked.”

Akbar said, “ I had asked you to search for four fools. But you have searched only two. Where are the other two fools? Birbal said, “ My lord, please excuse me, the third fool is you and the fourth is me. You asked me to bring fools from our kingdom. Only a fool will search for a fool. I am the fourth fool as I searched for these two fools. The emperor burst out laughing and enjoyed Birbal's witty nature.