Another interesting story from Hitopadesha tales which teaches us not to trust anyone and we should be careful with people who become friends only to fulfill their selfish desire.

Once upon a time in a thick forest there lived a lion. Some of the animals and birds like crow, jackal and wolf had made the lion as their best friend. All three were very selfish and made a lion as their friend only to protect themselves from getting attacked by any fierce animals. 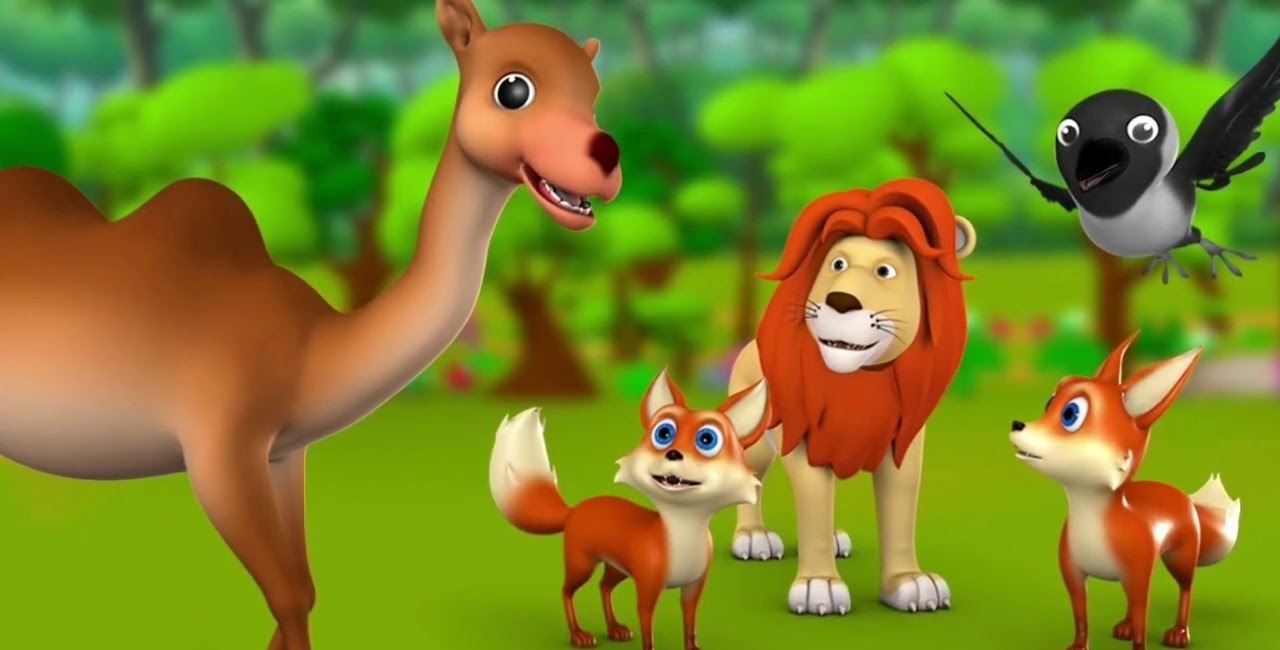 One day a camel lost his way going home and reached the same forest where the lion and his friends were living. Poor camel, how much he tried he could not locate his route for returning back. The camel was very worried as the wild animals in the forest can attack  and kill him.

The three friends who were passing in the forest noticed the worried camel searching for his route to go back home. The three friends were very happy as they thought  the camel could become good food for them and the lion.

The Jackal said, “  Friends, camel do not belong to our forest. He can be a good food for us. Let's kill him and eat.” The wolf said, “ My dear friend the camel is a big animal and we are small animals. We cannot kill him. We should inform our leader, the lion, about the camel.” The crow completely agreed with what the wolf said. All the three went to the lion.

Upon reaching the lion's den the jackal said, “ Your majesty,  A camel has entered our forest with your permission. He is very huge and full of flesh. He can be a good food for all of us. Let's kill him.” The other two friends also repeated the same thing to the king.

Hearing this the camel got very scared. He knew that the lion is the king of the forest and is a very ferocious animal. The camel further thought that the lion would kill him and eat him.

But the camel had no other choice but to agree to meet the lion. The camel walked along with the other three friends and left everything to destiny. As they approached the lion's den, the camel was getting very scared but he had no other option.

The lion truly behaved like a king and welcomed the camel to his forest. The lion said, “ My dear friend, I heard you have lost your way back home. You can stay here safely till you find your way.”  The lion assured safety for the camel till he lived in the forest.

One day when the lion was hunting for food he got very badly injured with the wild elephant. Even though the lion got badly injured, he still managed to kill the elephant. The lion was not able to go hunting as he was severely injured.  The lion and his dependent friends starved without food for many days. But the camel had no problem as he was satisfying himself while grazing.

All the three friends were worried and approached the lion. They said, My dear Majesty, You are becoming weaker day by day. We can't see you like this dying. Why don't you kill the camel and eat him?” The lion was very angry hearing this. He said, “ Come what may I will not kill our guest. It is against our principles.”

All the three were very upset again and thought of a plan to kill the camel. They went near the camel and said, “ My dear friend, you know our king lion has not eaten anything for many days now as he is unable to do hunting. If the same thing continues then he will die in a few days.

It is our duty now to take care of our king. Let us offer our body to him so that he can eat us and get healthy.” The camel who was innocent did not understand their plan but agreed to what the other three said.

All of them went to the lion den and the first crow came forward and said, “ My dear king, please kill me and satisfy your hunger. The lion got upset and said, “ How can I kill my own friend? I would rather die and not kill you.

Later both Jackal and wolf came forward and said, “ my dear king eat both of us as crow is a very small bird and it won't satisfy your appetite. If you eat both of us then your hunger will be satisfied and you become healthy.”

The lion was very upset and said, “ My dear friends, I reject your proposal.”

The camel who was watching all this thought the lion would not eat him and went to offer himself. The camel said, “ My dear king, please accept my body to eat. I am huge and can fulfill your hunger.”

The lion thought he was not breaking his principles as the camel himself had come and offered his body. The lion at once pounced on the camel and killed him. The lion and his friends killed and ate the flesh of the camel for many days.