An old Tiger and Greedy Traveller

An Old tiger and greedy traveller

Another classical story from the Hitopadesha tales. This story teaches us not to lose our senses at the cost of greed. Once upon a time there lived an old tiger in a dense forest. The tiger was feeling hungry and as he grew old the tiger was finding it difficult to hunt.

While roaming around the forest in search of food the tiger came across a gold bangle lying on the banks of a lake in the forest. The tiger, which was very intelligent, thought of a plan and decided to lure someone who passed near the lake. Soon a traveller was moving on the opposite side of the lake.

The tiger was very happy and thought to himself, “ What a delicious meal this man will be. I need not have to hunt for another three or four days as this man would be sufficient for some days.”

The tiger in order to attract the man kept the bangle in his paws and called the man. The tiger said, “ Oh traveller I found a gold bangle in the forest. It is of no use to me. If you want you can come and take it.” 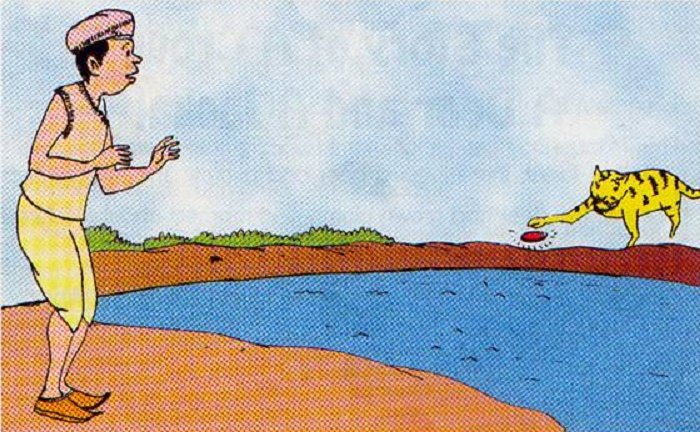 The traveller on seeing the shining gold bangle became very greedy and wanted to take the bangle. But he was also very scared as the tiger would kill him if he went near him. The traveler said, “ Oh beast, how can I believe you ?You are a beast and I know you will kill me as soon as I come near you.”

Hearing this the tiger said, “ Don't be afraid of me. I have become very old now. I don't have the same stamina or energy which a young tiger has. My paws are not sharp any more, they have become blunt. Now I have taken sanyas and have given up all evil activities. I am all alone now and doing only good deeds.

Read the moral of the tiger and greedy traveller

The greed over took the travelers mind and he believed the tiger words. He jumped into the lake. The lake had a marshy patch and while swimming in the lake the traveler got stuck in the marshy patch. The tiger said, “Oh my dear friend do not worry I am coming to help him and take you out of the marsh.” The tiger came close to the traveler and seized him.

The traveler at once realized that he was being trapped and the tiger was lying to him. He realised that a beast is always a beast and his greed for gold overtook his thinking capacity. The traveler thought, “ If I had not become greedy, I could have been alive now. But it's too late.” The tiger killed the traveler and ate him. The tiger was happy as he did not need to go hunting for another few more days.