Another interesting story from Hitopadesha tales which teaches us that destiny of anyone cannot be changed.

One day as the sage was closing his eyes and doing meditation. At that time a kite dropped a baby girl mouse in the lap of the sage. The sage who was deeply engaged in meditation got up with a shock. He saw a mouse in his lap. 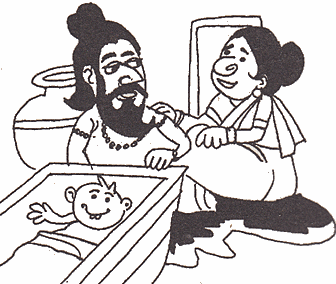 Time passed and the girl grew into a beautiful young girl of sixteen years old. The sage’s wife decided to get her daughter married. She requested her husband to look for a suitable groom for their daughter. The sage accepted what his wife said.

Her father was very disappointed. He asked the sun god to suggest a suitable groom for his daughter. The Sun God said, “ Probably the lord of clouds would be a perfect match to your daughter as only a cloud can stop the rays of the sun.”

The sage was very happy and asked the Lord of clouds to marry his daughter. But the girl refused, saying, “ How can I marry a dark person like him. I am so beautiful and he is so dark. I am also very scared of the thunder he generates.”

The sage was very disappointed and asked the clouds if they could suggest a suitable groom to his daughter. The clouds said, “ The Lord of Wind can make a good match for your daughter as he can even blow me away.”

The sage was very happy and prayed for the lord of Wind. The sage asked the wind to marry his daughter. But again the girl refused to marry the wind and said, “ O Father How can I marry such a slender person. The wind doesn't stay in one place, it always keeps moving.”

The sage was very upset and asked the wind if he could suggest a suitable groom for his daughter. The lord of wind said, “ Probably Lord of Mountain could be the perfect match. He is strong and stays at one place. He can also easily stop the strong wind blows.”

The sage prayed to the lord of Mountain and asked if he could marry his daughter. But the girl again refused to marry a mountain saying, “ I cannot marry a mountain as he is too cold and keeps blowing cold winds.” She asked her father to find a softer groom for her.

The sage who was very tired asked the mountain if he could find a suitable groom for her. The mountain said, “ Marry your daughter to a mouse as he is soft and can also make holes in the mountains.”

Moral: No one can change the destiny of the person.