The Mice that ate Iron

A classical Panchatantra story which teaches us that “never try to  deceive anyone”.

Once upon a time in a small village there lived a rich merchant by name Naduk.  He was very happy as his business was flourishing. The village was on the banks of a river. It was monsoon season and due to heavy rains the river flooded the whole village.

The villagers lost all their crops, houses and damaged many factories. Poor Naduk lost everything in this flood and suffered heavy losses. Many villagers started moving to other villages in search of food and jobs.

Even Naduk decided that he should go to some other village and try his luck. He sold whatever he had but was left with only iron balance. He did not want to sell that as it belonged to his ancestors. 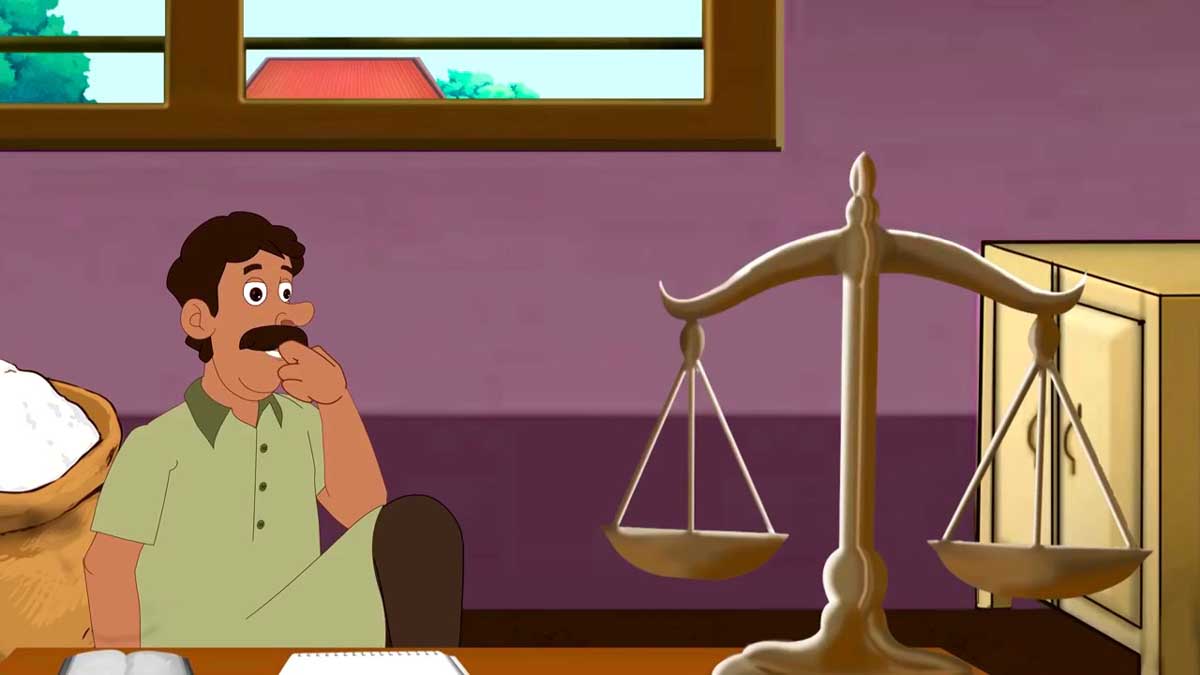 Years passed,  Naduk went to different places and earned a lot of money by doing business. He decided to return back to his village and start the business again.  Naduk reached his village with a lot of wealth. He went to his friend Janak house to take his iron balance back.

Both of them exchanged their happiness for hours. When he was about  to leave Naduk asked Janak if he could return his iron balance.

Janak kept a sad face and said, “ My dear friend, I had kept the iron balance very safe but as you know my house is filled with a lot of mice. All the mice ate the iron balance. I am really sorry my friend.”

Janak knew that the balance would fetch him good money so he did not want to give it back.

Naduk knew his friend was lying and thought, “ how can  mice eat iron?” Naduk immediately thought of a plan and kept his mind calm. Naduk said, “ Don't be sorry my friend Janak. It is not your fault. These mice have created problems for all.”

Naduk knew his friend was lying. Before leaving his house, Naduk asked Janak if he could send his son along with him as he had bought some gifts for Janak.

Janak happily agreed and asked his son Ram to go along with Naduk to his place. Naduk, who had thought of a plan, locked Ram in a room inside his house. It was getting dark, Janak was worried as his son had not returned home from Naduk’s place.

Janak decided to go to Naduk’s house and enquire about his son Ram. Janak came to his friend's house and asked Naduk about his son. Naduk  was well prepared and  replied, “My dear friend, I am very sorry as we both were coming home when a hawk came down and took away your son.

I tried my best to stop but could not.” Janak, who was very sad and angry, shouted, “ How can a hawk carry a young boy? I know you are lying. Tell me where my son is, otherwise I will go to the village panchayat.”

Naduk kept saying that the hawk carried his son. Janak went to the village panchayat and narrated the incident.

The head asked Naduk to tell the truth. Naduk claimed that the hawk carried  away his son. A big fight took place between Naduk and Janak. The head of the panchayat ordered Naduk to return his son. Naduk said, “ My lord, how can I return when a hawk has carried away his son.”

The head of the panchayat got very angry and shouted at Naduk to stop lying as a small bird cannot carry a fifteen year old boy.  Naduk said, “ My lord, If mice can eat iron balance then even a hawk can carry a boy.” Finally Naduk narrated the whole incident of his iron balance to the village panchayat.

Also check some of these interesting pages

The head of the panchayat burst out laughing and ordered Janak to return his iron balance. Janak apologized to Naduk for his mistake and returned the iron balance to Naduk.  Even Naduk returned his son back and both remained friends again.

Moral: Never try to deceive anyone.