Lion that Sprang to life

Lion that Sprang to life:

Another classical story from Panchatantra which shows that even though a person can be very intelligent but without common sense the knowledge is of no use.

In a village there lived four boys who were very close to each other. Among them three boys were very intelligent and had gained knowledge in science. But they had no common sense. The three boys also had no practical knowledge.

The fourth boy named Shubhuddhi was not intelligent and had not gained any knowledge in science or arts. But he had common sense. 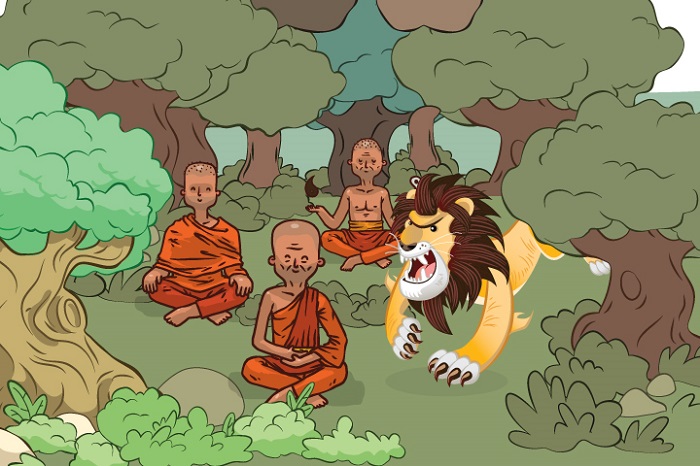 One day all the three learned friends held a meeting and decided to move to different places to earn money from their knowledge. They didn’t want to take the fourth boy as he had no knowledge. But then the three decided to take their fourth friend with them as it would not be good if they didn't take him.

The four friends packed their bags and set out for a long journey. They moved from one village to another village in search of a good job. While traveling from one place to another they entered a dense forest. In the forest they saw a large number of bones lying under a tree.

Check out some of the other pages

The three boys decided to test their skills but however the fourth dumb boy advised his friends as to not to do anything with the bones.

One of the friends said, “ Dear friends, this is the right opportunity to test our skills. Let us try to arrange these bones and give life to the animal.”

Hearing this the fourth boy said, “ Please friends don't do such a thing as the animal may come and kill you.”  None of his friends were interested in listening to his words and decided to bring the animal back into life.

Also check out these beautiful places

The third boy decided to use his knowledge and put life in the lion. At this stage the fourth boy shouted and said, “ Dear friends, If the lion comes back to life it will eat all of us. Please don’t make such a mistake.”

The other three friends ignored their friend's warning and decided to give life to the lion. The third boy went close to the skeleton and started to chant the mantra to bring the lion back to life.

Seeing their foolish friends' behavior the fourth friend ran and sat on the top of a tree. As soon as he started chanting the lion sprang to life and killed all the three friends. The fourth friend felt very bad for what happened and went back to the village and narrated the whole incident to the villagers.