The Birds and Shivering Monkeys

The birds and  shivering monkeys:

A very nice story from Hitopadesha tales which makes us understand  not to give advice where it is not required.

Once upon a time there was a big tree next to a river. The tree had many branches. Many birds had made their nests and were living on the tree with their families. The tree was giving shelter from scorching sun and also during monsoon season.

It was monsoon season and it started to rain heavily. The birds in the nest came out and enjoyed the rain by flapping their wings. There were some monkeys who were playing near the tree. They  got fully drenched in rain and ran for shelter. They came and sat under this big tree. 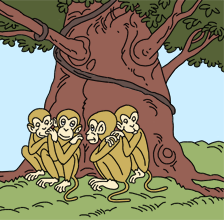 Monkeys started to shiver and cold rain water had soaked their whole body. The birds who were sitting on the tree saw these monkeys shivering and felt very bad for them.

One of the birds said, “ My dear  monkey, If you had built a home like us then you would not have shivered like this. You need not suffer like this if you have your own home. Look at our nest. It is built in twigs and grass. If we tiny birds can build with only beaks then you can make a big home as you have two legs and two hands.”

The birds advised with good intention thinking that the monkeys remain safe in their house. However the monkeys thought that the birds were teasing them. They were annoyed with the advice and decided to teach a lesson to the birds.

The monkeys were waiting for the rain to stop. As soon as the rain stopped all the monkeys went on the branches and broke the nests of the birds. They threw the eggs and the babies to the ground and killed them. The birds got very scared and started flying away from the tree. All the birds were very hurt because many birds lost their babies.

The birds realized that they should give advice to anyone until it is asked. Advice should be given to those who are worth it and who ask. After many months the birds came back to the tree and built new nests. But this time they never gave any advice to anyone.

Moral: Never give free advice to anyone.