Guru granth Sahib also known as Adi granth is the holy scripture of Sikhism. It is regarded as the eternal Guru after the ten human Gurus. It is the collection of around 6,000 hymns of various Sikh Guru’s with 1,430 pages and 5,894 line compositions. It is written in Gurmukhi language and was standardised by Guru Angad in the 16th century.  It was completed in 1604 and was first installed in Golden temple Amritsar on 1st September 1604. Baba Buddha was the first granthi ( ceremonial reader of Guru Granth Sahib)  at Golden temple India.

Guru Granth Sahib was bestowed with Guruship by the last human Guru Gobind Singh Ji in 1708. The holy scripture is placed at the centre on an elevation in all the Gurudwaras (Sikh temples). It is ritually opened in the morning and is closed at night. 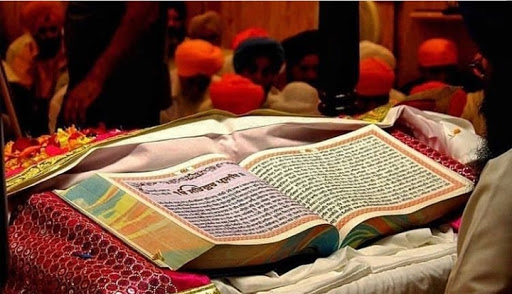 Guru Nanak through his hymns and preachings encouraged and uplifted humankind to lead a peaceful, spiritual and righteous life. These hymns were sung by his followers in a musical way. The first version was compiled by the 5th Guru Arjan in 1604. The first version had hymns from all the first five Gurus along with his own and devotional sons of both Hindu and Islamic saints.

Guru Arjun’s brother Prithi Chand composed hymns and passed those hymns in the name of Guru Nanak. Guru Arjan who came to know this spurious act of his brother standardised the original hymns of all the first five Gurus and started circulating the original across the Indian subcontinent.

The first word in the Guru Granth begins with “ Ek Onkar” followed by Japji (recital). From the first word to the tenth word “ Guru Parshad” it is called “ Mool Mantra.” After this is the rest of the composition called as Japji composed by Guru Nanak Dev Ji. It contains 38 stanas which is one of the morning prayers of Sikhs.

Nitnem: It is the collection of hymns of different Gurus to be read daily by the common people at least three times in a day.Nitnem usually include Panj Bania and sometimes include Rehiras Sahib and Kirtan Sohilla ( for night). The morning and the evening prayers should be followed by a set of prayers known as Ardas. The five Banis or the Panj Bania are Japji Sahib- appears at the beginning of the Guru Granth Sahib

Jaap Sahib--Morning prayers of the Sikh which was composed by tenth Guru Gobind Singh and is found at the start of Sikh scripture Dasam Granth. It is the praise of God and includes names of various Gods in different languages. It is composed of 199 verses and is the first Bani of Dasam Granth.

Tav- Prasad Savaiye--It is a short composition which contains around 10 stanzas and is present in the pages 13 to 15 of Dasam Granth.

Anand Sahib-- It is the collection of hymns written by Guru Amar das Ji who was the third Guru in Sikhism. It is available from page 917-922 in Guru Granth Sahib. It is chanted at all the religious ceremonies of the Sikhs

Rehras Sahib is the evening prayer of Sikhs which is a part of Gurbani ( Hymns in the central text of Guru Granth Sahib).  It contains hymns of four different Gurus Guru Nanak, Guru Amardas, Guru Ramdas, Guru Arjan Dev and Guru Gobind Singh Ji. It gives energy to the mind and body after the day long hard work. It is in a way to thank God for completing the day with no hassles. Rehras contains hymns from  So Dar and So Purakh, Chaupai Sahib, Anand Sahib and Mundhavani. Chaupal Sahib is taken from Dasam Granth.