Guru Nanak Dev Ji is the founder and the first of the ten Sikh Gurus of Sikhism Religion. He was born in the year 1439. His birth is celebrated as Guru Purab on Karthik Poornima between October- November which falls on a different date every year. His teachings expressed through devotional hymns are still followed by the Sikh community. Sikhism is considered as one of the Indian Religions along with Hinduism, Buddhism and Jainism in India.

Born in a Khatri family his father was an accountant for crop revenue and mother was a religious woman. As a child Nanak was blessed with many religious beliefs. All the teachers and elders who knew Nanak were surprised with his vast knowledge on religious and divine matters.

Visit Site Map for all the pages

At a very young age in the year 1487, Guru Nanak married Mata Sulakhani and they had two sons Sri Chand and Lakshmi Chand. He stayed in Sultanpur until 1500. One morning as usual Guru Nanak went to the river to take bath and do all other rituals.

But he did not return for three days. It is believed that Guru Nanak heard the voice of the God asking himself to dedicate his life for spirituality and service to humanity. When he returned home after three days he first spoke and said  “ There is no Hindu or Muslim.”8

These words were the beginning of his teachings and his life of spiritual talking.

Nanak who came to be known as Guru Nanak undertook four major spiritual journeys across India.Later he founded Sikhism religion and the followers of this religion came to be known as Sikhs. During his travels he preached the concept of God as Supreme, Nirankar,Nirbhau, Nirvair and Sai bhang. Guru Nanak promoted equality among all irrespective of caste, creed, male and female.

After returning from travel Guru Nanak settled in Kartarpur village on the banks of River Ravi in Punjab. It is believed that the village was actually built to honour Guru Nanak.  His followers came from different parts of the country to listen to his preachings and to take his blessings. Many of his disciples became permanent residents of the Kartarpur village so that they could always visit Guru Nanak for his advice. 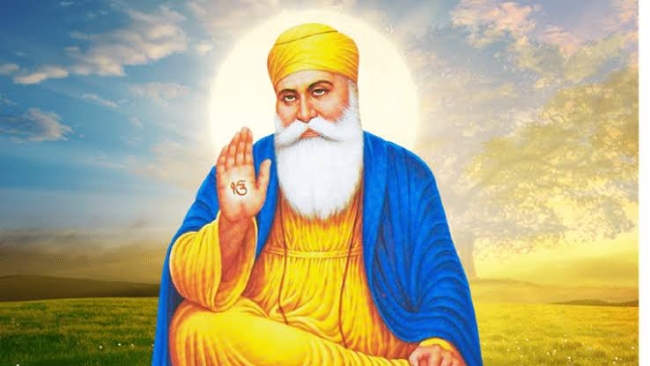 Guru Nanak undertook five different spiritual journeys to spread the message of God and his preaching. It is believed that before he started with his journey Guru Nanak visited his parents' place to seek their blessings and to make them understand the reasons for his journey.  It is believed that Bhai Mardana accompanied Guru Nanak for most of his travels. He visited all the temples, mosques and covered most of India and Pakistan. His first journey took almost seven years.

In his second journey he covered most parts of Sri Lanka, Dhanasri Valley and Sangladip. This journey was between 1506-1513 AD which lasted for seven years.

The third trip was between 1514-1518 AD where Guru Nanak travelled to regions like Kashmir,Nepal, Sikkim, Tibet and Tashkand.

The fourth trip was between 1519-1521 AD where Guru Nanak travelled to the holy place  Mecca and many other places in Arab.

His Fifth and the final trip was between 1523-1524 AD which covered places within Punjab. After this Guru Nanak settled in Kartarpur for the rest of his life.

All his teachings can be found in Guru Granth Sahib. Guru Nanak believed and taught all are equal before God irrespective of caste,religion ,men and women. According to him, rituals and priests are not required to feel the presence of God. God has created the world and to feel his presence Guru Nanak emphasized on equal treatment to all religions.

Guru Nanak formalized on three basic pillars in his teachings:

Naam Japna: To repeat and mediate in the name of God

Kirat Karo: Earn an honest living. To work hard both physically and mentally to earn a good living.

It was composed 50-80 years after the death of Guru Nanak Dev Ji. The four Janam Sakhi that have survived now are Bhai, Mihirbhan, Adi and the Puratan version. Bhai Bala is the most popular and well known Janam Skhis. This is the first Janam Saki and contains the childhood and some miracle stories along with the early adulthood of Guru nanak dev Ji.

Puratan gives more information on the five  spiritual travels undertaken by Guru Nanak in different directions. The hagiographic character of Puratan is well illustrated in Guru Nanak’s visit to Mecca. The last part of the Janam Sakhi gives us information about the settled life in Kartarpur village after all the travel.

These mythological stories do not give any accuracy about Guru Nanak’s life. Of all the manuscripts the most neglected manuscript is the Miharbhan Janam Sakhi. It is understood that Sodhi Miharbhan whose name is associated with Mina sect has given his name to Janam Sakhi. It is believed that Minas were hostile towards Guru during Guru Arjan Dev Ji period hence it is the most neglected among all.

Guru Nanak Dev Ji returned to Kartarpur after completing his five spiritual journeys across different parts of India and world. Guru Nanak Dev Ji had become immensely popular and gained love and respect from Hindus, Sikhs and Muslim community through his preaching. As Guru Nanak approached his final year an argument or dispute arose  among Hindus, Muslims and Sikh community as to who would do the final rites of Guru Nanak Dev Ji.

Both Hindus and Sikhs community wanted to cremate him as per their own traditions and customs. Muslims wanted to bury according to their religion. When all three could not reach an amicable solution  they decided to ask Guruji himself.

All three community members approached Guruji and asked how his remains would be disposed of. For which Guru Nanak asked all three to bring fresh flowers. He asked both Hindus and Sikhs to keep the flowers on the right side of his mortal and Muslims to place it on the left side.

Further Guru Nanak Dev Ji said the permission to perform the last rites would be given to those whose flowers would remain fresh throughout the night.

Next day morning when all three religious members came to see the flowers, to their surprise the flowers of all three communities remained fresh and Guru Nanak mortal remains had disappeared. All they could see was fresh flowers in place of his body.  It is believed that Hindu, Sikhs and muslims picked up their flowers and performed the last rites according to their religion.