Hinduism is an Indian Religion and is the third largest religion in the world. People who follow Hinduism culturally, ethnically or religiously are known as Hindus. One of the oldest religions in the world is Hinduism. Hinduism is widely practiced in India and in some Asian countries.

Purushartha is a very important concept in Hinduism. Purushartha literally means duties of the human being to ultimately attain moksha. The ultimate aim in Hinduism is to attain moksha (salvation) and hence every individual should behave in such manner that ultimately he attains his goal that is moksha.

The above four goals are important to attain the last goal known as moksha. They are interdependent on each other thus any act of fulfilling one objective should also support the other three objectives of life. 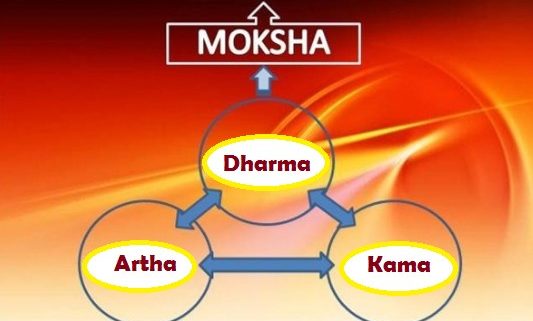 Dharma is the first Purushartha in Hinduism. Dharma is one of the important beliefs in the Indian religions such as Hinduism, Buddhism, Jainism and Sikhism. In Hinduism Dharma is considered as a moral concept that governs the behavior, duty towards fellow human beings and society.

In Hinduism Dharma is a religious and moral law  which governs the behaviour of human beings.  Dharma means power, virtue, duty. Dharma has vast meaning in different religions like Hinduism, Buddhism, Jainism and Sikhism. Hence it is very difficult to provide the exact definition of Dharma. In the ancient texts Dharma means cosmic law.

It is believed by the followers of Hinduism that Dharma was first revealed in Vedas.

Dharma is the power which maintains and balances the society in the universe. Each person has his own duties and Dharma to perform known as Sva Dharma.

In Hinduism Dharma has two aspects known as Sanatana Dharma and Yuga Dharma. Sanatana Dharma means ancient law which is based on Vedas, Upanishads and also incorporates teachings from Ramayana and Mahabharata along with Bhagavad gita. Yuga Dharma is that which is valid for one yuga.

Vatsayana in the fourth century clearly described Dharma in simple terms. He explained Dharma while comparing it with Adharma of the body and also what we speak also Dharma and Adharma of mind.

At an individual level some of the Hindu texts suggest four stages of life as individual Dharmas. The four stages are Bhramacharya, Grishastha, Vanaprastha and sannyasa.

Artha:  Artha means the material aspects of life. Artha is the second important purushartha in Hinduism. Artha signifies the resources that are needed to lead a life which one desires to be in it.

It is believed  in Hinduism that to follow the first important purushartha that is Dharma one needs to have some comfort in life. Hinduism says that a person needs money but it should be accumulated in a right path and following all the purusharthas and not in the wrong path.

It is difficult to give an exact definition of Artha. Various scholars have given different definitions to Artha.  According to John Lochtefeld Artha is defined as  means of life which include  material prosperity.

P. N. Prabhu says Artha is to be understood as referring to all means which are necessary for acquiring worldly prosperity such as wealth.

John Koller says that artha is not an attitude rather it is a very important necessity in human life. However some of the ancient texts give different meaning to Artha. According to some of the texts Artha gives satisfaction of desire to wealth, power and love to God.

Hinduism advocates austerity, simplicity and detachment and attachment from all the worldly pleasures but also advises to accumulate wealth or power by following the other three important Purusharthas in life. It further says that desire to wealth is different as compared to greed for wealth.

Kama is one of the four important goals in Hinduism. The other three are Dharma, Artha and Moksha. The concept of kama was found in the earliest texts of Vedas.

According to Karl Potter kama is an attitude or capacity. The author of kamasutra, Vatsyayana defines kama as happiness.

In his book kamasutra Vatsyayana explains kama as a pleasure an individual experience from the world with one or more senses like hearing, seeing, tasting, smelling with one mind's body and soul. Kamasutra describes art, dance, music with se as a means of pleasure.

The theory of Purushartha does not ask to stop the physical pleasure but on the contrary it describes the inner and outer pleasure during their life time.

The ultimate goal of life in Hinduism and other Indian religions like Buddhism, Jainism is to attain salvation. Moksha also known as vimoksha, vimukti is liberation of life from the cycle of birth and rebirth.

It is believed in Hinduism that a person who follows other three purusharthas like Dharma, Artha and Kama in a proper way would attain moksha. Moksha is the end of life and realization of inner spirituality in man.

A person can achieve liberation from the cycle when he can detach himself from all the desires and pleasures of life.

The concept of Moksha can be seen in Svethavara and Maitri Upanishad. However some of the schools in Hindu philosophy failed to recognize moksha for centuries. The Mimamsa school considered the concept of heaven over moksha.

The concept of moksha appears in three forms that are Vedic, Yogic and bakti.  During the Vedic period moksha was more of rituals. It was believed that one who performs Homa before Agni and also recites Vedas with honesty and purity of mind will attain moksha.

The knowledge was divided into three different levels in vedic period like adhilokam, adibhutam, adhiyajnam and adhyatmam which helped the individual to attain moksha. During the late Upanishads period importance was given more to knowledge rather than rituals.

The personal development and meditation was given more importance during yogic period to attain moksha. The concept of bhakti moksha was different.

It said neither rituals nor knowledge was sufficient to attain moksha. According to bhakti moksha only constant love and deep reflective thought of God all the time would result in perfect union with God which is attaining moksha. According to some bhakti schools God became the beginner and end to train moksha

The six schools of Hindu philosophy have different opinions on moksha. According to Nyaya, Vaisesika and Mimamsa school moksha can be achieved only after death. Samkhya and Yoga school consider moksha is possible during the life period. Some of the hetro school also deny the presence of life or moksha after the death.