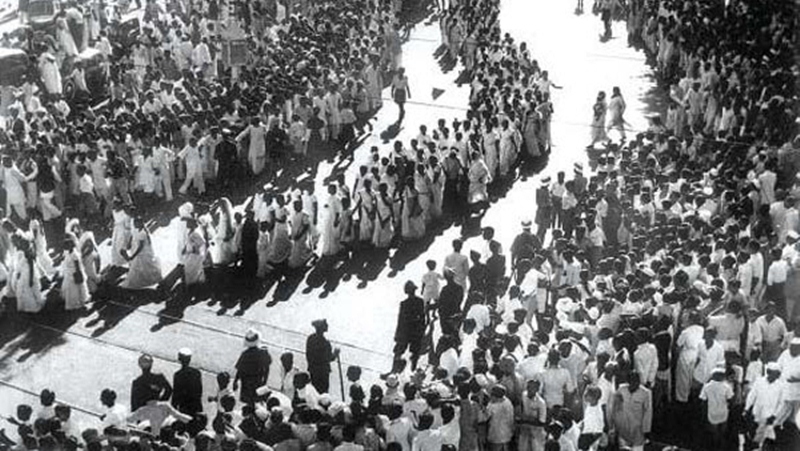 Quit India movement: Political instability was happening all over the world during this period. World War 2 had begun and the British government joined the war by supporting the Germany. The government had not consulted congress of India before joining the war. The government also had stopped provincial autonomy and the civil liberties that were provided after the government of India act of 1935. Congress expressed unhappiness of British joining the war.  On October 10th 1939 congress released a statement condemning the activities in Germany and also stated that India does not support British or Germany in the war. The viceroy to this issued a statement promising to amend the government of India act of 1935 for the establishment of federation of India after the world war. The viceroy also explained the reasons for joining the war. There was widespread dissatisfaction and happiness over the rejection of proposal of congress. At the congress working committee meeting held at Wardha, Gandhiji called for the launch of civil disobedience movement again.

Another important reason to start quit India movement was the failure of Cripps mission. In the year 1942 the British government sent Stafford Cripps along with senior leaders to have a dialogue with Indian nationalist congress and other political parties seeking support of Indians in the war. A draft proposal was written by Cripps in which it was promised for establishment of constituent assembly, right of the provinces to make separate constitutions of its own and full self government after the war was over. Congress was not happy with the report. Gandhiji said ‘as a posted cheque on a crashing bank’. Hence the Cripps mission was a big failure.

In 1942 Japan had occupied large parts of south East Asia including Rangoon in Burma. With growing threat from Japan and World War II Gandhiji took a stern decision and warned British government to free India immediately. On August 8th 1942 the congress party met in Bombay and adopted a resolution called as Quit India resolution. Gandhiji made a speech in the conference and said ‘Do or Die’ to the people of India. The non violent protest spread like a fire all over India. On 9th August members of the congress working committee were arrested and congress was banned. However the quit India movement could not be stopped and people continued without leaders. At many places quit India movement was a huge success. Many congress leaders were working secretly by sending messages through secret radio transmissions and letters. Some of the important leaders who led the movement were Aruna Asaf Ali, Sucheta Kriplani, Ram Manohar Lohia and Jaiprakash Narayan.

The police used violent methods to discharge the mob. Police did lathi charges to disperse the mob. Under these circumstances the quit India movement became violent act and people destroyed symbols of British like rail tracks, post offices, police stations and other offices.  Every Indian like a student, a peasant or a farmer all participated in the movement. People from different states like Bengal, Uttar Pradesh, and Maharashtra started to run a parallel government. Many were shot dead and some students were shot when they were trying to hoist the national flag. Thousands of Indians sacrificed their lives in this movement. But one important thing was that the congress was united throughout the movement. The all India Muslim league did not support the movement. The movement could not continue as it did not have a proper leader. Despite falling ill and bad health Gandhiji started 21 day fast from the jail. In 1944 Gandhiji was released on health grounds.