Dandi march also known as salt Satyagraha was a protest against the salt tax imposed by the British government. It was a nonviolent civil disobedience movement led by Father of India Mahatma Gandhi. Dandi March was one of the most important, historical and inspirational freedom movements of India. The 24-day movement started on 12th March 1930 and ended on 6th April 1930.

Salt production and distribution was a very lucrative business in India. The British had salt monopoly. They introduced a series of laws, wherein the Indian population were banned or prohibited to produce or sell the salt independently. Instead, Indians were made to heavy taxes on the salt. Many Indians, who were poor, could not afford to pay such huge taxes

Salt was taxed in India since very early times.  However British increased the tax on salt to a very large amount. In order to ease and facilitate the import of salt, government imposed special taxes in the year 1835.

Until 1882, Indians were producing salt free of cost from the seawater. Salt was imported from Liverpool which increased the rates on salt. Later the British government set up a salt act in 1882 in which it was stated that government had complete control on collection and manufacturing of salt. The salt act gave British monopoly and the production of salt and to impose salt tax.

Production of salt without the permission from the government was punishable. These stringent salt taxes and the salt act were publicly condemned by the Indians. Even after the crown took over the administration in the year 1858 the salt act was not removed.

Under the new salt law nobody had the right to manufacture salt without the government permission. It could be manufactured and handled only in the official salt depot with a tax of 82 pounds.

Later agitation started against the tax and in the year 1930 Gandhiji started the Dandi March for abolition of tax. On 31st December 1929 the Indian National Congress declared Purna Swaraj and Gandhiji started the civil disobedience movement.  Dandi March was the beginning and important civil disobedience movement. As freedom struggle became more serious and non-violent, British ruined India politically and economically. 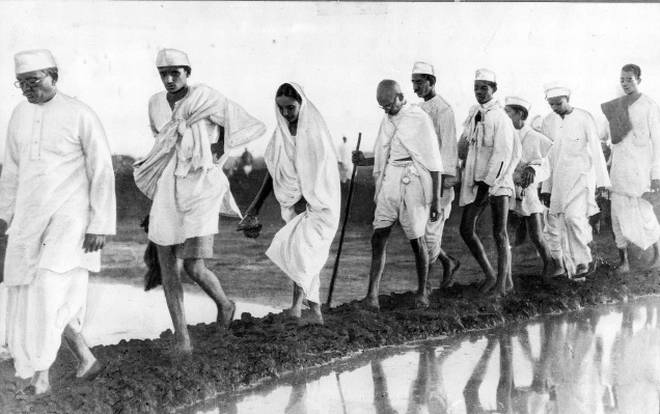 Before starting the march Gandhiji wrote a letter to British Viceroy Lord Irwin about his intentions of civil disobedience movement and starting of salt Satyagraha.  The viceroy ignored and did not reply to the letter. Gandhiji feeling sad exclaimed the following sentence “on bended knees I asked for bread I got stone instead”. Gandhiji was in regular contact with the media worldwide with his intentions of starting salt Satyagraha movement.

On 7th March 1930 Sardar Vallabai Patel was arrested at Ras, who had gone to inspect the facilities for the march that was beginning on 12th March1930.  On 9th March around 75,000 assembled in the ashram to show support for the salt satyagraha. 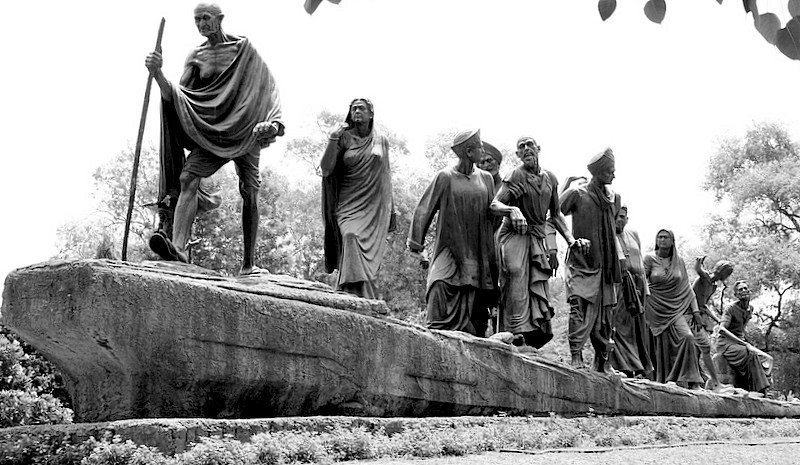 On 12th March 1930 Gandhiji along with many freedom fighters and Sarojini Naidu started the Dandi march from the Sabarmati Ashram. The 25-day march ended on 6th April 1930 at Dandi, a small village in Gujarat.

People wearing white Khadi started the march at 6.30 am from the ashram after doing their regular prayers.  All the workers walked for 240 miles crossing different villages.

The march crossed 4 districts and 48 villages. On the first day Gandhiji and other members walked for 21kms and ended in the village of Aslali. Thousands of villagers and satyagrahis joined Gandhiji every day from different villages.

On reaching the village Dandi nearly 50,000 villagers and workers had joined in the protest. On 6th of April Gandhiji and his followers reached Dandi. They took a hand full of seawater and boiled it to produce salt. What had begun just as salt Satyagraha became a mass movement.

Thousands of people including Gandhiji was arrested. there was a widespread civil disobedience movement across India. People believed Gandhiji as a mass leader. Apart from the salt tax other taxes like the land tax, forest laws were also defied by the people.

People started to reject the clothes and the goods of the British. The British who was very angry with the movement declared the congress and its associates as illegal.  Salt depots were raided. Nearly 95,000 workers were arrested by the British.

Gandhiji was arrested on March 4th from his temporary ashram at karadi which was close to Dandi village. With the arrest of Gandhiji the salt satyagraha ended but it had a huge impact on the freedom struggle.

The British government imposed even more strict and harsh laws on the Indians. It also imposed censorship on Indian media and journalism.  Whatever Dandi March had a great impact on the Indians to gain freedom from British.

Mahatma Gandhiji was released from the prison in January 1931. He met Lord Irwin who wanted to put an end to this movement. A truce was declared, and Gandhi Irwin Pact was signed on March 5th, 1931. This further led to Second Round Table Conference at the end of 1931.

Even though the Salt Satyagraha or Dandi March did not produce immediate effect, but it gathered large crowd and attention worldwide. The British realized that their control of India is possible only with the consent of Indians. Dandi March was a significant step towards India's Independence.