The Revolt of 1857 began on 10th May 1857 at Meerut, as sepoy mutiny against the British. East India company had established supremacy over most part of India by harsh treatment towards Indians. Even after the Battle of Plassey and Buxar British were able to establish supremacy This revolt shook the very basic foundation of British rule in India. The simmering discontent against the British led to this famous revolt also known as Sepoy mutiny or first war of Independence. Many causes led to the revolt. Among them some of the major causes are

Political causes for the revolt of 1857: After the doctrine of Lapse and subsidiary alliance many Indian states went under the control of British rule. One of the major annexations was the state of Awadh.

British annexed Awadh on the grounds of misgovernment by Nawab Wajid Ali Shah. Awadh which became a buffer state accepted all the conditions of subsidiary alliance. The state administration collapsed, and people were the real sufferers. The annexation of Awadh was one of the major political reasons for the revolt. Many soldiers, tradesmen, craftsmen lost their jobs.

Under the new land revenue system many zamindars lost their lands and peasants were made to pay heavy taxes. This made peasants poorer and lose all their lands.

Social causes for the revolt of 1857:  British started slowly the divide and rule policy. They introduced many social reforms which were controversial as per Hindu and Islamic law. Widows were allowed to remarry.

Caste system was high during this period. The system of upper caste and lower caste was prevalent. The British made both upper castes and lower castes people to live in same prison and railway coaches. The Europeans made both Hindus and Muslims convert to Christianity. Temples and mosques were made to pay heavy taxes

Military causes of revolt of 1857 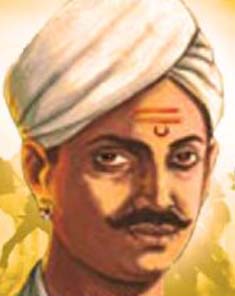 Military causes for the revolt of 1857: In the year 1856, a new rifle called as Enfield was introduced in to the company’s army. This rifle used cartridge with greased cap. This greased cap had to bitten before using it in the rifle. The cartridge was smeared with cow and pig fat.

The Hindu and the Muslim Sepoys rejected to use this rifle as it was against their religious laws to eat the fat of cows and pigs. On 29th March 1857, one soldier called as Mangal Pandey stationed at Barrackpore joined together with other Sepoys to revolt against the use of new cartridge. Due to this action Mangal Pandey was arrested and hanged till death. This raged other Sepoys.

Even though there was already unrest in Bengal army, Lt col. George Carmichael-Smyth, the commanding officer of the 3rd Bengal light cavalry ordered all the 90 soldiers to use the new cartridge. All Sepoys except five Sepoys refused to use the cartridges.

Hence, they were imprisoned for 5years with hard labour work. A month later many Sepoys in Meerut refused to use this new rifle. All of them were sentenced to 10years imprisonment.

Due to this the Sepoys of Meerut marched towards Delhi massacred the British troops and freed the jailed Sepoys. The Sepoys made the Mughal emperor Bahadur Shah 2 as the ruler of Sepoys and the rebellions. Quickly the revolt spread to whole of North India.

Many rulers agreed to follow Bahadur Shah 2. Bahadur shah was tried in Delhi and later exiled to Rangoon where he later died in the year 1862. Some of the important leaders who followed were Nana Saheb, a Maratha leader, Ahmed Ullah. Bakht Khan of Bareilly served in the British army led a band of rebels to Delhi. Under his guidance and power Bakht Khan was able to keep British from Delhi for several weeks.

The revolt spread to various other places Kanpur, Lucknow, Arrah, Barelliey, Jhansi and Gwalior.  The sepoys won the support of nobles, landlords, artisians and peasants. Tantia tope and Azimullah Khan led his troops. But the British were able to capture Kanpur. Nana Saheb fled to Nepal, Tantia Tope and Azimullah were captured and executed. After the execution of all important leaders, the Britishers dealt with these rebels ruthlessly.

Another important event for the revolt of 1857 was the siege of Cawnpore (Kanpur). The company forces in Cawnpore were unprepared and hence surrendered to the rebels with a request to go to Allahabad.

But however, the evacuation from Cawnpore to Allahabad turned out to be a massacre as most of them were killed by the rebels. 120 British women and children were killed. This massacre was called as Bibighar Massacre. But the company captured Cawnpore again and hit back on the rebels and took revenge for the massacre.

The main result was the end of East India company’s rule in India. The British crown took direct control over the administration of British Indian territories in 1858. The governor general designation was changed to viceroy. The queen made it clear that there would be no distinction between caste, race, creed, religion.

Due to the support shown by some of the Indian rulers the crown showed loyalty by discontinuing the Doctrine of Lapse and promised not to annex any territories under this old rule.

The British promised not to interfere in the religious and social customs practised in India.

The army was reorganised to keep under the control of British army. The proportion between Indian soldiers to that of European soldiers increased. The British began to recruit few soldiers from Awadh, Bihar, Madras.

The British also appreciated the zamindars loyalty and recognised their traditional land rights.

Reasons for the failure of revolt of 1857

Reasons for the failure of revolt:

Whatever may be the result of the revolt it had huge impact on British rule. British realized that they need to be more considerate if they have rule such a big country as well as they had to start deploying new strategy to continue to rule India.  Policy of 'divide and rule' hence gave birth as a result of revolt of 1857