The Hungry Tigress and Bodhisattva

The hungry tigress and Bodhisattva:

A story from Jataka Tales. Once upon a time there lived a young boy in a small village. It was Bodhisattva who took birth as a human in a noble family. He grew as a smart young kid with a lot of love and respect to all the living beings in the world. 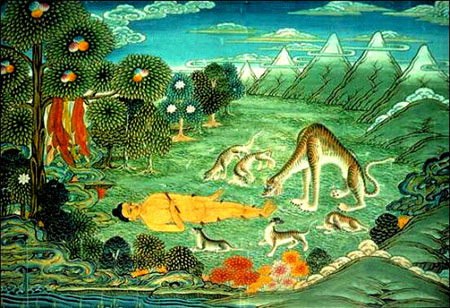 He saw the tigress which was dying out of hunger trying to kill its own cubs to eat. Bodhisattva felt very bad and he did not want the tiger to suffer from the guilt of eating its own cubs. Bodhisattva thinks of how he can help to save both mother and tiger cubs.

So much to learn from The hungry tigress and Bodhisattva

He comes with a plan and sends back his disciples to complete some work. The disciples could understand the plan of Bodhisattva but could not do anything. They were moved by the love and kindness of their teacher.

Bodhisattva had decided to offer himself to the tigress as food so that he could save the life of cubs. Later after the disciples went to complete their work, Bodhisattva  went to the tigress and allowed the tigress to devour him. The tigress ate him and satisfied its hunger. It also gave the food to the cubs.

After a while when the disciples returned to meet Bodhisattva, they realised what happened as they saw the blood stains of the Bodhisattva. They felt very sad and understood that the hermit had offered himself to the tigress so that she would not kill her own cubs. That was the love and affection he had for all the living beings.

According to the Jataka stories Bodhisattva was one of the previous incarnations of Gautam Buddha. It is one of the amazing stories for kids as well as for the whole society to understand the love of Bodhisattva. It clearly tells us to shower love and kindness to the living beings. We should never hurt anyone but if possible try to help others in the best possible way.