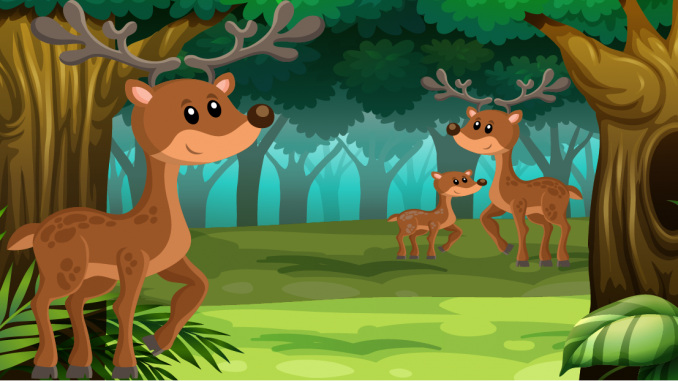 One of the best Jataka Tales is the Banyan Deer. Let's read the story and enjoy and understand the moral of the story.

Once upon a time in the city of Benares in India a beautiful deer was born in the forest. The Deer had sparkling eyes and its hooves were as black as coal. The Deer was golden in color with silver color horns.

As he grew up he became the king of Banyan Deer and was the leader of a herd of 500 deer. In the same forest not very far off there was another herd of 500 Deer and whose king was named as Branch Deer.

The King of Benares was extremely fond of the meat of Deer He went to different villages to hunt the Deer or sometimes he even asked his subjects to hunt for him and serve him the meat. 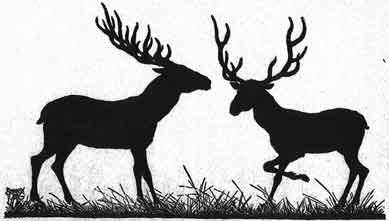 Poor villagers had to leave their daily household jobs and had to accompany their majesty in the job of hunting. They grew fewer crops and could not sufficiently earn.  The villagers got tired of this and thought of a plan to get rid of this job.

The villagers decided to build a deer park for the king. They built a huge royal deer park and made trenches and holes to trap the deer. Inside the park they made a small pond. They also erected many trees and grasses as food for the deer.

After completing the park the villagers went to the nearby forest and with the help of sticks and weapons they drove both the herd of deer to the park and closed the gates. Later the villagers invited the king to visit the park.

The villagers allowed the deer to settle down in their new home for a few days.  Later they invited the king to come and see the new deer park. The king was very happy and at once went to see the deer park.

Everyday the king or his soldiers would come and kill a deer. That would be served for his dinner. Days passed and all the deer were living in fear. As soon as they heard the sound of bow and arrow poor deer used to run for their lives.

Seeing the fear of all the deer both the kings of the deer thought along with their herd had a meeting. They decided in the meeting that instead of living in fear, let one deer sacrifice itself everyday from both the herd. In this way at least the other deer can stay in peace till their chance comes to sacrifice.

Everyone agreed to this decision and everyday one deer would go and sacrifice its life for the king. Days passed and poor deer would go and sacrifice its life. One day it was the chance of the doe from the Branch deer herd who had just given birth to a baby. She went to the King Branch deer and requested him to spare her life for a few days until the baby became a little older. But the king did not agree.

So she went to Banyan deer to try her luck. The King Banyan deer heard her problem with a lot of patience. The Banyan deer said “ Go home and take care of your baby. Some other deer will go in your place to die”

The banyan deer went to the execution box and laid his golden neck to the butcher. The butcher ran to the king to inform him about the incident. The king was very surprised and went to the park and said to the banyan deer that “ oh golden deer did I not promise to spare your life? Why have you come to die today?

The banyan deer answered to the king saying that he wanted to save the life of the mother deer and her baby. So he had no choice but to come himself.

On hearing his words the King of Banaras was very pleased and said that he would spare her life as well. I cannot kill you for your bravery and compassion. Tears rolled down from his cheeks and felt very ashamed for killing the deer before.  The king of Benaras further promised that he will not kill any deer from both the herd. Finally both the herd remained happily thereafter.

Moral : Be kind to everyone.